At a speech to elite businessmen, Justin Trudeau said that 'Canada encourages China to do more to promote and protect human rights' 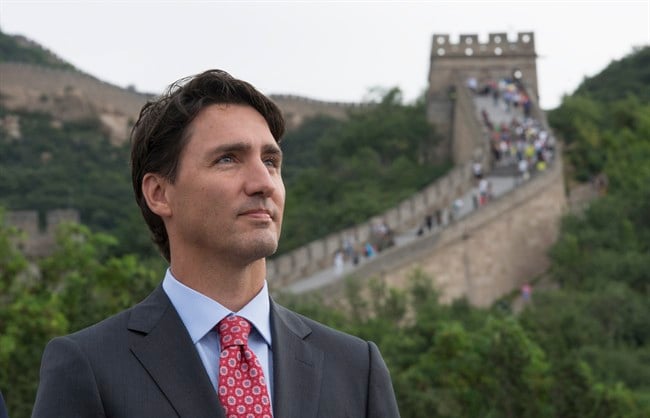 Canadian Prime Minister Justin Trudeau looks on as he takes in a view of the Great Wall of China, in Beijing on Thursday, September 1, 2016. (Adrian Wyld/CP)

SHANGHAI – Justin Trudeau set his sights squarely on China’s human rights record Thursday, painting Canada as a straight-talking champion of personal freedoms as he lectured an elite business crowd on the value of good governance and free expression.

The prime minister’s direct remarks came during a week-long official visit to China aimed at forging deeper commercial and cultural bonds between the two countries.

Building closer economic ties will make it easier for China and Canada to speak frankly about governance, human rights and the rule of law, Trudeau told several hundred people at an event hosted by the Canada China Business Council.

“I remind everyone that as a country that has seen first hand the benefits of free expression and good governance — Canada encourages China to do more to promote and protect human rights,” he said in his 22-minute speech.

“In the global village, we all have stake in what happens here.

“The success of the world is inexorably linked to China’s success, and I know that these are not easy conversations to have, but they are necessary ones.”

Trudeau also said that freedom of expression is a “true Canadian value” protected by the country’s Charter of Rights and Freedoms.

He noted that he told both President Xi Jinping and Premier Li Keqiang in meetings this week in Beijing that accepting a diversity of perspectives will strengthen China, just like it has in Canada.

Trudeau even went so far as to broach the subject of gender equality.

“See, we’re Canadians — we travel with our values and we don’t hesitate to share them whenever and wherever we see opportunities,” he said before glancing purposefully at the table in front of the stage.

It’s not the first time a Canadian prime minister has spoken bluntly while in China about the ever-present issue of that country’s human rights record. During a landmark 1998 visit, Chretien told students at Beijing University that Canadians find it disturbing to “hear of people being harassed or imprisoned for expressing political views different from the government.”

In the past, the Chinese leadership has not taken kindly to public criticism of its human rights record, particularly from western countries.

On Tuesday, with Trudeau’s face gracing newspaper front pages, the state-run Xinhua news agency scolded Canada for allowing “groundless” human rights concerns to hinder what could be a productive relationship with China.

It also urged Canada to look within its borders at its own reputation on the treatment of Aboriginal Peoples, some of whom live in “miserable conditions.” The item added the “so-called human rights issue” comes from the “West’s long-standing prejudice and arrogance against China.”

On Wednesday, Canada’s ambassador to China, Guy Saint-Jacques, said the country has been moving backwards over the past three years when it comes to personal freedoms, particularly its censorship of the Internet.

“That’s why Canada has used opportunities to express its views to China,” Saint-Jacques said.

Trudeau’s speech also discussed the vast economic potential for both countries across numerous traditional industries like natural resources, but also in newer sectors like clean technology.

“We know that when we do build strong and resilient relationships, when we give Canadian businesses more opportunities to succeed — they will succeed,” he said.

“That means more better paying jobs for Canadians — and when Canadian companies partner with Chinese companies, it means more and better-paying jobs here in China as well.”

Earlier Thursday, the Trudeau government announced that Canadian and Chinese companies had signed 56 new commercial contracts and agreements worth $1.2 billion.

Ottawa also said it would open seven additional visa application centres in China to help serve a growing number of Chinese tourists who would like to visit Canada.

Boosting tourism is also part of the government’s plan to build a closer link to China, which has the world’s second-largest economy and an expanding middle class.

The Canadian envoy to China said Thursday that until now, visa offices for Chinese tourists were limited to cities where Canada has a diplomatic presence.

“This is an important element that Prime Minister Trudeau is promoting in his visit to China,” said Guy Saint-Jacques, who joined Trudeau at the Great Wall of China for an announcement that the countries would co-operate on the development of Chinese national parks.

Chinese tourist travel to Canada rose 24 per cent in the first six months of this year, Saint-Jacques said. He noted that now only Americans and Brits visit Canada more than the Chinese.

After the national parks announcement, Trudeau explored a section of the Great Wall with his wife Sophie Gregoire and their daughter, Ella-Grace.

The portion of the Wall they walked was temporarily closed to the public — providing them with a peaceful section to stroll, away from the usual hordes of visitors.

Trudeau also met Thursday with Zhang Dejiang, chairman of the National People’s Congress at the Great Hall of the People in Beijing.

On Friday, the prime minister will hold an event at a high school with former NBA basketball star Yao Ming, meet with executives of Fosun Group and Cirque du Soleil and participate in a roundtable with women entrepreneurs.