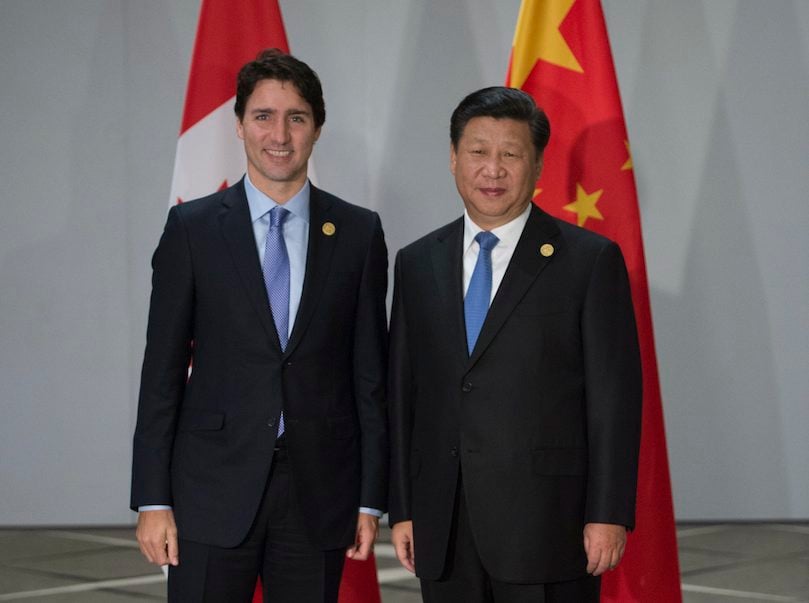 Prime Minister Justin Trudeau is greeted by Chinese President Xi Jinping as they take part in a bi-lateral meeting at the G20 Summit in Antalya, Turkey on Monday, November 16, 2015. THE CANADIAN PRESS/Sean Kilpatrick

ANTALAYA, Turkey — Justin Trudeau pledged to strengthen co-operation with China after his father’s historic engagement with the nation received a glowing tribute Monday from President Xi Jinping at the G20 summit.

The Chinese leader lauded what he called the extraordinary vision of the prime minister’s father, Pierre Elliott Trudeau, for reaching out to his country and establishing formal diplomatic relations 45 years ago.

“I’m well aware we have an opportunity to set a fresh approach in our relationship right now,” Trudeau told Xi before a bilateral meeting Monday. “I certainly hope that this is going to be an era of greater co-operation and mutual benefit for both Canada and China in the coming years.”

Trudeau told the Chinese leader he wanted to “work together on economic political and cultural ties” during public remarks prior to their meeting.

Reiterated my desire to work closely with Xi Jinping and China to expand our strong existing relations #G20 pic.twitter.com/ZXs6dvKioD

“On human rights, the prime minister did say that they would not always agree, but part of having a strong relationship involves expressing concerns and disagreements in a respectful way,” a Trudeau spokesman told reporters in an email.

The two leaders also discussed the possibility of a free trade agreement, the statement said.

Trudeau and many of his fellow G20 leaders were headed to Manila, the Philippine capital, for this week’s Asia Pacific Economic Co-operation summit.

But in his meetings with Xi and Indonesian President Joko Widodo in Turkey, Trudeau was using the G20 summit to get a head start on deepening Canada’s economic relations in Asia, a priority he identified in his instruction letters to his new cabinet.

China’s then premier chided Harper for taking three years to visit his country.

Relations between Canada and China had deteriorated during Harper’s first three years in power. But after Canadian business leaders sounded alarm bells, the Conservatives made a concerted effort to reengage with China.

On Monday, Xi was effusive in his praise for the elder Trudeau’s efforts to establish ties with China in 1970. Two years later, the United States followed suit under President Richard Nixon.

“That was an extraordinary political vision,” Xi told the prime minister. “China will always remember that.”

“I celebrate well 45 years of strong relations between Canada and China,” Trudeau replied, as he also extended an invitation to the Chinese leader to visit Canada.