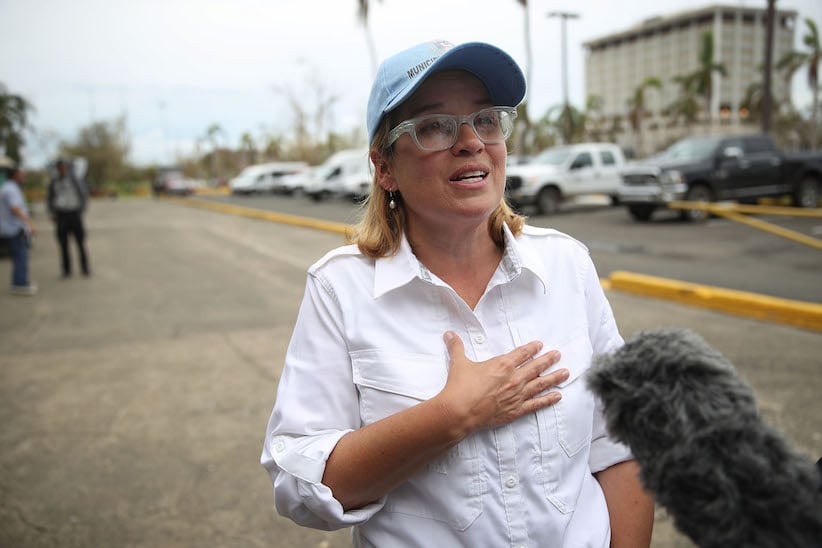 SAN JUAN, PUERTO RICO – SEPTEMBER 30: San Juan Mayor Carmen Yulin Cruz speaks to the media as she arrives at the temporary government centre set up at the Roberto Clemente stadium in the aftermath of Hurricane Maria on Sept. 30, 2017 in San Juan, Puerto Rico. Puerto Rico experienced widespread damage including most of the electrical, gas and water grid as well as agriculture after Hurricane Maria, a category 4 hurricane, passed through. (Photo by Joe Raedle/Getty Images)

BRANCHBURG, N.J. — President Donald Trump on Saturday lashed out at the mayor of San Juan and other officials in storm-ravaged Puerto Rico, contemptuous of their claims of a laggard U.S. response to the natural disaster that has imperiled the island’s future.

“Such poor leadership ability by the Mayor of San Juan, and others in Puerto Rico, who are not able to get their workers to help,” Trump said in a series of tweets a day after the capital city’s mayor appealed for help “to save us from dying.”

“They want everything to be done for them when it should be a community effort,” Trump wrote from his New Jersey golf club.

The tweets were a biting attack on the leader of a community in crisis. After 10 days of desperation, with many still unable to access essentials including food and water, San Juan Mayor Carmen Yulin Cruz accused the Trump administration Friday of “killing us with the inefficiency” after Hurricane Maria. She implored the president, who is set to visit the U.S. territory on Tuesday, to “make sure somebody is in charge that is up to the task of saving lives.”

“I am begging, begging anyone that can hear us, to save us from dying,” Cruz said at a news conference, her voice breaking with rage.

It was an unusually pointed rebuke from the president in the heat of a disaster—a time when leaders often put aside partisan differences in the name of solidarity. But it was a reminder of Trump’s unrelenting penchant for punching back against critics, whatever the circumstances.

Trump has said he’s doing everything possible to help the “great people of PR!” and has pledged to spare no effort to help the island recover from Maria’s ruinous aftermath. He has also repeatedly applauded his government’s recovery efforts, saying military personnel and first responders have done “an amazing job,” despite the significant logistical challenges.

Thousands more Puerto Ricans have received water and rationed food as an aid bottleneck has begun to ease. But many, especially outside the capital, remain desperate for necessities, including water, power and fuel.

Trump’s administration has tried in recent days to combat the perception that he failed to quickly grasp the magnitude of Maria’s destruction and has given the U.S. commonwealth less attention than he’d bestowed on states like Texas, Louisiana and Florida after they were hit by hurricanes Harvey and Irma. Trump had repeatedly praised the residents of those states as strong and resilient, saying at one point that Texas could “handle anything.”

But after a week of growing criticism, the president’s patience appears to be waning.

“The Mayor of San Juan, who was very complimentary only a few days ago, has now been told by the Democrats that you must be nasty to Trump,” the president charged, without substantiation.

FEMA administrator Brock Long also piled on: “The problem that we have with the mayor unfortunately is that unity of command is ultimately what’s needed to be successful in this response,” he said, requesting that she report to a joint field office.

Cruz declined to engage in the tit-for-tat, instead calling for a united focus on the people who need help. “The goal is one: saving lives. This is the time to show our ‘true colours.’ We cannot be distracted by anything else,” she tweeted, along with photos of herself meeting with residents and rescue workers, wading hip-deep through a flooded street and comforting an elderly woman.

After a day of tweets criticizing the news media, Trump seemed to echo the sentiment: “We must all be united in offering assistance to everyone suffering in Puerto Rico and elsewhere in the wake of this terrible disaster.”

MORE: How Donald Trump’s past with pro football revealed his true self

Trump’s Saturday tweets are the latest example of his insistence on “punching back,” even against those with far less power. After a deadly terror attack in London in June, for instance, Trump singled out London Mayor Sadiq Khan, suggesting he wasn’t taking the attacks seriously enough.

She called Cruz’s remarks a passionate outcry “from a woman who loves her community and the people in it, has watched it be destroyed and is now watching people die.”