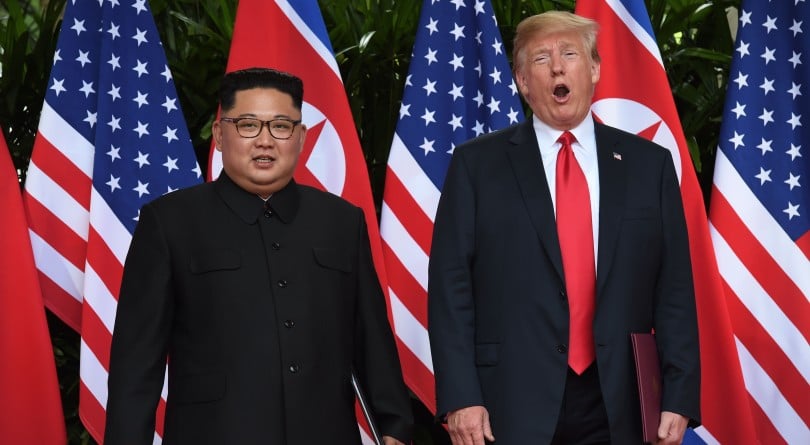 North Korea's leader Kim Jong Un poses with US President Donald Trump after taking part in a signing ceremony at the end of their historic US-North Korea summit in Singapore on June 12, 2018. (Anthony Wallace/AFP/Getty Images)

Here’s what the U.S. president said:

It’s my honour today to address the people of the world following this historic summit with Chairman Kim Jong-un of North Korea.

We spent very intensive hours together and I think most of you have gotten the signed document or will very shortly. It’s very comprehensive—it’s going to happen.

I stand before you as an emissary of the American people to deliver a message of hope and vision, and a message of peace.

Let me begin by thanking our incredible hosts in Singapore, especially Prime Minister Lee [Hsien Loong], a friend of mine.

This is a country of profound grace and beauty, and we send our warmest wishes to every citizen of Singapore, who really made this visit so important and so pleasant, despite all of the work and all of the long hours.

I also want to thank President Moon [Jae-in] of South Korea. He’s working hard. In fact, I’ll be speaking with him right after we’re finished. Prime Minister [Shinzō] Abe of Japan, a friend of mine, just left our country. And he wants what’s right for Japan and for the world. He’s a good man. And a very special person, President Xi [Jinping] of China, who has really closed up that border, maybe a little bit less so over the last couple of months but that’s okay. But he really has, and he’s a terrific person and a friend of mine and a great leader of his people.

I want to thank them for their efforts to help us get to this very historic day. Most importantly, I want to thank Chairman Kim for taking the first bold step toward a bright new future for his people. Our unprecedented meeting, the first between an American president and leader of North Korea, proves that real change is indeed possible.

My meeting with Chairman Kim was honest, direct and productive. We got to know each other well in a confined period of time, under of very strong, strong circumstance.

We’re prepared to start a new history, and we’re ready to write a new chapter between our nations. Nearly 70 years ago, think of that, 70 years ago, an extremely bloody conflict ravaged the Korean Peninsula. Countless people died in the conflict, including tens of thousands of brave Americans. Yet while armistice was agreed to, the war never ended, to this day, never ended.

And, as history has proven over and over again, adversaries can indeed become friends. We can honour the sacrifice of our forefathers by replacing the horrors of battle with the blessings of peace. And that’s what we’re doing and that’s what we have done.

There is no limit to what North Korea can achieve when it gives up its nuclear weapons and embraces commerce and engagement with the rest of the world that really wants to engage. Chairman Kim has, before him, an opportunity like no other, to be remembered as the leader who ushered in a glorious new era of security and prosperity for his people.

Chairman Kim and I just signed a joint statement in which he reaffirmed his unwavering commitment to complete denuclearization of the Korean Peninsula. We also agreed to vigorous negotiations to implement the agreement as soon as possible, and he wants to do that.

This isn’t that past. This isn’t another administration that never got it started. And, therefore, never got it done. Chairman Kim has told me North Korea is already destroying a major missile engine testing site. That’s not in your signed document. We agreed to that after the agreement was signed. That’s a big thing. For the missiles that they were testing, the site is going to be destroyed very soon.

WATCH: Trump had previously pulled out of the June summit

Chairman Kim has the chance to seize an incredible future for his people. Anyone can make war, but only the most courageous can make peace. The current state of affairs cannot endure forever. The people of Korea, North and South, are profoundly talented, industrious, and gifted. These are truly gifted people. They share the same heritage, language, customs, culture, and destiny. But to realize their amazing destiny: to reunite their national family, the menace of nuclear weapons will now be removed.

In the meantime, the sanctions will remain in effect. We dream of a future where all Koreans can live together in harmony, where families are reunited and hopes are reborn, and where the light of peace chases away the darkness of war.

People thought this could never take place. It is now taking place. It’s a very great day. It’s a very great moment in the history of the world, and Chairman Kim is on his way back to North Korea. And I know for a fact that as soon as he arrives, he’s going to start a process that’s going to make a lot people very happy and very safe.

So it’s an honour to be with everybody today. The media—there’s a big gathering of media, I will say. It makes me feel very uncomfortable, but it is what it is. People understand that this something very important to all of us, including yourselves and your families. So, thank you very much for being here. We’ll take some questions.

MEDIA: What did Kim Jung Un say to you to give you the confidence that for once in the history of North Korea they are not cheating the system and gaming the world and gaming the people who are actually going to have to go in and make sure they are actually giving up their nuclear arsenal?

TRUMP: Very fair question. He actually mentioned the fact that they proceeded down a path in the past and ultimately as you know nothing got done. In one case they took billions of dollars during the Clinton regime … and nothing happened. That was a terrible thing. And he actually brought it up to me. And he said we have never gone this far, I don’t think they’ve ever had the confidence frankly in a president that they have right now for getting things done and having the ability to get things done. And he was very firm in the fact that he wants to do this. I think he might want to do this as much or even more than me. Because they see a very bright future for North Korea. So you never know, right, we never know. But I’ll tell you what, we signed a very comprehensive document today…and I believe he’s going to live up to that document. In fact, when he lands, which going to be shortly, I think that he will start that process right away.

MEDIA: The denuclearization and biological weapons and whatnot is one problem in North Korea. Another huge problem is the horrible record they have on human rights. Was that discussed at all?

Trump: It was discussed, it will be discussed more in the future – human rights. What was also discussed in great detail John was the fact that – I must have had countless calls and letters: Please, anything you can do. They want the remains of their sons back, they want the remains of their fathers and mothers and all of the people that got caught in that really brutal war which took place to a large extent in North Korea. I asked for it today and we got it, that was a very last minute (request). The remains will be coming back. They are going to start that process immediately. But so many people even during the campaign they would say is there any way you can work with North Korea to get the remains of my son back or my father back. So many people asked me this question and I said look, we don’t get along too well with that particular group of people. But now we do. And he agreed to that so quickly, it was really a very nice thing and he understands it, he understands it. So for the thousands and thousands – way over 6,000 that we know of in terms of the remains — they’ll be brought back.

MEDIA: What timetable do you envision for their denuclearization and in the meantime are you thinking about easing any sanctions?

TRUMP: You know scientifically, I’ve been watching and reading a lot about this, and it does take a long time to pull off complete denuclearization, it takes a long time. Scientifically you have to wait certain periods of time and a lot of things happen. But despite that, once you start the process it means it’s pretty much over, you can’t use em. That’s the good news, and… I believe that’s going to start very soon. We will do it as fast as it can mechanically and physically be done, Steve.

MEDIA: Can you clarify, when you said you’re stopping war games, so you are stopping the military exercises with South Korea?

TRUMP: We’ve done exercises for a long period of time, working with South Korea. We call them war games, and I call them war games and they are tremendously expensive…. we pay for a big majority of them. We fly in bombers from Guam. When I first started I said where do the bombers come from? Guam, nearby. I said, oh great, nearby, where’s nearby? Six and half hours. Six and half hours, that’s a long time for these big massive planes to be flying to South Korea to practice and then drop bombs all over the place and then go back to Guam. I know a lot about airplanes, it’s very expensive and I didn’t like it. And I think it’s very provocative, I have to tell you Jennifer, it’s a very provocative situation. When I see that and you have a country right next door. So under the circumstances that we are negotiating a very comprehensive, complete deal, I think it’s inappropriate to be having war games. So number one we save money, a lot, and number two it reallyis something that I think they very much appreciated.

With files from Kyle Edwards and Tom Yun