Trump, taking a knee in the NFL and the true meaning of patriotism

Scott Gilmore: The Pentagon pays big for the NFL's patriotic displays. Players taking a knee are the only ones not acting out of self interest. 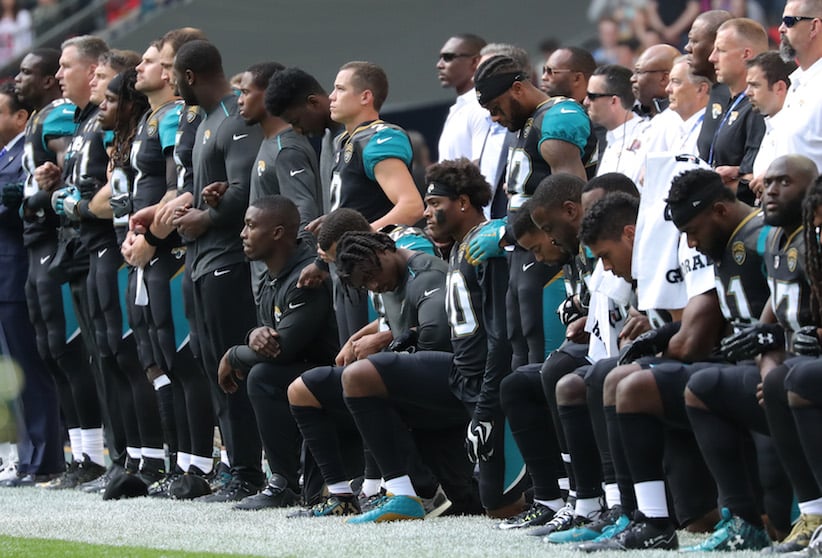 LONDON, ENGLAND – SEPTEMBER 24: Jacksonville Jaguars players kneel during the playing of the national anthem against the Baltimore Ravens at Wembley Stadium on September 24, 2017 in London, United Kingdom. (Photo by Mitchell Gunn/Getty Images)

I try not to be cynical. But weeks like this make it hard.

On Friday night, President Trump traveled down to Huntsville, Ala., for a campaign rally. Standing on stage, he paused mid-ramble, and struck his “Il Duce” pose: both hands gripping the lectern, his chin lifted up and to the right, lips pursed and heavy lids. He had important things to say.

A cataclysmic hurricane has left over three million Americans in Puerto Rico without power and water. The government of North Korea just declared a nuclear attack on the U.S. is “inevitable.” A new health care bill is being pushed through Congress that would uninsure tens of millions of people. Multiple investigations are uncovering more and more evidence of Russian intervention in the U.S. election. Nazis are a thing again.

But the president wanted to talk about football. He said, “Wouldn’t you love to see one of these NFL owners, when somebody disrespects our flag, to say, ‘Get that son of a bitch off the field right now. Out! He’s fired. He’s fired!’ ”

Judging from the cheering crowd, this was a popular opinion.

Trump was talking about football players who have been taking a knee during the Star-Spangled Banner to protest racism in America. This has turned into a controversial issue. Owners, fans, and other players have called it inappropriate, disloyal, ungrateful and unpatriotic.

Ironically, even just a few years ago these words would have applied to the entire league. Because standing for the national anthem is a new thing. Players and coaches used to stay in the locker room or sit on the sidelines.

This changed in 2009, because the Pentagon had a problem. The military had failed to meet its recruitment targets for years, largely because joining the armed forces all but guaranteed a deployment to Iraq or Afghanistan to join in wars that that had been burning since 2001 with few obvious victories to show for it. Even with high unemployment rates, finding more young men to fight these unpopular wars was a struggle. What’s worse, by the military’s own estimate, only one per cent of Americans are fit enough, educated enough, and inclined to put on a uniform. So where do you find these folks? At football games.

Therefore the Pentagon began paying the NFL to help its recruitment efforts. It brought vets on the field, added flags, F-15s flew over, military bands played in the stands, and the owners were asked to trot out the players for the anthem. It’s marketing 101—if your favourite sports star is saluting Old Glory, you’re more likely to sign on the line which is dotted. And, guess what? It worked. That year the forces met their recruitment targets for the first time in years.

Since then, according to a recent Senate report, the Department of Defense has spent $53 million for patriotic displays at sporting events, including one at a Seattle Seahawks game where 10 soldiers re-enlisted on the field during a pre-game show.

Meanwhile, social media began to expand. Twitter users increased from 30 million in 2009 to 328 million today. This brought us memes, cute cats, and cops killing unarmed black men. To be fair, this had been happening for decades. In fact, in the 1970s, by some estimates, cops were shooting 10 times as many people. But they weren’t being filmed doing it, and those clips weren’t being transmitted into our pockets.

But now we’re watching the bloodshed on a daily basis, and we’re watching one officer after another being exonerated. Like the cop who said, “I’m gonna kill this motherf–ker.” Then killed him. Then planted a gun. Then was acquitted anyway last week.

And now a man who started his career by banning blacks from his rental properties is president. And Friday night, down in Alabama, a state that only stopped lynching blacks in 1981, he held a rally with white people, angrily denouncing “ungrateful” blacks. We used to call that a Klan rally, which is probably why the KKK are such enthusiastic supporters of Trump.

So, how is it possible to not be cynical? How can you know any of this, and not give up on it all? Endless wars. Racism. Institutionalized injustice. Greed. Ignorance. And that is just from unpacking one thread of one speech by one politician.

Maybe this is what you have to do: focus on the guys kneeling. In this whole ugly, sprawling mess, the only people who are not acting out of self-interest, who are trying to make things better, to make things a little more just, are the guys on their knee. And today, the day after the president denounced them as sons of bitches, there are more of them than there were yesterday. So, maybe there’s hope. It would be nice to think so.