The rain from Harvey is officially the heaviest tropical downpour in U.S. history

By Nomaan Merchant And Juan Lozano, The Associated Press August 29, 2017 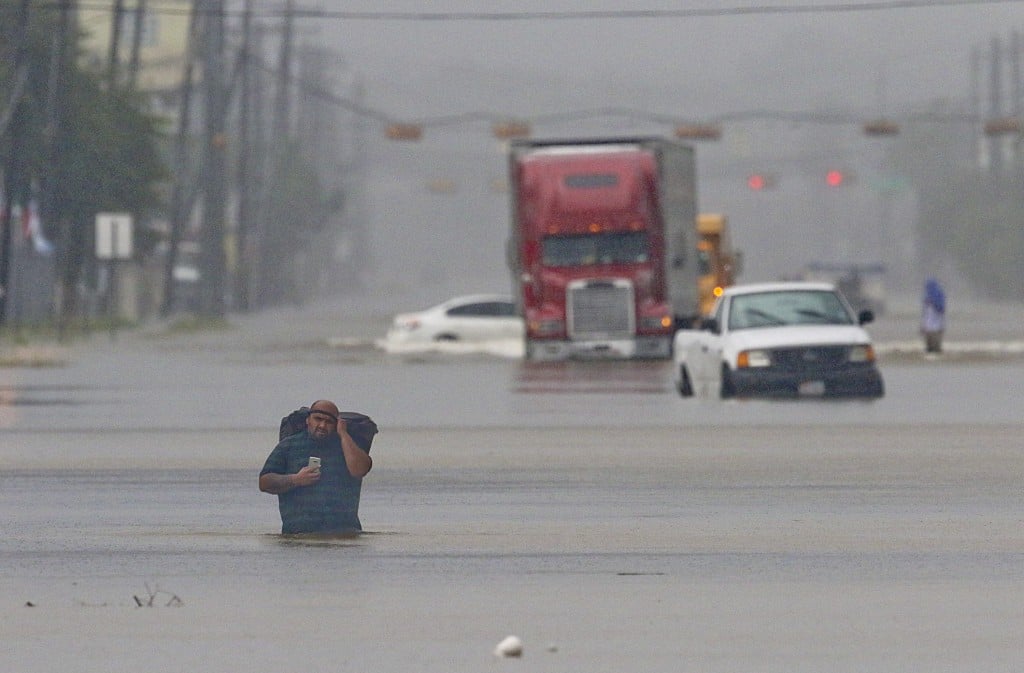 A man carries his belonging as he walks through the flooded waters on Telephone Rd. in Houston on August 27, 2017 as the US fourth city city battles with tropical storm Harvey and resulting floods. (THOMAS B. SHEA/AFP/Getty Images)

HOUSTON — As the human toll and the strain on flood defences mounted, the city of Houston moved Tuesday to open two and possibly three more mega-shelters, and the rain from Harvey officially became the heaviest tropical downpour in U.S. history.

Louisiana’s governor offered to take in Harvey victims from Texas, and televangelist Joel Osteen opened his Houston megachurch, a 16,000-seat former arena, after critics blasted him on social media for not acting to help families displaced by the storm.

“We are not turning anyone away. But it does mean we need to expand our capabilities and our capacity,” Turner said. “Relief is coming.”

Louisiana Gov. John Bel Edwards said he expects Texas officials to decide within 48 hours whether to accept his offer, which comes as Louisiana deals with its own flooding. About 500 people were evacuated from flooded neighbourhoods in southwest Louisiana, Edwards said.

In all, more than 17,000 people have sought refuge in Texas shelters and that number seemed certain to increase, the American Red Cross said.

Osteen announced the opening of his church in a tweet, saying he and wife Victoria Osteen “care deeply about our fellow Houstonians.”

RELATED: Is Hurricane Harvey a harbinger for Houston’s future?

After the mayor’s announcement, volunteers and donors lined up outside the Toyota Center, the downtown arena that is home to the Houston Rockets, in anticipation that it will be one of the new shelters. Details of the new shelters were expected soon.

The mayor said the city has asked the Federal Emergency Management Agency for more supplies, including cots and food, for additional 10,000 people, which he hopes to get no later than Wednesday.

Almost four days after the storm ravaged the Texas coastline as a Category 4 hurricane, authorities had confirmed only four deaths — including a woman killed Monday when heavy rains dislodged a large oak tree onto her trailer home in the small town of Porter. But unconfirmed reports of others missing or presumed dead were growing.

Six members of a family were feared dead after their van sank into Greens Bayou in East Houston. A Houston hotel said one of its employees disappeared while helping about 100 guests and workers evacuate the building.

Houston police confirmed that a 60-year-old officer drowned in his patrol car after he became trapped in high water while driving to work. Sgt. Steve Perez had been with the force for 34 years.

Authorities acknowledge that fatalities from Harvey could soar once the floodwaters start to recede from one of America’s most sprawling metropolitan centres.

The storm continued to take a toll even as the weather outlook improved slightly.

A pair of 70-year-old reservoir dams that protect downtown Houston and a levee in a suburban subdivision began overflowing Tuesday, adding to the rising floodwaters from Harvey that have crippled the area after five consecutive days of rain that set a new continental U.S. record for rainfall for a tropical system.

The rains in Cedar Bayou, near Mont Belvieu, Texas, reached 132 centimetres as of 3:30 p.m. CDT. That’s a record for both Texas and the continental United States, but it does not quite pass the 133 centimetres from Tropical Cyclone Hiki in Kauai, Hawaii, in 1950 (before Hawaii became a state).

The previous record was 48 inches set in 1978 in Medina, Texas, by Tropical Storm Amelia. A weather station southeast of Houston reported 49.32 inches of rain as of Tuesday morning.

Engineers began releasing water from the Addicks and Barker reservoirs Monday to ease the strain on the dams. But the releases were not enough to relieve the pressure after the relentless downpours, Army Corps of Engineers officials said. Both reservoirs are at record highs.

The release of the water means that more homes and streets will flood, and some homes will be inundated for up to a month, said Jeff Lindner of the Harris County Flood Control District.

Brazoria County authorities posted a message on Twitter warning that the levee at Columbia Lakes south of Houston had been breached and telling people to “GET OUT NOW!!” Brazoria County Judge Matt Sebesta said residents were warned that the levee would be overtopped at some point, and a mandatory evacuation order was given Sunday.

The levee was later fortified, but officials said they did not know how long the work would hold.

Officials in Houston were also keeping an eye on infrastructure such as bridges, roads and pipelines that are in the path of the floodwaters.

Water in the Houston Ship Channel, one of the nation’s busiest waterways, which serves the Port of Houston and Houston’s petrochemical complex, is at levels never seen before, said Jeff Linder, with the Harris County Flood Control District.

The San Jacinto River, which empties into the channel, has pipelines and roads and bridges not designed for the current deluge, Linder said, and the chance of infrastructure failures will increase the “longer we keep the water in place.”

Among the worries is debris coming down the river and crashing into structures and the possibility that pipelines in the riverbed will be scoured by swift currents.

In 1994, a pipeline ruptured on the river near Interstate 10 and caught fire.

Although forecasters had feared that another 2 feet could fall in some places, it appeared that the outlook had improved somewhat on Tuesday. The weather service said 2 to 3 more inches was expected to fall, perhaps a little less in Houston proper, as the storm moved east.

But southeastern Texas and southwestern Louisiana are still likely to see “relentless torrential rains,” with another 6 to 12 inches of rain across the upper Texas coast through Friday as Harvey moves slowly east over the Gulf of Mexico, the National Hurricane Center said.

It is expected to make landfall again Wednesday morning, probably in southwestern Louisiana.

The system could creep as far east as Mississippi by Thursday, meaning New Orleans, where Hurricane Katrina unleashed its full wrath in 2005, is in Harvey’s path. Foreboding images of Harvey lit up weather radar screens early Tuesday, the 12th anniversary of the day Katrina made landfall in Plaquemines Parish.

The disaster is unfolding on an epic scale, with the nation’s fourth-largest city mostly paralyzed by the storm that arrived as a Category 4 hurricane and then parked over the Gulf Coast. The Houston metro area covers about 25,900 square kilometres, an area slightly bigger than New Jersey.