Trump's crew wants to declare Mexico a safe third country. That could be a death sentence for refugees

Pacts like the one Canada has with the U.S. only work when there are protections for asylum seekers in the country they're being sent back to. That can't be said of Mexico. 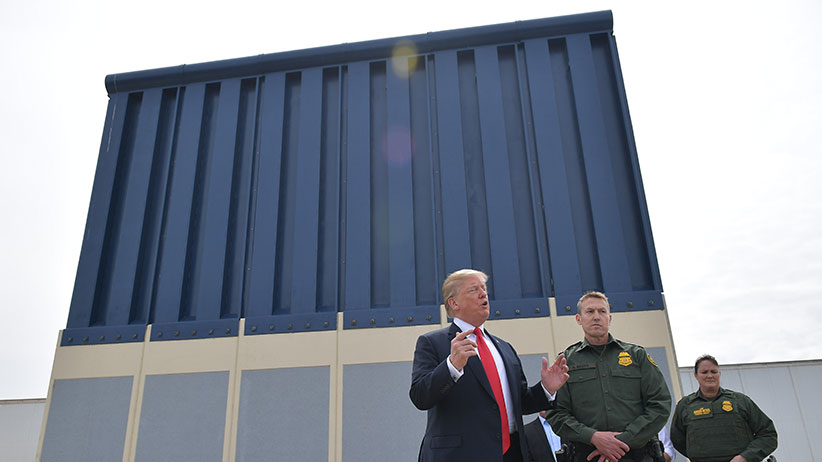 So Donald Trump has dispatched the mili National Guard to the U.S.-Mexico border to—well, it’s unclear what the president imagines the troops would do as hundreds of Central American migrants head north towards the boundary, most of them to seek asylum.

Does he envision the guards firing warning shots (or worse) as migrants approach American soil? Catching them and making them prisoners in some sort of imagined war on illegal immigration? Physically blocking people by forming a human wall of National Guard troops—a placeholder for the real wall of his presidential dreams?

In reality, removed from the fantasy reels playing in Trump’s brain, the National Guard will have a limited role. They can assist, provide surveillance, give medical aid and help process refugee claimants. The administrations of Barak Obama and George W. Bush sent National Guard personnel to reinforce border patrols, too; under Bush, the troops were unarmed, and Mexico says it’s been reassured that the Trump-deployed guards won’t have guns, either.

While this latest move is a largely useless (albeit menacing) gesture, it’s the back-end of the White House’s pronouncement that could have real consequences: Trump wants troops at the border until tougher border measures are in place. One of the most potentially sweeping reforms would draw inspiration from how Canada treats migrants who arrive at its southern border seeking refuge.

WATCH: What happens when asylum seekers cross the U.S.-Canada border

The Department of Homeland Security has been seeking to declare Mexico a “safe third country,” allowing authorities to turn back migrants from Honduras, Guatemala or other nations who have come up through Mexico to declare asylum at a U.S. border post. Canada and the U.S. have had a safe third country deal since early in the last decade, something Canada had long sought in order to achieve exactly what Trump now wants—a way to limit the number of people coming north. European countries have similar accords with each other to ensure a would-be refugee goes through the claim process in the first “safe” country she or he lands in, and have controversially worked out such a deal with Turkey,  a country many refugee advocates deem less than safe. Supporters call this a way to curb “asylum shopping.” Opponents call it refugee outsourcing.

Our Border Laws are very weak while those of Mexico & Canada are very strong. Congress must change these Obama era, and other, laws NOW! The Democrats stand in our way – they want people to pour into our country unchecked….CRIME! We will be taking strong action today.

Trump’s latest string of Twitter rants showed envy for Canadian and Mexican border laws. Another tweet even suggested tying Mexican border reforms to renegotiating the North American Free Trade Agreement (NAFTA). The Trump-aligned Center for Immigration Studies has echoed calls for a Canada-style safe country deal with Mexico, and on Trump-aligned Fox News, the group’s director of policy studies encouraged a link between Mexican trade and refugee policy. “It’s not their job to control our border, but we can make it in their interest to prevent things like this from happening,” Jessica Vaughan said. “We need to use that leverage, tie it into NAFTA if we have to, but we don’t need to just sit back and stand by while people take advantage of our lack of a secure border.” Canada’s safe third country accord was something it won as a concession from Washington during talks for post-9/11 security enhancements in 2002.

There are immigration advocates who dispute Canada’s assumption that the U.S. is a “safe” country to which it can return refugees. They cite shortcomings in its judicial or detention systems (or its politics). But Mexico is in a whole other category of danger. A report last year by Human Rights First chronicled mass slayings of migrants, along with disappearances, kidnappings, sex trafficking and shakedowns by “coyotes” offering safe passage. If passing through the country is perilous, being thrust back into Mexico and its refugee protection system isn’t much better. The country had no proper legal asylum system until 2011, and critics deem the current one inadequately resourced, overly reliant on detention and far more prone to return migrants to risky circumstances in their home countries than the systems of either of its North American neighbours. As such, it doesn’t warrant a safe third country agreement, says Richard A. Boswell, a professor at UC Hastings College of Law in San Francisco. “It only works where there is a clear, fair system that protects the genuine asylum seekers, because even Canada wouldn’t want to have an agreement where they became complicit with returning genuine refugees to their death. That’s why we don’t have agreements with any place else,” he says.

Past U.S. administrations, wary of the northward flow of migrants, have gotten Mexican authorities to crack down, Boswell notes: “They throw them back to Guatemala. They harass them along the way. They make life very miserable for them. They basically violate international law.” It’s not so much Mexico’s laws that Trump fancies; it’s the lawlessness.

Consider, too, the back-door provision that was heavily exploited during Canada’s influx of asylum seekers beginning last year: migrants are only returned to the U.S. if they arrive at a border post; if they cross at another part of the undefended boundary they bypass the safe third country agreement. Part of the rationale for that was practicality—Washington and Ottawa agreed that once someone arrives on domestic soil, it’s difficult to prove they had skirted a border line. This has encouraged people into “irregular” migration, and while there was one Canada-bound woman who died and another two men who lost their fingers crossing, the U.S.-Mexico frontier is well documented as a substantially greater hazard. This happens throughout the world of migrants and attempts to limit their travel: desperate to escape their they find riskier ways to permeating a border. “If the house is on fire and one window is boarded up, you’re going to jump out of another,” says Eleanor Acer of Human Rights First.

RELATED: The migrant surge on the border isn’t a crisis, it’s just a fiasco

Mexico has rebuffed the Trump White House’s past attempts to make its borders a turnaround point for asylum seekers, although Republicans in Congress have floated the possibility of somehow unilaterally declaring Mexico a safe third country. While the human rights defenders within Canada’s government ought to protest the United States treating Mexico’s refugee protection as safe, others in Ottawa might actually like this outsourcing solution. It would help out Canada’s asylum pressures, too, since many of the Haitian and African asylum seekers who arrive in this country make passage through Mexico on their way here. The Trudeau government has been looking for solutions to the challenge of northbound asylum seekers, but condoning this particular idea would be a grotesque way of accomplishing that for any country that respects international law and the principle of refugee protection.