Trump's immigration talk runs into reality at the Mexican border 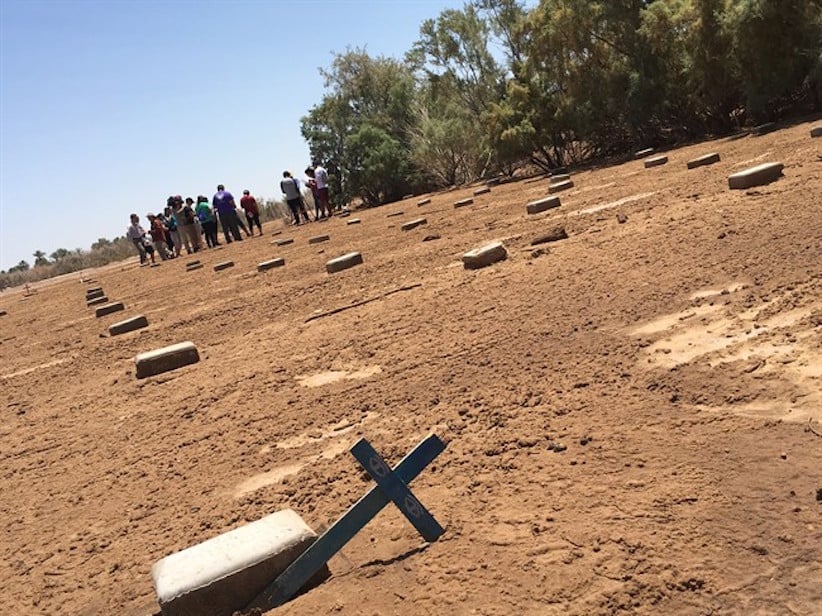 A group of people say a prayer, in Holtville, Ca., on May 31, 2016, in a cemetery filled with unmarked graves of migrants who died in the desert trying to cross into the United States from Mexico. (Alex Panetta/CP)

JACUMBA, Calif. – An American border guard steps out of his vehicle onto a dusty desert road, seeking to chat with the strangers he sees milling about the mesquite bushes a few metres from Mexico.

His team catches a dozen migrants crossing here illegally each day, he says. A few dozen others slip through, he figures. Evidence lies in the sand, in the discarded bits of cloth desert-walkers placed under their shoes to hide their footprints.

The conversation turns to Donald Trump. He’s asked whether Trump’s proposed border wall would halt the flow of migrants crossing through California’s Yuha Desert. He doubts it. There’s already a wall across almost one-third of the border — people still get over.

“You’d need to get rid of all the ladders in Mexico,” he says.

“If you build a bigger wall, they build bigger ladders… They’ve got fine engineers in Mexico, I have no doubt.”

Trump is now wrestling with difficult realities for his immigration plan. Some are political. His new attempt to soften his message for a general-election audience risks fracturing his own base, which was largely built on his immigration stance.

Some involve practical questions: Does Trump plan to cut off U.S. access to the Rio Grande? A wall already covers part of the border; the rest is mostly river. Does he actually intend to deport 11 million people in the U.S. illegally? If so, what’s the plan to prevent the collapse of industries that rely on migrant labour? And, if not, does that mean breaking his pledge against granting legal amnesty?

A sombre monument nearby belies the idea of simple solutions here.

A cemetery of unmarked graves is filled with people who perished crossing the border. Thousands have died — their numbers grew the last time politicians tried fixing the border, during the Clinton administration in the 1990s.

A partial wall went up in the populated areas near San Diego and Tijuana by the ocean, built from old scraps of metal that belonged to the military. As steel sheets and poles rose in the west, migration routes moved east, toward new threats: the desert, the river, and the human smugglers.

Enrique Morones leads a group praying in the cemetery. They’re volunteers with his organization Border Angels, which deposits jugs of water in the desert to keep people from dehydrating or roasting to death in the scorching desert sun.

“When we say, ‘I’m dying of thirst,’ it’s just an expression. For them it’s real,” says Morones, who used to work in marketing for baseball’s San Diego Padres before turning to full-time work as an activist and public speaker.

“Every summer there’s more deaths because of that wall than in the entire history of the Berlin Wall.”

Hugo Castro is among the volunteers dropping water. He usually works in the fields — numerous crops grow in the valley near the Holtville cemetery, including cantaloupe, lettuce, watermelon and cabbage.

He said many workers go back to Mexico at night because they can’t afford lodging in California. He said many make $40-$50 for a 10-hour day in the field, head south, wake up before 2 a.m., and return in the morning: “They cross daily.”

He said many workers have legal papers to cross — himself included.

The effect of undocumented labour extends all the way to Canada’s kitchen tables. Whether or not they’re aware of it, Canadians have a distant personal connection to the migrants who’ve become a major U.S. election issue.

In a literal sense, Canada eats the fruits of their labour. Dennis Nuxoll of the Western Growers farming association said of the 400,000 farm workers in California alone, the majority are believed to have falsified work documents.

They pick delicate crops that can’t be harvested by machine — especially grapes, tomatoes, strawberries and lettuce.

“If these workers disappeared tomorrow, we could not harvest many of the crops that Canadians consume,” Nuxoll said.

These workers are unnerved by the election.

The sound of a transistor radio crackles in the vineyards, in an elegant winery near Napa. The owner says staff have been listening to Spanish-language political radio lately, not music, while they work.

She admits she’s unsure whether they all have legitimate documents. There’s such a labour shortage in the area, she says, that she’s grateful for the workers she has: “I don’t know what we’d have to do if we had to hire.”

Trump’s immigration plan, meanwhile, is in flux. Where he once promised to deport all illegal migrants. he now says he would force them out — then allow an unspecified number back in, require them to pay back taxes, and grant legal status.

“I don’t want anything to do with him,” he said of Trump. “He represents the worst of the American spirit, and in my eyes he’s not welcome here.”