Image of the Week: That shadowy team of officers yanking people off the streets of Portland, Ore. is one more hallmark of the autocrat the U.S. president seems to wish he could be 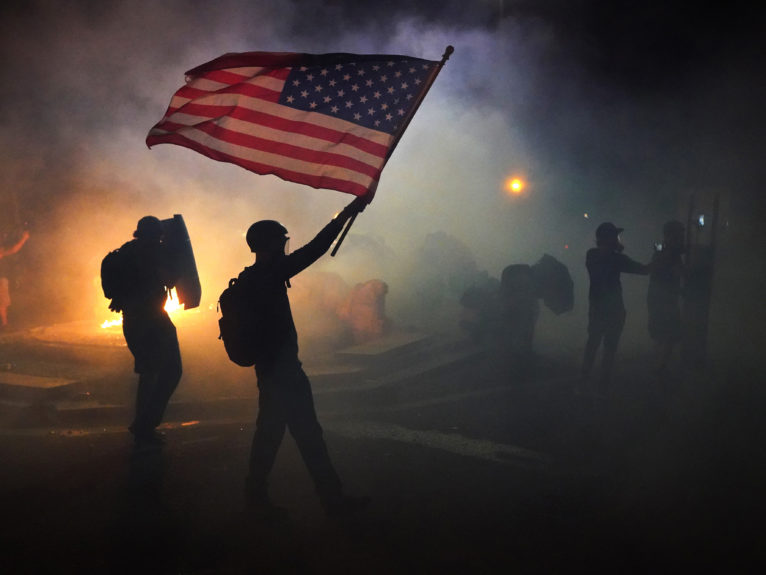 A protester amid tear gas fired by federal officers Tuesday during a protest in front of the Mark O. Hatfield Courthouse in Portland, Ore. (Nathan Howard/Getty Images)

News spread quickly when videos emerged of federal agents, dressed in heavy camouflage suits and face masks, began grabbing residents in Portland, Ore. and throwing them into unmarked civilian vehicles. These residents in many cases aren’t even protesters—one man was detained, presumably in error, simply because he was walking down the street wearing black. These somewhat mysterious federal agents belong to a new force created by President Donald Trump last month, signed in by executive order, ostensibly to protect historic statues and federal facilities. The reality is much more political. Trump has openly threatened to deploy them to any city run by “liberal Democrats”—starting with Portland and soon Chicago; possibly followed by Philadelphia, Detroit and Baltimore—against municipal and state governments’ wishes in virtually all cases. The extreme and violent reaction to the nationwide protests, which have been recurring since the death of George Floyd in May, has sent a clear signal to all Americans. To his dwindling number of supporters, Trump is officially the “president of law and order,” as he put it last month. To everyone else, he is one step closer to a true tyrant.