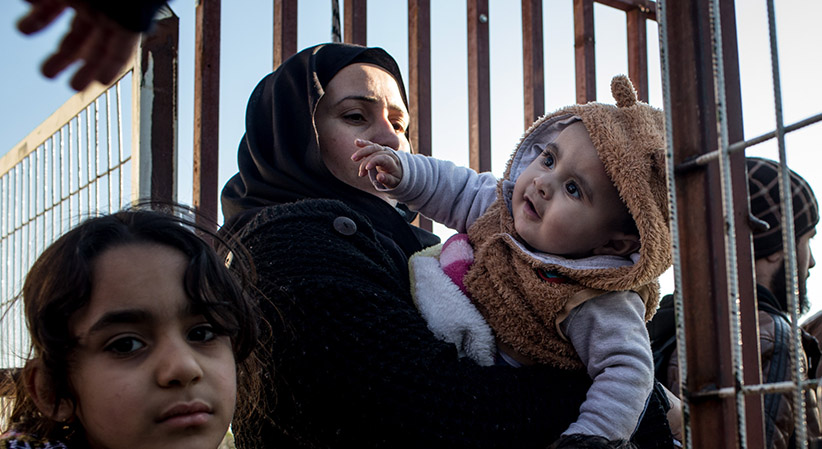 A woman wanting to leave Turkey carries her child through the border gate as a small number of Syrian refugees were allowed to return to Syria at the closed Turkish border gate on February 8, 2016 in Kilis, Turkey. (Chris McGrath/Getty Images)

Muhammad al Ahmed can recount the exact moment he felt freed from the grip of the Syrian civil war. It was the early morning of Jan. 30, and he had taken his tentative first steps out of his family home in a middle-class suburb of Damascus. Ahead lay the dangerous journey on the refugee trail to Europe, behind the ruin of unyielding conflict. “I had no idea where my life would lead me,” says the 25-year-old electrician, slumped over a steaming cup of black tea in an Istanbul café. “I knew I would have to start from zero, in a strange place where I don’t speak the language. But nothing could be as bad as Syria.”

Ahmed’s is a familiar story. Intense bombardments in recent weeks by Russian forces in Syria’s northern Aleppo province as well as Turkish attacks on advancing Kurds along Turkey’s border with Syria have generated a new wave of refugees. Tens of thousands of civilians have fled Aleppo and its surrounding countryside and now find themselves stranded in hastily constructed camps in Azaz, a small town near the Turkish border. Officials in Turkey, arguing that their country has reached its limits with the estimated 2.5 million Syrian refugees already residing there, have refused to let them cross the border. They are calling instead for a safe zone to be established in Azaz.

This latest chapter in the refugee crisis comes at an especially critical time. Late last year, Turkish and European officials reached an agreement in which Turkey would receive $4.6 billion over two years in exchange for slowing down the flow of asylum seekers crossing illegally into Europe. How Turkey would accomplish the task was left up to its own leaders, with some vague European demands to increase work permits, tighten the borders and tackle smuggling networks.

Critics assert that the EU is trying to buy its way out of the refugee crisis. “Europe is simplifying this into a money issue,” says Lami Bertan Tokuzlu, an assistant professor of law at Istanbul’s Bilgi University and an expert on Turkey’s migration policy. “It’s much more than this.” Tokuzlu says that both Europe and Turkey are operating in a dangerous legal grey zone. The deal, for instance, includes the finalization of a new readmission agreement between Turkey and the EU, which would simplify forced deportations from Europe back to Turkey.

Turkey’s security forces have, meanwhile, begun systematically targeting alleged smuggling networks and harassing refugees who are caught trying to illegally reach Europe. Amnesty International noted in a report in December that, by late autumn, Turkish officials in camps near the Syrian border had already begun using the threat of forced returns as a way to coerce refugees into abandoning plans to leave Turkey illegally.

Winter is usually a slow season for Turkey’s smuggling industry. Rough seas and cold temperatures deter many prospective travellers from taking the risk. Some, however, are attracted by the drop in prices—down to US$600 per person from the US$1,500 or so smugglers were charging over the summer. Others worry that Turkey’s deal with Europe will lead to even higher prices and less guarantee of success. It’s time, say many refugees, to leave.

On Feb. 3, the day leaders from all 28 European Union nations officially signed off on the deal, a police dragnet in Istanbul netted what Turkish authorities described as eight human smugglers, along with more than a thousand foreign passports.

The timing of the raids raised some eyebrows. For the Syrians gathering at the Turkish border, the message was stark: if you enter Turkey, you will remain in Turkey. For European leaders, it was intended to show Turkey’s resolve in meeting its commitment to the deal. But for many migration experts, it was little more than theatre.

“Smuggling in Turkey is no simple matter,” says Ahmet Içduygu, director of the Migration Research Program at Istanbul’s Koç University. “My research shows that current smuggling operations have evolved beyond the established mafia groups and criminal networks, which have run human smuggling in Turkey for decades. Large informal networks have emerged and they are much more difficult to eliminate.”

Recent refugee arrivals in Istanbul support Içduygu’s findings. They describe flights across the border that increasingly rely on locals, often people with experience in smuggling goods, who have only recently expanded into human smuggling. Ahmed says he was brought over by cigarette smugglers while others have said they accompanied weapons smugglers linked to the outlawed Kurdistan Workers’ Party, which is fighting a bloody civil war with Turkish forces in Turkey’s southeast.

Turkey’s refusal to open the border to the refugees massed in Azaz will only prompt asylum seekers to attempt these more dangerous routes, human rights organizations warn. Turkish President Reçep Tayyip Erdogan has countered that Turkey cannot accommodate any more refugees. If more come, he warned ominously on Feb. 11, Turkey will have no choice but to allow them to move on to Europe.

The threat has powerful political overtones. Turkey’s approach to the refugee crisis has always been about political leverage over Europe, argues Tokuzlu. In closed-door discussions he has attended with officials from the national migration directorate, he says the Turkish government appears more interested in using refugees to advance negotiations over Turkey’s accession to the EU, for instance, than they are in genuinely helping Syrian refugees. “Erdogan’s threat to send more refugees to Europe, a threat he made when he was first negotiating the deal back in November, is part of this leveraging,” he says.

Experts like Tokuzlu and Içduygu argue that the deal is doomed to failure precisely because it does not genuinely address the needs of asylum seekers. Içduygu points out that there is nothing in the deal which, for instance, requires Turkey to make changes to its laws that make settling in Turkey nearly impossible for refugees. “If you are a foreigner, you will never feel like you have a future here,” he says.

“I’m making plans to leave as soon as possible,” says Hussein al Ali, a 21-year-old sports equipment technician from Damascus, now living in Turkey. “I’m not the only one; every Syrian I know wants to leave. There is a fear that the door to Europe will close and we will not be able to leave Turkey.”

When Ali first arrived in Istanbul in 2012, he had no intention of staying. His plan was to see what kind of city Istanbul was and then go home to Damascus. He only decided to stay after the situation in Syria deteriorated and he, like Ahmed, feared returning would mean conscription into the regime’s army and death at the frontlines. Since then, he has worked hard to build a life for himself in Istanbul—though the effort, he says, feels pointless.

“Things are good for me here,” he says in fluent Turkish. “I have a decent job and I love this city. But I’m working here without any insurance, no legal work permit or any status. I can lose my job at any time, so I can’t plan for the future. Syria is finished for me. I have to look forward, to a place that offers me a chance at a new life. Turkey is not that place, unfortunately.”

Improvements to the work-permit regime, part of Turkey’s agreement with the EU, offer little consolation, Ali adds. Turkish employers benefit from hiring illegal workers because they then avoid paying the insurance and taxes associated with legal employees, he says. “Why would they hire a Syrian with a work permit when they can hire one without one and save money? Besides, having a temporary work permit is not the same as citizenship.”

Nor does it appear the agreement, along with Turkey’s apparent crackdown on smuggling, is having any real effect on the refugee flow. According to figures released by the International Organization for Migration, more than 76,000 asylum seekers arrived on Europe’s shores over the first six weeks of 2016, the vast majority of them landing in Greece from Turkey. While far fewer than the masses arriving at the height of the crisis last summer, the numbers represent more than a tenfold increase over the same period in 2015.

“I’m going to miss Istanbul,” says Ali, who is planning his escape. “If you have money, this is a great place to live. But after four years here, I feel stuck. After four years in Germany, I could have a passport. I could move forward with my life.”

Ahmed is less sentimental about leaving. Even after two brief weeks in Istanbul he says he has had enough of the city. “I worked for a week in construction but never got paid,” he says. “The working conditions were terrible and they made you work from eight in the morning until eight at night. I don’t mind hard work but it should lead to something. In Turkey, hard work for Syrians only leads to more misery.”