Turkey: Enemy inside the gates

While it stands with the anti-Islamic State coalition, Turkey’s real threat is already inside its borders 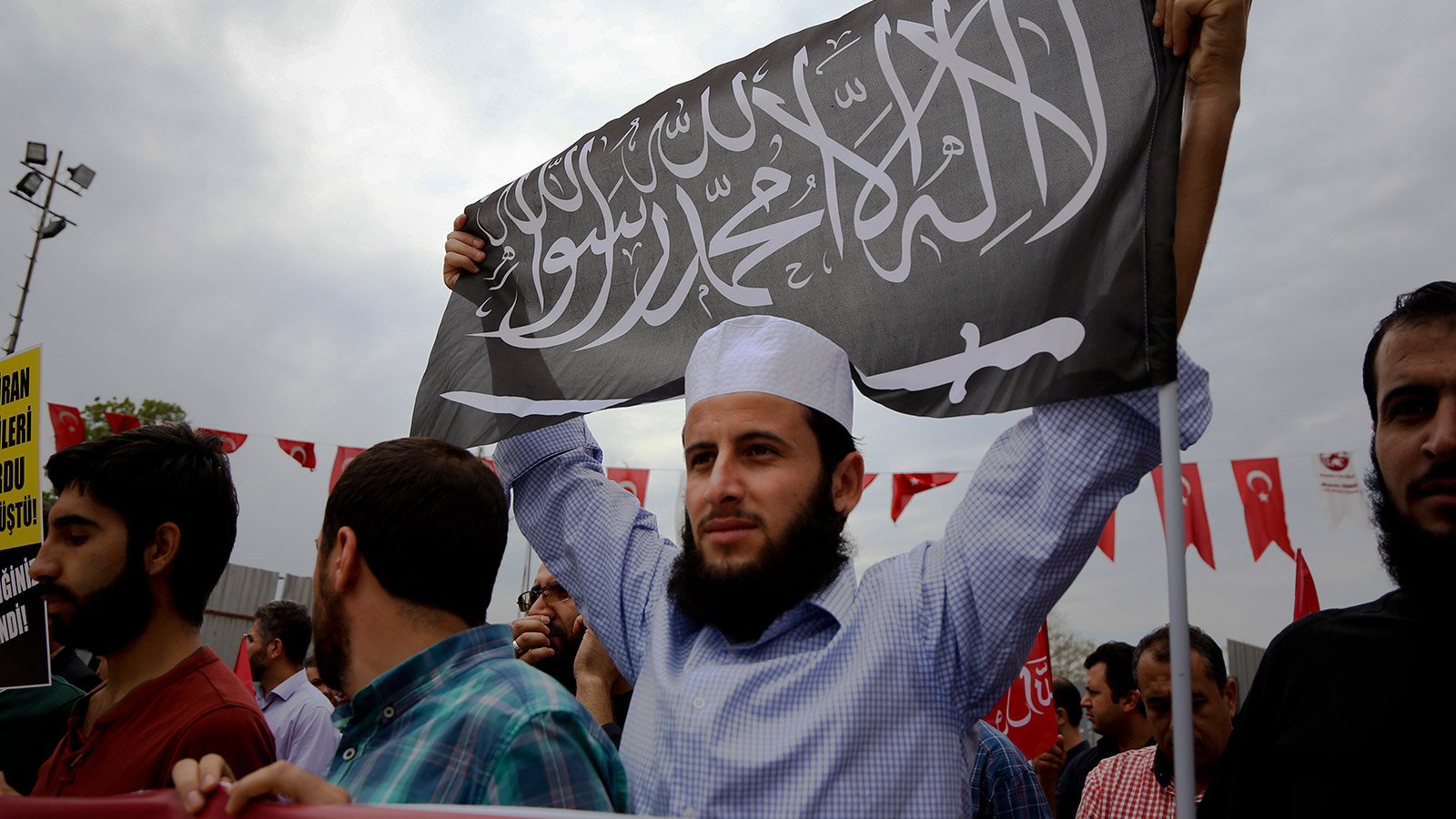 When Merve Ozdemir walks the streets in Kemerburgaz, a suburb in Istanbul’s northwest, she wears a niqab, the all-encompassing veil that leaves only her eyes visible. She is usually the only one in that attire. Kemerburgaz is one of Istanbul’s more secular neighbourhoods, its residents of mostly Greek and Bulgarian descent, a place where even a headscarf is a rarity. “I’ve been asked if I’m from Syria,” says the 23-year-old wife and mother. “People stop me and demand to see my face because they think I am an outsider, even though I’ve lived here all my life.”

Ozdemir is a devout Muslim but her husband drinks alcohol. Her brother is a drug addict, her uncle an alcoholic, as was her grandfather. “It’s what caused my father to embrace Islam,” she says, her words tumbling out fervently. “He saw what the secular world was like and he rejected it. I grew up in a religious house but religion was never forced on me. I saw for myself the sins people committed, even those who called themselves Muslims. I hated it. So I covered myself and devoted my life to God.”

That was when she was 15. Like many girls in her poor neighbourhood, Ozdemir had dropped out of school when she was 12. She says she tried to study the Quran at that age but found the lessons from official government teachers lacking in the fervency she felt. “I learned myself how Muslims have been persecuted by the Crusaders and the Jews.”

Last year, Ozdemir’s world changed. For three years, a war had been playing out in Syria. She had followed it closely, particularly the growth of radical Islamist groups that claimed to be fighting for the sake of Islam. As Islamic State (known at the time as ISIS) swept through northern Syria and Iraq with ease, Ozdemir was convinced the group had to be divinely guided. When it declared a caliphate, calling itself Islamic State, it was for her the fulfillment of a dream. “I’m following what Islamic State is doing in Syria,” she says. “I’m following Islamic State fighters on Twitter. If I could go there and join them, I would.”

Her story is in many ways typical of a growing number of Turks who have discovered a new-found purpose with the rise of Islamic State. While Turkey has emerged on the world stage as a Muslim-majority nation where Islam and secularism live side-by-side in democratic equilibrium, the reality is much different. For decades Turkey has tried to reconcile its official secularism with a deeply rooted Islamic identity. Secularists ruled the country for much of its 90 years of republican history, pushing religion, and those who follow it, to the margins. More recently, however, an Islamist-rooted elite has taken the levers of power, inflicting the same sort of marginalization on the secularists that they themselves once suffered.

Now, Islamic State has upped the ante on Turkey’s struggle between secularism and Islam. On Oct. 2, after weeks of hesitation, the Turkish parliament voted overwhelmingly to join the U.S.-led coalition to wipe out the upstart movement. But while Turkey gears up to fight Islamic State militants now edging ever closer to its border, it faces an even bigger fight at home.

As many as 3,000 Turks have joined Islamic State. Some estimate that as many as 11 per cent of Turks support the group, amounting to around eight million people. Hugh Pope, deputy director of the Europe and Central Asia program at the International Crisis group, has noted that “internal government polling showed more sympathy for Islamic State in the Sunni constituency of the ruling Justice and Development Party [AKP].”

Turkey is facing a crisis that many analysts believe is of its own making. Finally deciding to confront the Islamic State was inevitable: the presence of such a destabilizing force on its borders has threatened much of the government’s regional and domestic agenda, including a peace process with its Kurds and maintaining good relations with Western nations.

The repercussions, however, could be severe, considering the increasingly volatile environment in Turkey. Mahmud Erol Kilic, a scholar of Sufism, Islam’s mystical branch, and current secretary general of the Parliamentary Union of the Organization of the Islamic Conference member states, believes the Turkish government’s policies toward Syria have created an environment in which radical Muslims feel empowered. “I wouldn’t call the AKP radicals,” he says, “but there are radical traits inside the AKP; there are radical trends. Turkey has always had conservatives among its population but now they have a war they can call their own, and it is close to Turkey. They are adventurists. They want to fight. The Turkish government, not by design but as a consequence of its policies, has strengthened these people.”

Indeed, for the past three years, Turkish authorities have turned a blind eye to the flood of foreign fighters entering its territory, en route to Syria. Its major cities have become a free-for-all for an eclectic mix of radicals and revenge seekers, all vying for a chance to get in on the action. They have come and they have gone, supported by the vast networks of Syrians among the 1.5 million refugees who have made Turkey their home.

Major clashes have broken out in recent days between anti-Islamic State Kurds, conservative Muslims and police in Istanbul and other cities in Turkey’s southeast, where Kurds are a majority. The Kurds blame the AKP for not doing enough to protect their Syrian brethren currently under siege by Islamic State militants. Protests in Istanbul are growing as Kurds vent their anger in increasing numbers, prompting authorities to reply with water cannons and riot police.

Pro-Islamic State demonstrators have also taken to the streets in Istanbul’s conservative Fatih district, condemning the U.S.-led bombing campaign in Syria and Iraq and warning that if Turkey joined the ﬁght, there would be consequences.

“Islamic State is a natural reaction to the U.S.-led war against Islam,” one 20-year-old demonstrator tells Maclean’s in Fatih, referring to himself only as “Muslim X”. “The stories of massacres in Syria and Iraq are all propaganda. The Islamic State is a product of U.S. action and if attacks against it continue, there will be an Islamic State in New York, in London, in Istanbul.”

In Ankara, the Turkish capital, the AKP leadership appears to be waking up to the dangers it faces. This week, Islamic State fighters raised flags inside the city of Kobane on the Turkish-Syrian border. Turkey has vowed not to let the town fall to militants, and on Tuesday U.S.-led coalition air strikes hit Islamic State positions there. In recent weeks, particularly after 49 Turkish hostages held by Islamic State were released on Sept. 20, President Recep Tayyip Erdogan has adopted a more stern tone toward the group. “We will fight effectively against both Islamic State and all other terrorist organizations within the region,” he said during his speech at the opening of the Oct. 1 Turkish parliamentary session. “This will always be our priority.”

But is it too little, too late? Some religious leaders remain hopeful that Turkey will avoid the kinds of religiously motivated conflicts engulfing its neighbours. “During the Iranian revolution, Turkey’s conservatives were also happy,” says one government-appointed imam in Istanbul’s Uskudar district, requesting anonymity because he is not authorized to talk to the media. “They advocated for a similar revolution here. But that passed; this will also pass.”

The difference, however, is that back then, Turkey was ruled by a staunchly secular elite, headed by the Republican Peoples’ Party (CHP), and backed by a military that had little patience for Islamists. Since 2002, it has been ruled by a cadre of religious conservatives, the AKP, who have spent the past decade empowering their supporters. From the secularist perspective, the AKP’s influence on Turkish society borders on treasonous. “Their 13 years of governance is demolishing a 90-year-old republic,” says Ihsan Ozkes, head of the CHP in Uskudar.

Okzes has been tracking the AKP’s Syria policy for the past three years and has a stack of documents that he claims links the AKP, the Turkish intelligence services (MIT) and some Turkish relief agencies to radical groups inside Syria. Ozkes believes that Turkish intelligence is now deeply intertwined with radical groups inside Syria, and has facilitated the movement of people of across the border. Most analysts agree that Turkey has been following a policy of using Islamist groups as proxies against the Syrian regime. The release of the 49 high-value Turkish hostages in what has been reported as a prisoner exchange is indicative, claims Ozkes, of the extent to which the MIT has made inroads with Islamic State. (Turkish government officials did not reply to requests for comment.)

In a telling moment on Oct. 2, U.S. Vice President Joe Biden told an audience at the Harvard Kennedy School of Governance that Erdogan had admitted that American officials “were right” in warning that Turkey had “let too many people” into Syria. Erdogan was furious, prompting Biden to apologize the next day “for any implication that Turkey or other allies and partners in the region had intentionally supplied or facilitated the growth of ISIL,” the acronym used by the White House for Islamic State. What Biden did not retract was his public admission that Erdogan had acknowledged a mistake.

If Turkey is indeed supporting Islamist groups ﬁghting in Syria, it is a dangerous game: Pakistan tried a similar strategy in Afghanistan and Kashmir and has witnessed its own society spiral from relative moderation into an era of sectarian hatred and religious extremism—not to mention having created a lawless border zone. Turkey, Ozkes says, has not gone that far yet. “We have some advantages over Pakistan,” he says. “Our history of governance, our closeness to Europe; I doubt we will go down that same road.”

Even so, the damage done to Turkish society will take a long time to ﬁx, he says. Religious conservatives like Ozdemir are convinced their time has come. Turkey’s moderate Suﬁs, meanwhile, remain marginalized. “It is still illegal to call oneself a Sufi master in Turkey,” says Kilic, the scholar. “Anything that is not part of the official Islam is prohibited.”

Islam in Turkey, both Ozkes and Kilic agree, has become increasingly rigid and conservative and now permeates much of Turkey’s ruling elite who depend on it for their support base. “Consequently, Erdogan can never be a strong supporter of the anti-Islamic State coalition,” says Ozkes. “Too many of his supporters are religious conservatives who are against the U.S. He now has to walk a fine line between maintaining good relations with Western countries and keeping his electoral base happy. It’s an impossible task.”