Turkey is losing where it counts 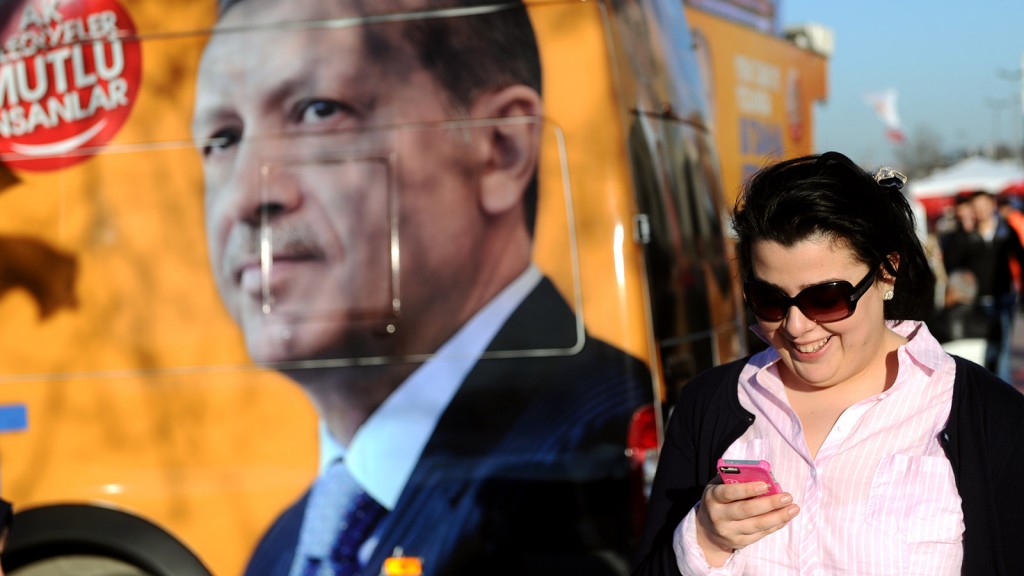 Over the past three months, dozens of taped telephone conversations between senior members of Turkey’s ruling Justice and Development Party (AKP) have dominated headlines. The revelations range from millions of dollars in bribes paid by foreign businessmen, to what appears to be one politician soliciting the services of a prostitute to, most recently, a senior adviser to Turkish Prime Minister Recep Tayyip Erdogan poking fun at the Quran. Call it the Turkish version of WikiLeaks. All this from a party that has fashioned itself as a model of religious ethics and morality.

As this latest drama unfolds, Turks are preparing to go to the polls for municipal elections on March 30 that many consider a litmus test of AKP support. Erdogan, with his usual bravado, has called the taped conversations—or at least the most damaging ones— forgeries, and blocked Twitter and Facebook in Turkey last week.

Turks, on the other hand, are having a blast. Smartphones are chattering away with the latest releases; young Turks, who only a few days earlier were being pummelled by water cannons and rubber bullets in ongoing street protests against the AKP’s increasingly authoritarian governing style, have taken to gathering at private homes, cracking open a few beers and listening to what appears to be the implosion of their enemy. They howl when Erdogan’s son, Bilal, is apparently heard telling his father that he has removed all of the money hidden in the family home, as instructed—but when pressed explains there is still about $1 million left. His father tells him to hide that money, too.

“This is just amazing,” says Tuncay Karatas, a lawyer and political activist. “Do we need to do this fighting on the street anymore? Erdogan is digging his own grave.”

Or is he? Turkey is no stranger to political scandals. In early 2011, leaked spy-cam videos of politicians with the nationalist-leaning MHP made the Internet rounds. They showed senior party members in the company of young, beautiful women. It was election season, prompting accusations of below-the-belt political tactics. The usual suspects were accused: Islamists from the AKP or followers of Fethullah Gulen, who leads a rival Islamic movement, though no evidence was ever produced to link them to the scandal. Regardless, the tactic failed. The MHP fared as well in the election as they were expected to, surpassing the 10 per cent vote threshold required by Turkish law for parties to secure representation in the parliament.

Polls suggest the impact of the current scandal will be minimal, too. An analysis of opinion polls over the past six months compiled by Ali Çarkoglu, a professor of political science at Koç University in Istanbul, indicates AKP support has remained relatively stable.

Its resilience is part of a disturbing trend emerging in this part of the world: young liberal movements appear unable to convert the energy of street protests into ballot-box successes. Turkey looks set to follow the lead of Egypt and Tunisia: their youth, so successful at resistance and confrontation, have failed at political mobilization. “It just feels like we’re protesting for the sake of protesting now. We stopped the AKP from destroying Gezi Park but they’ve gone ahead with other megaprojects,” says 42-year-old activist Tolga Baysal, referring to the AKP’s plans last year to uproot one of Istanbul’s last green spaces and replace it with a military barracks and a mosque. “These phone scandals show just how corrupt they are but still we don’t know what to do. Who do we vote for in the next election?”

The options are slim. After nearly a year of demanding political change, Turkey’s protest movement has managed little in terms of political organization. One party, the Gezi Party, has emerged but remains largely disconnected from the bulk of youth voters and appears destined to fade away in the face of the much more powerful electioneering machine run by the AKP. “It’s strange,” says Ezgi Icoz, a 35-year-old art therapist and political activist. “People go out and protest for a few days and then they stop. They go on with their lives while this election campaign plays out around them, with all the same politicians we’ve seen for years. It all feels too familiar. It all feels very surreal.”

The liberal youth in Egypt spoke along similar lines following the military coup that brought down the democratically elected Muslim Brotherhood government. “We just can’t believe this is happening,” one activist said in August last year. “We didn’t want the Muslim Brotherhood in power but we also didn’t want this military intervention. We feel like we’ve lost control of what we started.”

Indeed, control, in Cairo as well as Ankara, remains firmly in the hands of an old guard of politicians. How they maintain their grip varies: in Egypt, military authorities have resorted to fear tactics, warning of the threat of Islamic militancy to justify their actions.  In Turkey, it’s the economy. Despite the ongoing turmoil, Turkey’s economic indicators remain strong.  Growth rates are robust and unemployment relatively low. Çarkoglu suggests that Turks, who have suffered through severe economic crises in the past, will be more forgiving of political corruption and authoritarianism as long as the economy chugs along. Though Erdogan and his crew should not feel too secure, he adds. “The political preferences of younger voters are of utmost importance,” he says. “Before the Gezi Park protests, the AKP was dominant among the younger voters as well, but that influence has now been called into question.”

Playing in the AKP’s favour is a general apathy toward elections among Turkey’s youth. Voter turnout has never been high for their generation. Will it be different this time?  “We’ll have to do something,” says Baysal, the activist. “These scandals may be fun to watch but if we don’t act, we’ll never get these corrupt people out of power. And then all of this, everything we’ve done, all the sacrifices and the spilled blood, will be for nothing.”