Turkey is the new 'sick man' of Europe

Well before the people of Turkey went to the polls on Sunday for a national referendum about constitutional changes to the political system—changes that would concentrate power in the hands of the president—the process of political change was set in motion. In some sense, the referendum result had been pre-ordained since the July 2016 military coup. President Recep Tayyip Erdogan’s characterization of the coup as a “gift from God” was ultimately realized with Sunday’s victory of the ‘Yes’ side, albeit by a slim margin of 51.4 per cent to 48.6 per cent. Throughout the campaign, Erdogan cited the 2016 coup as the main reason why new and stronger executive powers are necessary to thwart regime instability and a host of other ills.

With the help of the minority nationalist party, Erdogan appears to have carried the day, despite claims of ballot box tampering, unstamped ballots and an unfair playing field. Electoral observers from the Organization for Security and Co-operation in Europe, as well as opposition activists, point to the unfair advantage the ‘Yes’ side had in being able to call on all the resources of the state to secure the referendum victory. The main opposition party CHP, and the Kurds, are crying foul, having voted massively for ‘No’.

READ MORE: The death of democracy in Turkey

Seasoned political observers of Turkey are all too familiar with the polarization of Turkish society between pro- and anti-Erdogan factions, which is mirrored by serious differences over the implementation of conservative Islamist measures and their effect on Turkey’s legacy of secularism. The results are not surprisingly close; they illustrate the continuing polarization of Turkish society and politics, a fact which is not going to disappear simply because President Erdogan requires it to be so. In his characteristically strident victory speech, there was no olive branch for the opposition, only veiled threats insisting that Turks must accept the result and come to terms with it. Erdogan summarily dismissed charges made by the opposition and OSCE European observers of electoral irregularities.

In terms of government mechanics, the changes are far-reaching. They will substantially strengthen and concentrate power in the hands of the president, making Erdogan the official head of state in addition to bestowing upon him the mantle of head of the ruling political party in Parliament. Unlike the American system of government, the new Turkey would see a partisan president in control of both the executive and legislative branches. Parliament loses its Office of the Prime Minister as well as control over budgets and appointments. The president will also have the power to dissolve Parliament. This ensures the predominance of presidential power over the party system. The head of the executive branch is able to make the majority of judicial appointments, and it is very difficult indeed to see how the judiciary could overrule the executive authority and enforce its decisions in any given situation. For all these reasons, the new brand of constitutional republic proposed in the referendum does not reflect the separation of powers enshrined, for example, in the American constitution.

RELATED: Why terrorists are attacking Turkey

Political science is, however, an inexact science since political changes never take place in a vacuum—and Turkey is no exception. Often, the historical political culture can dictate the manner in which institutional changes occur. In Turkey’s case, the issue has been compounded by a number of internal factors, not the least of which was the heavy-handed reaction to the 2016 coup and the pogrom against alleged political opposition to Erdogan. The coup simply accelerated the executive control over the judiciary and the media, both of whose independence had been severely limited long before the coup. 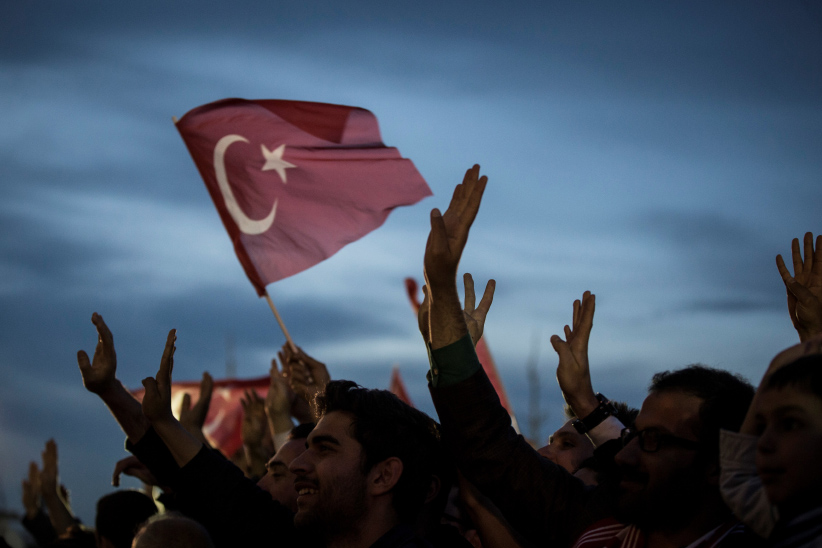 The crowd, who are celebrating the results of the referendum, listen to Turkish President Recep Tayyip Erdogan (not seen) at the Presidential Complex in Ankara, Turkey on April 17, 2017. (Binnur Ege Gurun/Anadolu Agency/Getty Images)

Few would question the salutary effect that the election of the Justice and Welfare Party (AK Party) had on Turkish democracy at the turn of this century. It was a breath of fresh air, a departure from the hegemony of military power and its interference in politics. It took additional effort from Turkish society, including the judiciary branch, to extirpate the role of the military and place it under legitimate legislative and executive surveillance.

Unfortunately, as time passed, the AK Party began to dismantle other attributes of the Ataturk secular legacy with gradual Islamization measures. Under the cloak of conservative religious sentiment, these measures were meant to marginalize the secular legacy of Ataturk, and the opposition parties inspired by it, in order to ensure the political longevity of the AK Party and the maintenance of its electoral clientele. The head scarf controversy is a good example of how the AK Party, under the watchful guise of first prime minister and now President Erdogan, forged an electoral base of Turkish nationalists and soft Islamists. Kurds, Alevis, secularists, leftists and now Gulenists are not included in its base. Some AK Party intellectuals even began to talk of a new brand of neo-Ottomanism including a new more active role for Turkey in the Middle East and Africa. One thinks of former foreign minister and ex-prime minister Davutoglu, and the active role Turkey has taken in the Syrian conflict welcoming refugees and supporting the opposition forces against Bashar al-Assad’s regime. The authoritarian arrogance and inflexibility demonstrated by Erdogan ultimately signalled the fall of Davutoglu, perhaps a harbinger of what executive fiat may become more often now that the referendum has been approved.

If the referendum result stands, it will assist in creating a Turkish state with several things in common with its Ottoman parent at the turn of the 20th century. First, it will create an executive authority not based on any democratic separation of powers and resembling more the traditional absolutist role of the Pasha. Second, the reliance on Islamism to govern is manifest and growing. The reign of the AK Party is directly proportional to that growth. What we saw during last summer’s coup d’état was a fight, partly manufactured, between former AK Party loyalists and party builders (the Gulenists) and those in the AK Party seeking to monopolize and play the Islamist card for domestic political gain. During the referendum campaign itself, Erdogan made little effort to calm the waters when European politicians began to question the arrival of Turkish ministers on their territory seeking to campaign for the ‘Yes’ side. Picking a fight with non-Muslim Europe was part of Erdogan’s referendum strategy to capture Turkish diaspora votes by playing on their alienation. It worked. Most of the Turkish diaspora in Europe voted heavily in favour of the ‘Yes’ side.

Throughout this development since 2002, we have noticed a sharp decline in the freedom of the press in Turkey. Jailing journalists only highlights the problems associated with holding a free and fair referendum on changes to the Turkish constitution in 2017. Without a free and independent press to act as oversight on executive authority, a ‘Yes’ vote on April 16 is fraught with danger.

It remains to be seen how Turkey can fully scuttle the historical legacy of Mustapha Kemal. Forced secularism, a highlight of Ataturk’s policies, is never a good option, and is made to seem worse when the issue is deliberately obscured by reference to a woman’s right to choose (head scarf controversy) and subsumed under the category of fallaciously defending individual rights. How is this different from forced Islamization and elimination of dissent by executive fiat? Although one can understand Turkey’s frustration with nonnegotiable conditions laid down by non-Muslim states for admission to the European Union, thumbing their noses at Europe is not a particularly wise policy given Turkey’s reliance on trade with the West and workers’ remittances. The massive arrests and witch hunt for Gulenists (supporters of Fetullah Gulen used to be AK Party loyalists), journalists, judges, teachers and other professionals is proof enough that the referendum result was almost a forgone conclusion, having created an unfair playing field. Using Islam as a smoke screen for augmenting his own political power is illegitimate and challenges the secular nature of the state and its institutions.

In short, the ‘Yes’ victory will likely not bring peace with the Kurds. The unreported war on the Kurds in eastern Turkey will continue with its daily tribute of innocent lives and reprisals by the PKK—the former unreported in the absence of any independent journalists. The referendum result will not preserve Turkey from terrorism. It will not help build any bridges between the ruling party and the almost 50 per cent of citizens who voted ‘No’. Calls for the death penalty can now be heard from ‘Yes’-side supporters who wish to continue to avenge their leader’s fateful day in the coup last July. If political stability can be defined with an iron fist, with more police in the streets, then one can suppose that Erdogan is the victor.

Bruce Mabley is a former Canadian diplomat in Turkey and currently Director of the Mackenzie-Papineau Group in Montreal.