Turkey's Erdogan to call a new election for Nov. 1 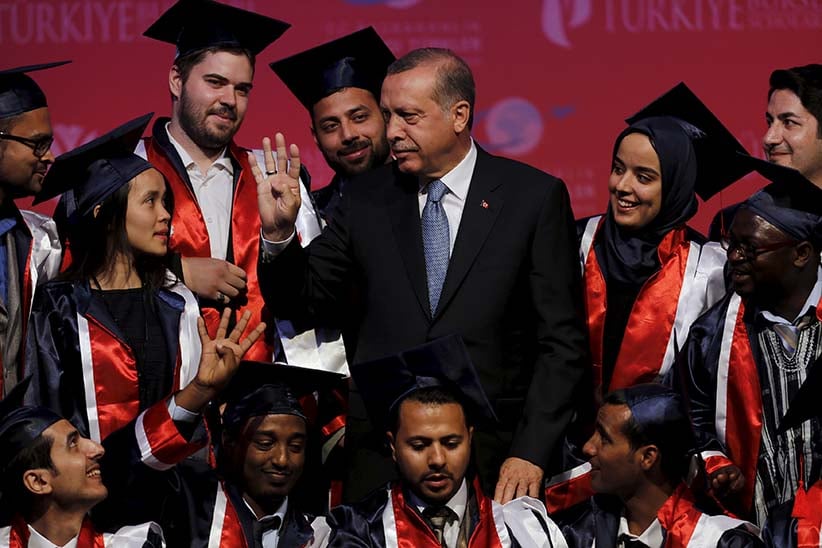 Turkey’s President Tayyip Erdogan chats with students during a graduation ceremony in Ankara, Turkey, June 11, 2015. President Erdogan on Thursday urged the country’s political parties to work quickly to form a new government, saying egos should be left aside and that history would judge anyone who left Turkey in limbo. In his first public appearance since Sunday’s parliamentary election, Erdogan said no political development should be allowed to threaten Turkey’s gains. He said he would do his part in finding a solution with the powers given to him by the constitution. (Umit Bektas/Reuters)

ANKARA, Turkey _ Turkish President Recep Tayyip Erdogan said Friday he will call a new election for Nov. 1 after the legal period for forming a new government ends this week.

The widely-expected announcement comes days after Prime Minister Ahmet Davutoglu abandoned efforts to build a coalition government, following the failure of talks with the leaders of two smaller parties.

Erdogan told reporters he had no intention of giving Turkey’s opposition leader the mandate to try to form a government. He said he would hold talks with the parliament speaker after the 45-day legal period for forming a government ends Sunday.

“After that, we will take our country to early elections,” Erdogan said. “God willing, on Nov. 1, Turkey will go through what I like to call repeat elections.”

The Turkish leader also said he would form an interim government to lead the country to the election.

Erdogan reportedly favours a new election over a coalition government in the hope that the ruling party that he founded can regain the majority it lost in the June election.