'It is correct that there was an attempt,' says PM Binali Yildirim 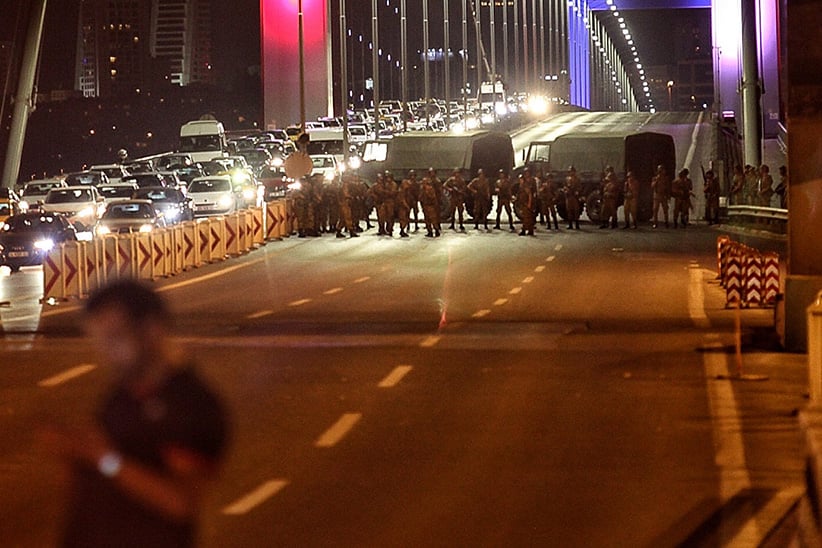 Turkish soldiers block Istanbul’s Bosphorus Bridge on July 15, 2016 in Istanbul, Turkey. Istanbul’s bridges across the Bosphorus, the strait separating the European and Asian sides of the city, have been closed to traffic. Reports have suggested that a group within Turkey’s military have attempted to overthrow the government. Security forces have been called in as Turkey’s Prime Minister Binali Yildirim denounced an “illegal action” by a military “group”, with bridges closed in Istanbul and aircraft flying low over the capital of Ankara. (Gokhan Tan/Getty Images)

ANKARA, Turkey — Turkey’s armed forces “fully seized control” of the country Friday, according to a statement from the military published by a Turkish news agency, as gunfire was heard outside military headquarters, fighter jets buzzed over the capital and vehicles blocked two major bridges in Istanbul. The prime minister, however, said there was an “attempt” at a coup.

Soldiers blocked entry to Ataturk Airport where four tanks were stationed, according to the private Dogan news agency. Two other tanks and a military vehicle were stationed in front of the VIP terminal. The report said the soldiers had entered the tower and stopped all flights.

The military said it seized control “to reinstall the constitutional order, democracy, human rights and freedoms, to ensure that the rule of law once again reigns in the country, for the law and order to be reinstated.”

The military statement went on to say that “all international agreements and commitments will remain. We pledge that good relations with all world countries will continue.”

Prime Minister Binali Yildirim said that a group within the military has engaged in what appeared to be an attempted coup.

Yildirim told private NTV television: “it is correct that there was an attempt,” when asked if there was a coup. Yildirim didn’t provide details, but said Turkey would never allow any “initiative that would interrupt democracy.”

“We are focusing on the possibility of an attempt (coup),” Yildirim said. “There was an illegal act by a group within the military that was acting out of the chain of military command. Our people should know that we will not allow any activity that would harm democracy.”

Military jets were heard flying over Ankara and Istanbul. Gunfire was heard outside Turkey’s military headquarters in Ankara, while media reports said ambulances were seen out front.

“There are certain groups who took the arms trusted to them by the state and pointed them toward state employees,” Yildirim said. “We shall determine soon who they are. Our security forces have acted against these groups.”