Turkish mourners sing about lost miners as they bury relatives 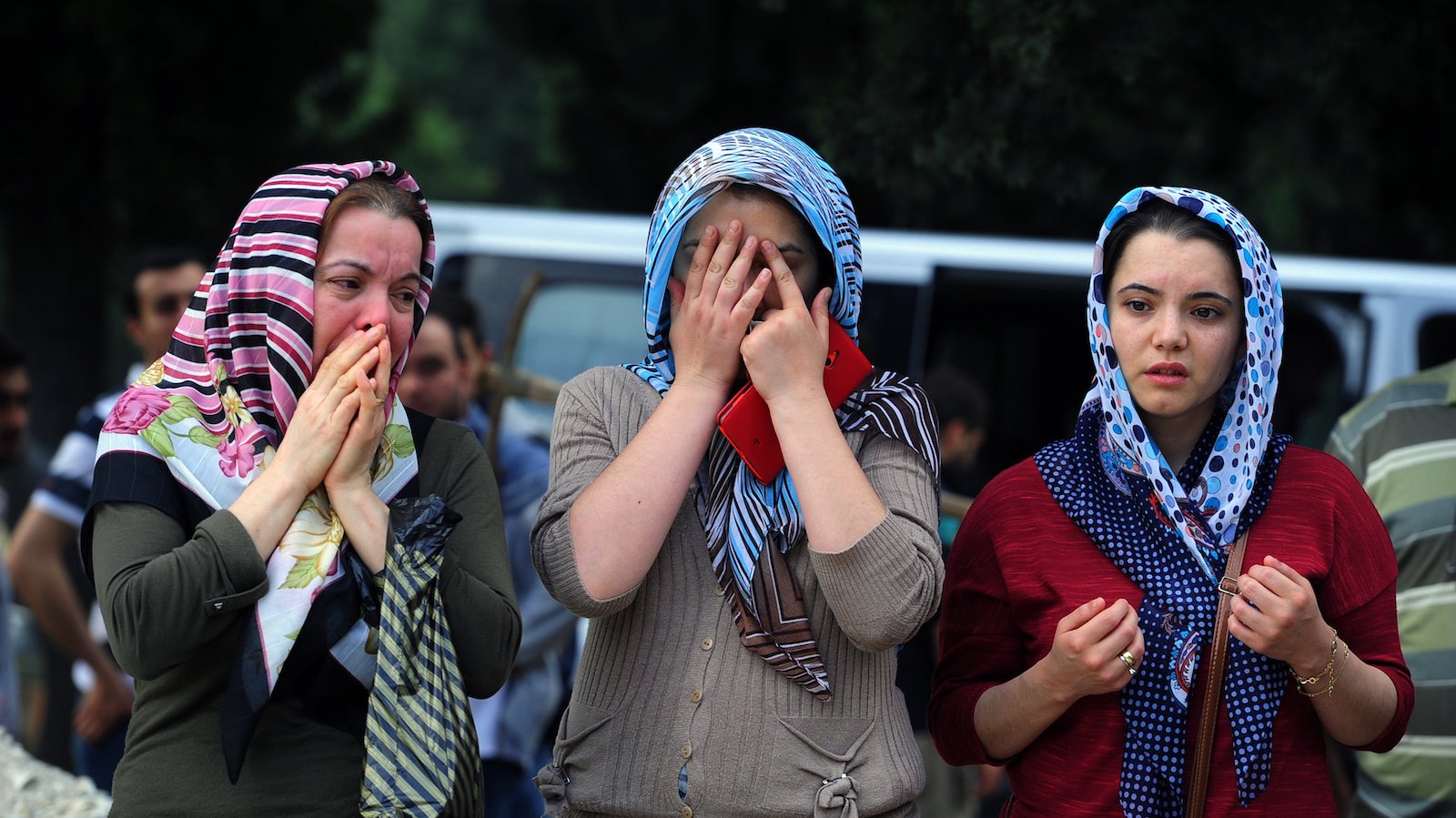 People attend a mine accident victim’s burial in Soma, Turkey, Wednesday, May 14, 2014. Nearly 450 miners were rescued, the mining company said, but the fate of an unknown number of others remained unclear as bodies are still being brought to the surface and burials are underway after one of the world’s deadliest mining disasters. (AP Photo/Emre Tazegul)

SOMA, Turkey — Women sang improvised ballads about the departed over freshly dug graves Thursday, even as backhoes carved row upon row of graves into the dirt and hearses lined up outside the cemetery with more victims of Turkey’s worst mining disaster.

Rescue teams recovered another eight victims, raising the death toll to 282, with some 142 people still unaccounted for, according to government figures. The disaster Tuesday has set off protests around Turkey and thrown Prime Minister Recep Tayyip Erdogan’s presidential ambitions off stride. Blackening his reputation further, one of Erdogan’s aides was seen kicking a protester held on the ground by police.

At a graveyard in the western town of Soma, where coal mining has been the main industry for decades, women wailed loudly in an improvised display of mourning. They swayed and sang songs about their relatives as the bodies were taken from coffins and lowered into their graves. Pictures of the lost relatives were pinned onto their clothing.

“The love of my life is gone,” some sang, chanting the names of dead miners.

No miner has been brought out alive since dawn Wednesday from the Soma coal mine where the explosion and fire took place. Many mourners said they spent their whole lives fearing something like this.

“The wives of the miners kiss their husbands in the morning. When they come back, even if they are five minutes late, everyone starts calling. You never know what is going to happen,” said Gulizar Donmez, 45, the daughter and wife of a miner and neighbour of one of the victims.

Energy Minister Taner Yildiz said the search for survivors had been hampered by a mine fire that had spread to a conveyor system — engulfing a 200 metre-long (650-foot) stretch — but progress had been made Thursday on extinguishing it. Rescue operations have been suspended several times as burning coal inside created toxic fumes and too-risky conditions for the rescue teams.

Emergency crews detected a drop in carbon monoxide levels “which means that the fire has gotten smaller,” he said.

Erdogan, who is expected to soon announce his candidacy for Turkey’s presidential election in August, was not welcome during his visit to the area Wednesday. He was forced to take refuge at a supermarket after angry crowds called him a murderer and a thief, in a reference to alleged corruption, and clashed with police.

Turkish newspapers Cumhuriyet, Milliyet and others on Thursday printed photographs they said were of an Erdogan aide kicking a protester who was on the ground and being held by special forces police. The papers identified the aide as Yusuf Yerkel.

The prime minister’s office on Thursday distanced itself from the incident, with one official saying the issue was Yerkel’s “own personal matter.” The official, who was not authorized to give his name to the press without authorization, said there was a “melee” as Erdogan entered a building but denied Turkish media reports that he had thrown a punch.

“The pain is felt by us all,” he said. The mood was more restrained than during Erdogan’s visit, though locals angry at what they saw as the slow rescue operation still shouted jibes at him, demanding more should be done to reach possible survivors.

Erdogan appeared somewhat tone-deaf to residents’ grief Wednesday, calling mining accidents “ordinary things” that occur in many other countries after giving examples of 19th-century mine accidents in Britain.

Erdogan has made no secret of his desire to become Turkey’s first popularly elected president. His party swept local elections in March despite a corruption scandal that forced him to dismiss four government ministers in December and later also implicated him and family members. Erdogan denies corruption, calling the allegations part of a plot to bring his government down.

Protests broke out in Istanbul, Ankara and other cities Wednesday over the deaths and poor safety conditions at mines around the country. In Istanbul and Izmir, authorities used water cannons and tear gas to break up the protests. Turkey’s largest trade union confederation, representing some 800,000 workers, joined a one-day strike by other unions to demand better conditions for workers.

Miners in Zonguldak, obeying the strike, gathering in front of a pit Thursday but did not enter it. In Istanbul, a group chanted anti-government slogans and carried a large banner that read: “It’s not an accident, it’s murder.”

Authorities said the disaster followed an explosion and a fire at a power distribution unit, and most deaths were caused by carbon monoxide poisoning.

The government has said 787 people were inside the coal mine at the time of Tuesday’s explosion, and that 383 were rescued, many with injuries. Tuesday’s explosion tore through the mine as workers were preparing for a shift change, which likely raised the casualty toll.

The death toll made it Turkey’s worst mining accident, topping a 1992 gas explosion that killed 263 workers near the Black Sea port of Zonguldak.

Erdogan promised that Tuesday’s tragedy would be investigated to its “smallest detail” and that “no negligence will be ignored.” Hurriyet newspaper reported that a team of 15 prosecutors has been assigned to investigate the accident.

Turkey’s Labor and Social Security Ministry said the mine had been inspected five times since 2012, most recently in March, when no safety violations were detected. But the country’s main opposition party said Erdogan’s ruling party had recently voted down a proposal to hold a parliamentary inquiry into a series of small-scale accidents at the mines around Soma.