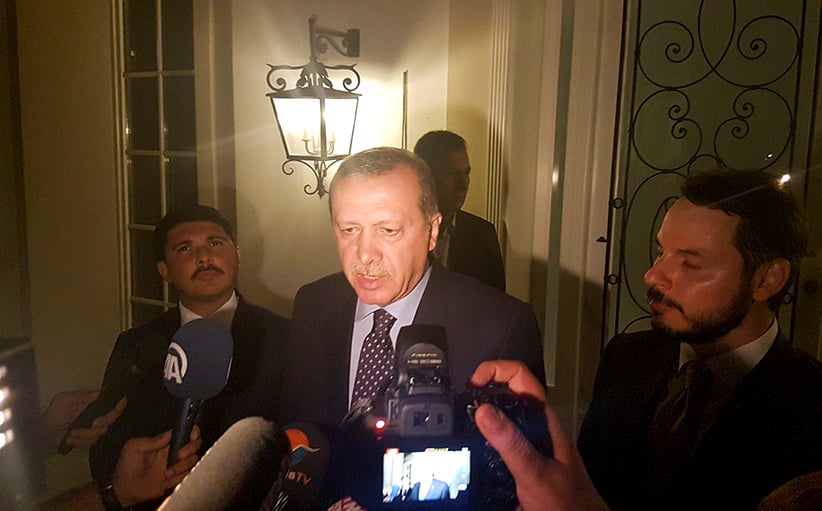 ANKARA, Turkey — Turkish officials said Saturday morning the government had appeared to have repelled an attempted military coup following a night of explosions, air battles and gunfire across the capital that left at least 17 dead, according to state-run media.

President Recep Tayyip Erdogan, in an interview over FaceTime with the CNN Turk station, dismissed the military action as “an attempt at an uprising by a minority within our armed forces.” His office declined to disclose his whereabouts, saying only that he was in a secure location.

Turks took to the streets of cities across the country waving national flags throughout the attempted coup to show their support for the government.

By Saturday morning, a top Turkish official said the coup attempt appeared to have been repelled. The senior official told The Associated Press that all government officials were in charge of their offices. The official requested anonymity because of the sensitivity of the issue.

Earlier, Nuh Yilmaz, a spokesman for Turkish National Intelligence told CNN Turk the coup attempt had been quashed. Yilmaz added that Gen. Hulusi Akar, the military chief of staff, was back in control and “everything is returning to normal.”

The chaos, included a reported bomb explosion at the parliament, capped a period of political turmoil in Turkey blamed on Erdogan’s increasingly authoritarian rule, which has included a government shake up and a crackdown on dissidents and opposition media.

Critics also have blamed Erdogan for taking a hard line on Turkey’s Kurdish rebels after the collapse of peace efforts, leading to deadly clashes that have increased military casualties. His government has also come under scrutiny for allegedly tolerating the flow of fighters and weapons to rebel groups fighting the government in Syria in the early years of the civil war there, fueling the growth of the Islamic State group. That policy, according to analysts, backfired when Turkey took on a more active role in the U.S.-led coalition against the extremists, who have since been blamed for a series of deadly bombings on Turkish soil.

The coup attempt began late Friday, with a statement from the military saying it had seized control “to reinstall the constitutional order, democracy, human rights and freedoms, to ensure that the rule of law once again reigns in the country, for law and order to be reinstated.”

Fighter jets buzzed overhead, gunfire erupted outside military headquarters and vehicles blocked two major bridges in Istanbul. Soldiers blocked entry to Istanbul’s main Ataturk Airport, where four tanks were stationed, according to the private Dogan news agency. Two other tanks and a military vehicle were stationed in front of the VIP terminal. Dogan said the soldiers had entered the tower and stopped all flights.

But the military did not appear unified, with top commanders taking to television to condemn the action and order troops back to their barracks.

“Those who are attempting a coup will not succeed. Our people should know that we will overcome this,” Gen. Zekai Aksakalli, the commander of the military special forces, told the private NTV television by telephone.

Fighter jets under the control of loyalist forces were flying over the capital to strike at helicopters flown by coup supporters, the state-run Anadolu news agency said. Private NTV television reported that one helicopter was shot down.

“The military commanders have made it clear that the coup plotters violated the chain of command,” presidential spokesman Ibrahim Kalin told NTV. “The people have shown that they stand in solidarity with democracy and the elected government.”

But the sounds of explosions and continued to ring out in the capital.

During the fighting, 17 police officers were killed in a helicopter attack on police special forces headquarters on the outskirts of Ankara, Anadolu said.

During his FaceTime interview, Erdogan asked his supporters to take to the streets to shore up the government.

“Let us gather in our squares, at our airports as the people and let that minority group come upon as with their tanks and artillery and do whatever they wish to do,” Erdogan said.

Turks appeared to heed that call early Saturday marching through the streets of Izmir and Istanbul, waving Turkish flags and gathering in the main square in the capital, Ankara. The Dogan news agency reported that soldiers fired on a group of people trying to cross the Bosporus bridge to protest the attempted coup, and that some people have been hurt. TV footage showed people running for cover as shots rang out.

Troops also fired in the air to disperse a growing crowd of government supporters at the Taksim monument in Istanbul as military helicopters flew overhead. A nearby mosque made an anti-coup announcement over its loudspeakers.

A dozen tanks were seen moving toward a palace used by the prime minister and deputy prime ministers. When a car tried to stop one of the tanks, the tank rammed through the vehicle. Those in the car escaped.