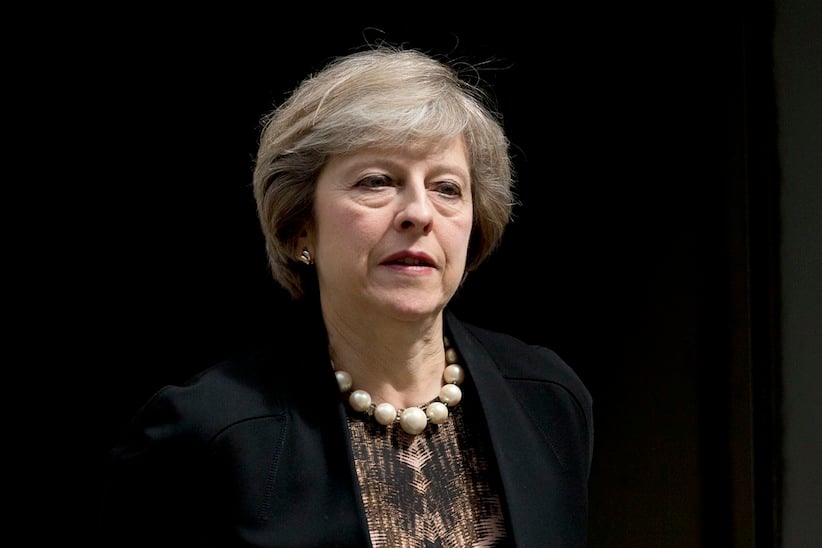 With the British currency plunging to its lowest point in three decades, Home Secretary Theresa May scored a substantial victory in the first round of voting to determine who will follow Cameron as party leader and prime minister.

She garnered just over half the votes cast, with 165 Conservative Party members of Parliament backing her. Her strong showing does not guarantee she will eventually reside at 10 Downing Street, however, as lawmakers will vote until they narrow the field to two candidates and then put the matter to a vote before the entire party membership.

That means more twists and turns are likely in the vital leadership race. The victor, to be announced Sept. 9, will be charged with becoming prime minister and leading what are expected to be tense negotiations to extricate Britain from the 28-nation EU bloc.

May, who backed remaining in the EU during the hard-fought campaign, said she was pleased by the result in the leadership vote and very grateful to her colleagues.

“There is a big job before us: To unite our party and the country, to negotiate the best possible deal as we leave the EU, and to make Britain work for everyone,” said May, who now says the peoples’ desire to leave the EU must be respected.

The ramifications of leaving the EU’s vast single market of 500 million consumers are roiling financial markets. The British pound was down sharply Tuesday, as were shares in U.K. real estate companies, amid concerns that the exit from the EU will hurt property prices in Britain.

Amid the upheaval, Bank of England Gov. Mark Carney projected a sense of calm Tuesday as he relaxed capital requirements for banks to free up money for loans for homes and businesses.

“The bank can be expected to take whatever action is needed to promote monetary and financial stability, and as a consequence, support the real economy,” Carney said. “These efforts mean we can all look ahead, not over our shoulders.”

The Bank of England has cited commercial real estate as one of the risks to the British economy. The sector had taken in capital from overseas and had become “stretched,” the bank said.

Financial groups Aviva Investors, Standard Life and M&G Investments stopped trading Tuesday in commercial property funds following a rapid increase in investors trying to liquidate their holdings. They said they stopped trading to protect other investors who wished to remain in their respective funds.

The funds buy commercial property and offer shares to investors. Some of those investors now appear worried that companies might opt to leave London to move operations to mainland Europe to retain access to the lucrative EU market. That would leave empty office space and weigh down on commercial real estate values in Britain’s capital.

“The dominos are starting to fall in the U.K. commercial property market, as yet another fund locks its doors on the back of outflows precipitated by the Brexit vote,” Laith Khalaf, a senior analyst at Hargreaves Lansdown, said after the move by Aviva. “It’s probably only a matter of time before we see other funds follow suit.”

There were major drops in property companies’ shares. Barratt Developments was down 6.2 per cent, Taylor Wimpey 6.5 per cent and Persimmon 5.4 per cent.

Top EU officials, wondering with whom they will eventually negotiate, had sharp comments Tuesday about the U.K. leaders who pushed so hard to get Britain out of the EU _ and then stepped aside rather than take part in the delicate talks.

They include former London Mayor Boris Johnson, who declined a Conservative leadership bid after losing key support, and Nigel Farage, who resigned as leader of the U.K. Independence Party after helping lead Britain to a Brexit, as the exit plan is known.

“Patriots don’t resign when things get difficult,” he said. “They stay.”

Guy Verhofstadt, the Liberal bloc leader in the EU Parliament, likened the departed leaders to “rats fleeing a sinking ship.”

The grim economic news in Britain was briefly offset by a rare glimpse of two Conservative Party grandees talking bluntly about their younger colleagues, apparently unaware they were being filmed by TV cameras.

Rifkind, for his part, said he didn’t care who gets into the final round as long as it isn’t Justice Secretary Michael Gove, who threw the race into chaos last week by withdrawing support for Johnson and running himself.

Gove finished a disappointing third in the voting, bested by Andrea Leadsom. Stephen Crabb and Liam Fox have left the race. The next round of voting is set for Thursday.