U.K. election: Sturgeon against the current

Why the outcome of the U.K. election may be in the hands of a surprising new political star from Scotland 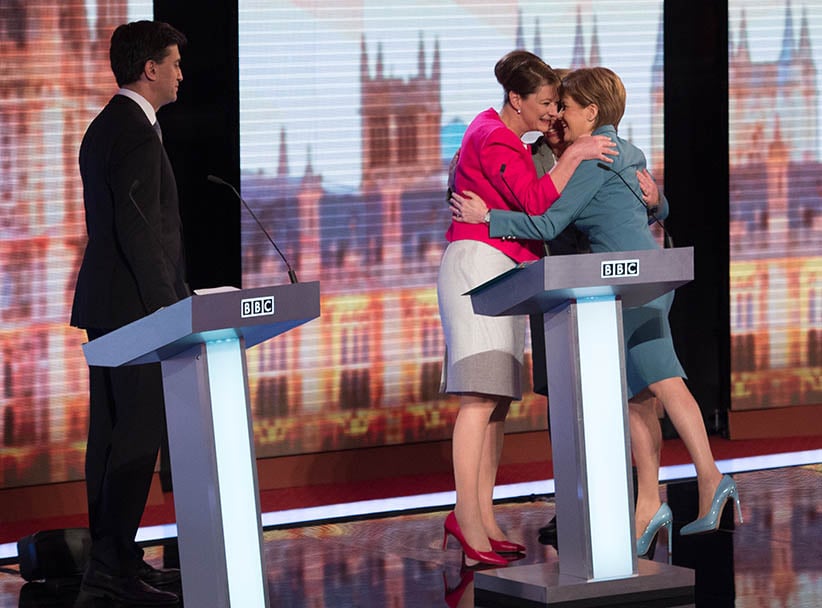 This profile of SNP leader Nicola Sturgeon was published last month in Maclean’s.

Boris Johnson recently called her “a scorpion on a frog’s back,” and Piers Morgan believes she is “the most dangerous woman in the world.” Her proposed coalition with the Labour Party would, according to Prime Minister David Cameron, be “a match made in hell,” and her recent policy manifesto was described by the press as “the longest ransom note in history.”

But, despite all this, Nicola Sturgeon, the diminutive, twinkly-eyed leader of the Scottish National Party (SNP) has emerged as the unrivalled star of the U.K. election campaign. This is not to say Sturgeon is going to be elected prime minister, of course, just that she hit both Labour and—less of a surprise—the Conservatives where it hurts: in her homeland of Scotland.

Her success there is no big surprise. Scotland, still smarting from an unsuccessful referendum that divided the nation, is keen to get on with the economic devolution plan promised by the government in the last days of the independence vote. Scotland has always leaned firmly to the left and Sturgeon, a bright, well-spoken woman from a working-class background, looks well-positioned to deliver the mix of post-austerity policies and fiscal independence most Scots crave.

But it’s her popularity in the rest of Britain that’s more fascinating. Her widely acknowledged charisma may not translate into widespread votes, but she is increasingly being touted as a breath of fresh air, compared to the likes of Westminster establishment figures Cameron, Ed Miliband and Nick Clegg—who are all perceived, in their own ways, as “out of touch” with the concerns of regular folks or, as they call them here, “working Britons.”

A large part of the blame for Sturgeon’s curious rise to prominence can be laid at the feet of Cameron himself who, by refusing to take part in televised debates without the inclusion of all the smaller parties, gave Sturgeon the national exposure that catapulted her into an election superstar.

Unlike Cameron, she’s proven herself unafraid of upbraiding U.K. Independence Party Leader Nigel Farage for his xenophobic, anti-immigrant stance. And, unlike Miliband (who has rejected the notion of an SNP-Labour coalition outright), she has come across as more conciliatory and flexible in the face of an unpredictable election result. The fact is, in order to become prime minister, Miliband might well have to climb down from his rather petulant anti-SNP stance. Meanwhile, the Tories are doing everything they can to convince British voters that a Labour government propped up by the SNP would be a disaster (hence the “ransom note” analogy).

But what Cameron’s strategy to open up the playing field to the little guys seems to have done, more than anything, is inexorably change the landscape of the British left wing from a male-dominated duality of new versus old Labour to a diverse and, some would argue, hopelessly fractured spectrum of smaller parties dominated exclusively by women. In the second round of televised debates, to which Cameron didn’t even bother showing up, Leanne Wood, leader of Plaid Cymru (a.k.a. the Welsh National Party), and the Australian-born Green Leader Natalie Bennett held their own against Miliband and Farage, with Sturgeon once again “winning” as the most poised and effective communicator on stage.

A photo of Miliband waiting to shake hands with all three female party leaders—while they group-hugged—after the debate had the British media marvelling how much difference one election makes. Guardian columnist Jonathan Jones called it the election of a new British left, with the anti-austerity parties, the SNP, specifically, making the running. “There really is a radical mood in these countries, and forces have woken up that traditional Westminster, or the mainstream media, or perhaps we ourselves, can’t comprehend,” Jones said. “We’re not necessarily who we thought we were.” With recent polls suggesting Sturgeon’s SNP will be the deal breaker—or coalition maker—on May 7, the U.K. has some soul-searching to do.