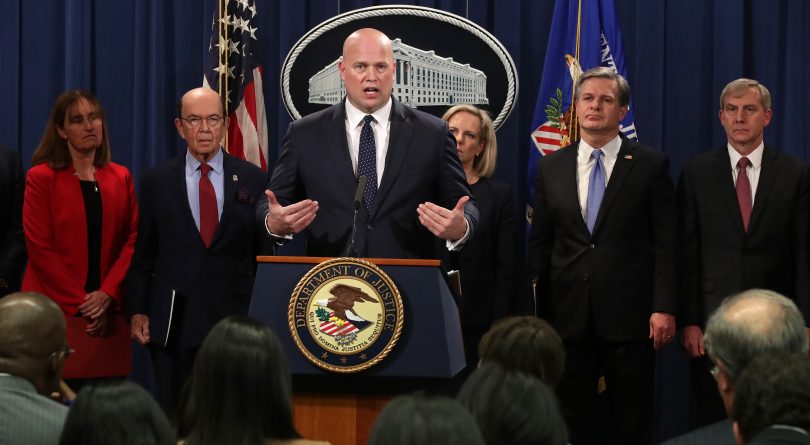 WASHINGTON — The U.S. Department of Justice is formally levelling criminal charges against Chinese tech juggernaut Huawei Technologies, two subsidiaries and Meng Wanzhou, the influential chief financial officer who has been free on bail in Vancouver since she was arrested by Canadian authorities nearly two months ago.

Rather than being the work of one or two rogue actors, Whitaker said the alleged conduct bore the hallmarks of “corporate-sponsored behaviour” that was directed as company policy.

“These are very serious actions by a company that appears to be using corporate espionage and sanctions violations to not only enhance, potentially, their bottom line, but also to compete in the world economy,” he said.

“This is something the United States will not stand for, and we’re going to continue to investigate and prosecute these types of cases, because ultimately it undermines the national security and economic security of our country.”
Whitaker confirmed that the Justice Department is proceeding with its extradition efforts against Meng in accordance with the existing timetable, which requires that the formal request be registered with the Canadian courts by Wednesday. Both he and FBI director Christopher Wray proffered thanks to their Canadian counterparts for their help and, in Whitaker’s words, “their steadfast commitment to the rule of law.”

“Both sets of charges expose Huawei’s brazen and persistent actions to exploit American companies and financial institutions, and to threaten the free and fair global marketplace,” Wray said. “I’d also like to thank our law enforcement partners in Canada for their continued and invaluable assistance to the United States in law enforcement matters like this one.”

That assistance has given the federal government in Ottawa a major diplomatic migraine.

Meng’s arrest Dec. 1 touched off a political furor marked by days of angry anti-Canada rhetoric from China’s foreign ministry, culminating Sunday in the firing of John McCallum as Canada’s ambassador to China. McCallum, formerly a longtime Liberal MP and cabinet minister, had publicly expressed confidence in Meng’s case against any U.S. extradition order.

Meng’s detention was also marked last month by President Donald Trump’s public musings about the possibility that the case might help the U.S. in its trade negotiations with China.

That plot appeared to thicken Monday when, less than an hour before the Department of Justice news conference was to begin, the White House announced that its team of high-level economic advisers would meet a delegation from China on Wednesday for two days of trade talks.

White House spokeswoman Sarah Sanders insisted, however, that the two developments were unrelated.

“Those two things are not linked; they’re a totally separate process,” Sanders said. “The negotiations on the trade front will continue to be ongoing.”