Top commander of U.S. and coalition forces corrects the record on why 22 people were killed at a medical clinic in northern Afghanistan over the weekend 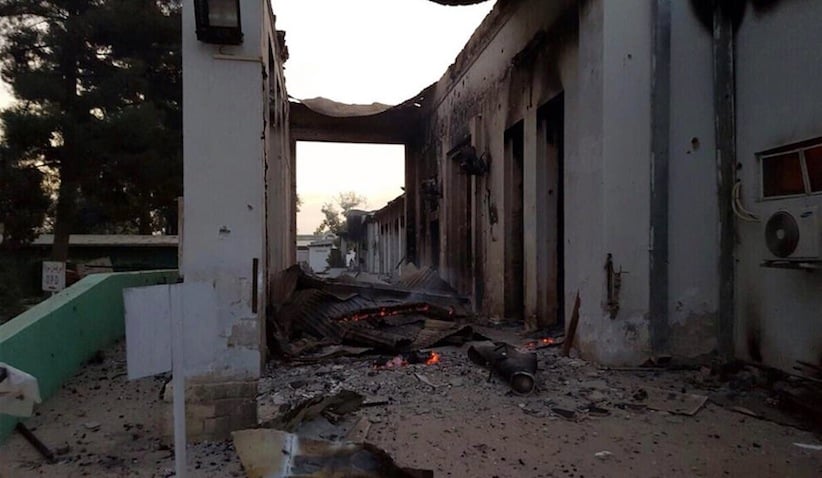 The burnt Doctors Without Borders hospital is seen after an explosion in the northern Afghan city of Kunduz, Saturday, Oct. 3, 2015. (Médecins Sans Frontières via AP)

WASHINGTON — Afghan forces who reported being under Taliban fire requested the U.S. airstrike that killed 22 people at a medical clinic in northern Afghanistan over the weekend, the top commander of American and coalition forces in Afghanistan said Monday, correcting an initial U.S. statement that the strike had been launched because U.S. forces were threatened.

“We have now learned that on Oct. 3, Afghan forces advised that they were taking fire from enemy positions and asked for air support from U.S. forces,” Campbell said. “An airstrike was then called to eliminate the Taliban threat and several civilians were accidentally struck. This is different from the initial reports, which indicated that U.S. forces were threatened and that the airstrike was called on their behalf.”

The clinic was operated by the medical charity Doctors Without Borders. The attack killed at least 22 people and wounded dozens more, setting the hospital on fire.

In response to Campbell’s remarks, the organization’s general director, Christopher Stokes, said the U.S. had admitted that it attacked the facility.

“The U.S. military remains responsible for the targets it hits, even though it is part of a coalition,” Stokes said. “There can be no justification for this horrible attack. With such constant discrepancies in the U.S. and Afghan accounts of what happened, the need for a full transparent independent investigation is ever more critical.”

On Saturday, Afghan officials said Taliban fighters were in the hospital at the time of the airstrike, but that is in dispute.

On Sunday, NATO, under whose umbrella the U.S.-led coalition operates in Afghanistan, issued a statement saying U.S. forces had conducted an airstrike against “insurgents who were directly firing upon U.S. service members” who were advising Afghan forces in Kunduz. The statement also said NATO was undertaking a preliminary assessment of the incident by a multi-national “casualty assessment team,” and that it would produce initial results “in a matter of days.”

The U.S. military is doing its own standard investigation under the Uniform Code of Military Justice.

Campbell’s revised account does not clarify whether the clinic was targeted in error or whether U.S. military personnel followed procedure. They are required to verify that the target of the requested airstrike is valid before firing. Asked about those procedures, Campbell said he would not discuss the rules of engagement under which U.S. forces operate.

“If errors were committed we will acknowledge them,” Campbell said. “We’ll hold those responsible accountable and we’ll take steps to ensure mistakes are not repeated.”

Asked whether he could confirm in general terms whether hospitals and other civilian facilities like mosques and schools are off limits to U.S. airstrikes, Campbell replied, “Very broadly, we do not strike those kind of targets, absolutely.”

He declined to say who authorized the strike. He said it was carried out by an AC-130 gunship, which is an Air Force special operations aircraft sometimes used against close-range ground targets. The aircraft is armed with side-firing weapons including 40mm and 105mm cannons and a 25mm Gatling gun.

Campbell declined to provide more details, saying military investigations by the U.S. as well as Afghanistan are ongoing. He said he learned from the U.S. military’s lead investigator that it was the Afghans, not the Americans, who requested the airstrike.

Kunduz has been the scene of heavy fighting in recent days. The Taliban captured the city earlier this month, but Afghan forces retook it after several days. Clashes were still underway between government forces and the Taliban on the city’s outskirts on Monday, according to Khosh Mohammad, a member of the Kunduz provincial council.

Campbell, whose headquarters is in Kabul, was in Washington on Monday because he is testifying before two congressional committees this week. He noted that the Kunduz airstrike happened one day after a U.S. C-130 cargo plane crashed at an air base in northern Afghanistan, killing all six U.S. crew members as well as five civilian passengers.

Campbell said the bodies of the six C-130 crew members were scheduled to arrive at Dover Air Force Base, Delaware, on Monday.

Campbell is expected to testify about his recommendations on the future of the U.S. military mission in Afghanistan. A key question is whether President Barack Obama will alter his plan for reducing the U.S. troop presence from its current level of about 9,800 to leave only an embassy-based security co-operation office after 2016.

Defence Secretary Ash Carter said Monday the U.S. intends to continue a military presence after 2016, adding, “it’s not a matter of whether but how many and how.”

Speaking during a press conference in Madrid, Carter said, “The president and all the rest of us continue to respond to and adjust to circumstances there and I expect that will continue.”

He said the Pentagon is providing options to the White House and Obama will be making decisions about future force levels later this fall.