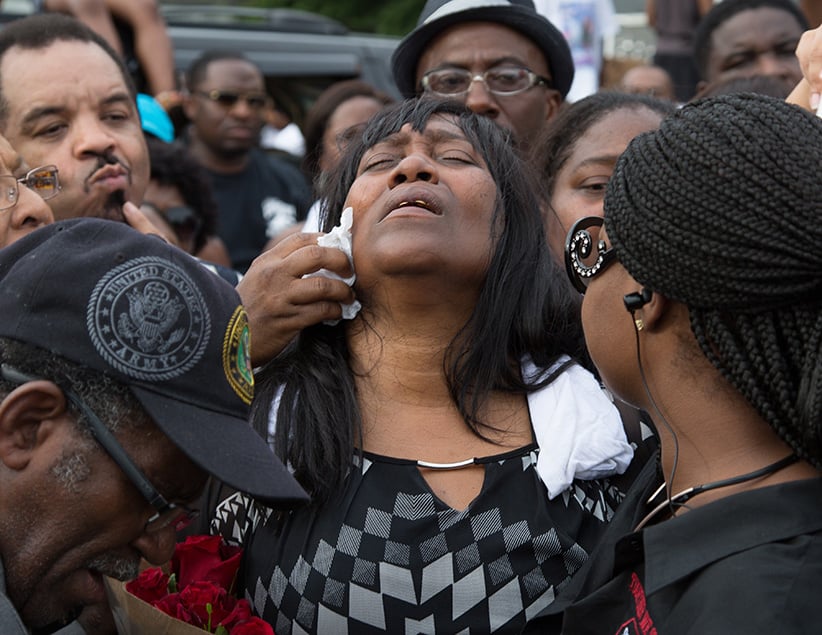 Sandra Sterling, reacts during community vigil in memory of her nephew, Alton Sterling, who was shot dead by police, at the Triple S Food Mart in Baton Rouge, Louisiana, U.S. July 6, 2016. (Jeffrey Dubinsky/Reuters)

BATON ROUGE, La.—The Justice Department doesn’t have a timetable for completing its investigation of a black man’s fatal shooting by police during an altercation with two white officers outside a Baton Rouge convenience store more than three months ago, a law enforcement official said Tuesday.

Federal authorities have dedicated hundreds of hours to their investigation of Alton Sterling’s July 5 shooting and are “committed to taking all necessary steps to reach a just result based solely on the facts and the law,” U.S. Attorney Walt Green said in a written statement.

“The investigation remains ongoing, and will conclude only when we have gathered, reviewed and evaluated all available evidence,'”Green said.

Sterling was shot and killed by one of two Baton Rouge police officers he scuffled with outside the store where the 37-year-old was selling homemade CDs. The officers had responded to a call that Sterling had threatened someone with a gun. Cellphone video of the deadly encounter quickly spread on social media, sparking protests in Baton Rouge and beyond.

Green’s statement didn’t provide any new details of the investigation. And it didn’t satisfy a state legislator who said the Baton Rouge-based U.S. Attorney had promised more transparency.

“He hasn’t indicated anything that the public doesn’t already know,” state Rep. Ted James, a Baton Rouge Democrat, wrote in an email to The Associated Press. “There were promises made to the people of Baton Rouge and those promises have not been kept.”

In a letter to Green dated Sept. 29, James had asked the Justice Department to release some “basic information” about the investigation, including the names of people who have been interviewed by investigators and the number of federal agents assigned to the case.

James also called for the release of more “audio and video evidence.” In addition to cellphone video of the shooting, investigators also have police dashcam and bodycam video and store surveillance footage that hasn’t been made public.

“I recognize that my office cannot force Mr. Green or the federal government to be more responsive to our community,” James wrote in Tuesday’s email.

During a City Hall rally last month, three of Sterling’s aunts joined dozens of protesters in calling for a swift resolution to the investigation. One of the aunts, Sandra Sterling, said it seemed as if her nephew’s death had been overshadowed by historic flooding that damaged tens of thousands of homes in the Baton Rouge area in August.

Blane Salamoni and Howie Lake II, the two officers involved in Sterling’s shooting, were placed on administrative leave pending the outcome of the investigation.