U.S. Attorney General Loretta Lynch: 'This law provides no benefit to society, and all it does is harm innocent Americans.' 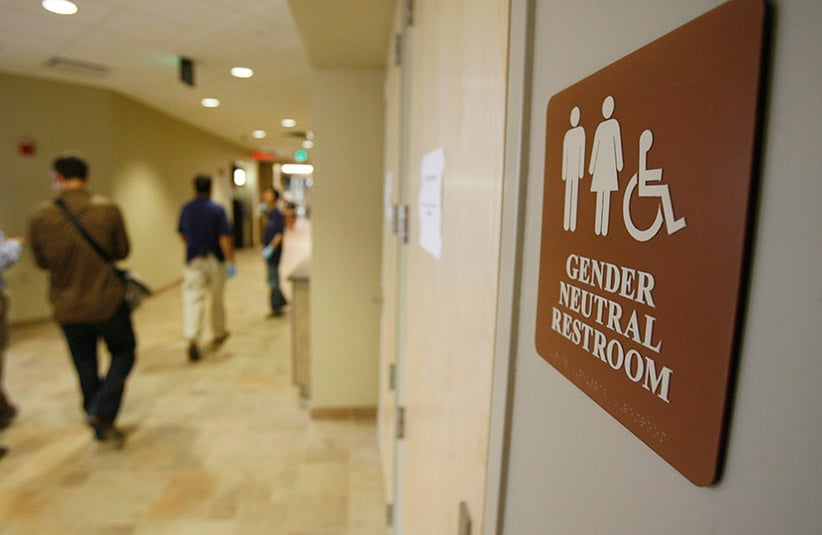 A sign marks the entrance to a gender neutral restroom at the University of Vermont, Aug. 23, 2007. (Toby Talbot, AP/CP)

RALEIGH, N.C. — A potentially epic clash over transgender rights took shape Monday when the U.S. Justice Department sued North Carolina over the state’s bathroom law after the governor refused to back down.

In unusually forceful language, U.S. Attorney General Loretta Lynch said North Carolina’s law requiring transgender people to use public restrooms and showers corresponding to the gender on their birth certificate amounts to “state-sponsored discrimination” and is aimed at “a problem that doesn’t exist.”

“What this law does is inflict further indignity on a population that has already suffered far more than its fair share,” she said, speaking directly to residents of her native state. “This law provides no benefit to society, and all it does is harm innocent Americans.”

Billions of dollars in federal aid for North Carolina — and a potentially landmark decision regarding the reach of the nation’s civil rights laws — are at stake in the dispute, which in recent weeks has triggered boycotts and cancellations aimed at pressuring the state into repealing the measure.

Last week, the U.S. Justice Department said the law amounts to illegal sex discrimination and gave Gov. Pat McCrory until Monday to say he would refuse to enforce it. When the deadline arrived, a defiant McCrory instead sued the federal government, arguing that the state law is a “commonsense privacy policy” and that the Justice Department’s position is “baseless and blatant overreach.”

McCrory, a Republican who is up for re-election in November, accused the Obama administration of unilaterally rewriting federal civil rights law to protect transgender people’s access to bathrooms, locker rooms and showers across the country.

“This is not a North Carolina issue. It is now a national issue,” he said.

Later in the day, the Justice Department struck back by suing the state, seeking a court order declaring the law discriminatory and unenforceable.

A judge could begin hearing arguments in the competing cases within weeks, during which North Carolina will probably try to stop the government from temporarily blocking the law or stripping away federal funding, said Rina Lindevaldsen, a Liberty University professor specializing in family and constitutional law.

With appeals courts around the country diverging on whether transgender people are protected under federal civil rights laws, “this seems like the kind of thing that’s on track for the Supreme Court,” she said.

Defenders of the law have argued that it is needed to protect people from being molested in bathrooms. North Carolina’s top legislative leaders, both Republicans, repeated that fear in their own lawsuit filed Monday in defence of the law.

Allowing “anyone to use any public bathroom, locker room or shower based solely on that person’s self-declared gender ‘identity”’ would “create an opportunity for sexual predators of any sexual orientation to abuse the policy to facilitate their predation,” they warned.

Lynch, though, said supporters of the law invented a problem “as a pretext for discrimination and harassment.”

Stars such as Bruce Springsteen and Pearl Jam have cancelled shows in North Carolina over the law. PayPal abandoned a planned 400-employee operation centre in Charlotte, and Deutsche Bank froze expansion plans near Raleigh.

Nearly 200 corporate leaders from across the country, including Charlotte-based Bank of America, have urged the measure’s repeal, arguing it is bad for business because it makes recruiting talented employees more difficult.

The law, which took effect in March, was passed in reaction to a Charlotte ordinance allowing transgender people to use the bathroom that corresponds to their gender identity.

The new law also excludes lesbian, gay, bisexual and transgender people from state anti-discrimination protection and bars local governments from adopting their own anti-bias measures. But the Justice Department has focused largely on the bathroom provisions.

Nearly half of North Carolina registered voters last month said cities should be prohibited from passing ordinances such as Charlotte’s, according to a poll by Elon University. Nearly four out of 10 said cities should have that leeway.

A CNN/ORC Poll released Monday found 57 per cent of Americans oppose laws that require transgender people to use facilities corresponding with their sex at birth. Three out of four said they would favour laws that guarantee equal protection for transgender people in jobs, housing and public accommodations.

Several other states in recent months have proposed similar laws limiting protections for gay, bisexual and transgender people. On Monday, the American Civil Liberties Union of Mississippi sued that state over a law that will allow workers to cite their religious objections to gay marriage to deny services to people.

North Carolina Attorney General Roy Cooper, a Democrat running against McCrory for governor, has refused to defend the law and has called for its repeal. On Monday, he warned in a video that McCrory “is pouring gas on the fire that he lit” when he signed the measure.

Lynch likened her agency’s involvement in the North Carolina dispute to the fight against both racial segregation and prohibitions against gay marriage.

“This is about the dignity and the respect that we accord our fellow citizens,” Lynch said. “It’s about the founding ideals that have led this country, haltingly but inexorably, in the direction of fairness, inclusion and equality for all Americans.”

The Justice Department noted a ruling last month by a federal appeals court that a transgender Virginia high school student has the right to use bathrooms that match his new identity.

The ruling by a three-judge panel of the 4th U.S. Circuit Court of Appeals is binding on five states, including North Carolina. A Virginia school board is seeking a re-hearing by the entire appeals court.

The U.S. Education Department and other federal agencies could try to cut off money to North Carolina to force compliance.

The state university system risks losing more than $1.4 billion. An additional $800 million in federally backed loans for students who attend the public universities could also be in danger.