19-year-old Mason Wells: 'I don't know if I was born under a lucky star' 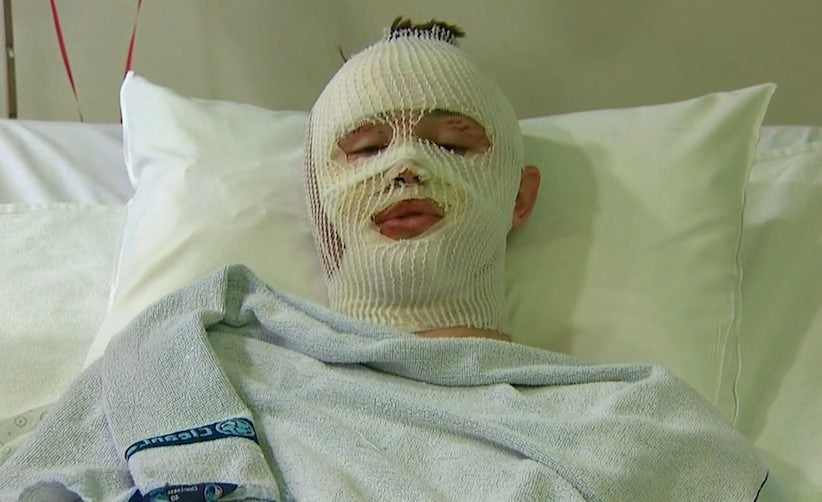 Mason Wells, an American survivor of the attacks in Belgium, is from Sandy, Utah. He was in Boston at the time of the Boston marathon attack, having gone to support his mother in her race. (Pool TV via AP)

GHENT, Belgium — An American teenager wounded in the Brussels Airport attack is lucky to be alive. And he knows it.

Mason Wells, his face covered in bandages, was in a hospital in the Belgian city of Ghent on Friday, where he told The Associated Press about surviving his second terror attack. Three years ago, the 19-year-old from Sandy, Utah, was just a block away from the pressure-cooker bomb that exploded while he was watching his mother run the Boston Marathon.

“I don’t know if I was born under a lucky star,” he said. “I was definitely fortunate to have escaped with the injuries that I’ve escaped with at the airport, being very close to the bombs.”

Wells, who is on a two-year Mormon mission to Belgium, talked to reporters via a video link from his hospital room, where he lay with a pillow propped behind his head and a light blue towel wrapped around his shoulders.

The former high school football and lacrosse player spoke from behind a mask of bandages, with only his eyes, mouth and left ear uncovered by the gauze dressings and mesh netting that held them in place.

“The blast was really loud,” Wells said in a strong, clear voice. “It even lifted my body a little bit. I remember feeling a lot of really hot and really cold feelings on the whole right side of my body. I was covered in a fair amount of blood, and not necessarily mine even.”

“I remember seeing, you know, fire in front of my face and also kind of fire down by my feet on the ground,” he said. “We were really close, I feel lucky to escape with what I did.”

Wells was at the back of the Delta Airlines check-in line when the first bomb exploded just before 8 a.m. on Tuesday and said he was running out of the airport when the second blast hit.

Taking a deep breath to collect himself, Wells remembered sitting on the sidewalk outside the airport “in my own blood” and experiencing a feeling of calm and peace that he attributed to the presence of God.

“If there’s anything I’ve taken out (of this), it’s that there’s someone greater than us that’s watching over us,” he said.

All three were accompanying a French missionary who was on her way to an assignment in Cleveland. Fanny Rachel Clain, 20, of Montelimar, France, has had surgery to remove shrapnel from her body and is being treated for second-degree burns to her hands and face, according to her family.

Two-year Mormon missions spent proselytizing in other states and countries are a rite of passage for young men in the faith. Women are encouraged to serve 18-month missions but do so at lower rates than men.

There are about 74,000 missionaries around the world. They are part of the Church of Jesus Christ of Latter-day Saints, a Utah-based religion that reports more than 15 million members worldwide.

Wells, who had four months left on his mission, was planning to major in engineering at the University of Utah next fall. He also hoped to reapply to the U.S. Naval Academy.

On Friday, he said he wouldn’t know what was possible until he knew the extent of his permanent injuries.

“For the moment, I’m just focusing on getting everything better,” Wells said.

And then he smiled.