While John Kerry and Boris Johnson insist all options on the table for Syria, they also add notes of caution 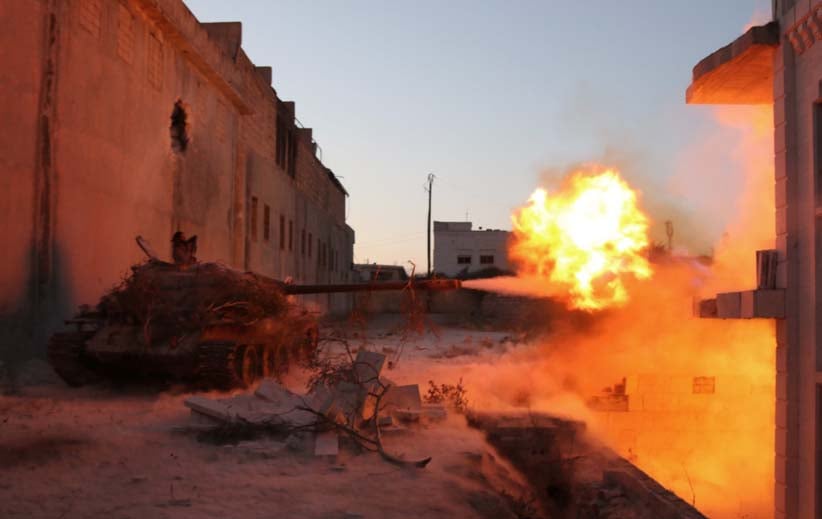 LONDON—The United States and Britain on Sunday acknowledged the Western world’s weak support for any military action against Syria’s government as they sought ways to pressure President Bashar Assad and his chief backer, Russia, to halt a deadly offensive in Aleppo. They tried to present it as a possibility, nevertheless.

After a meeting of 11 governments opposing Assad’s rule, U.S. Secretary of State John Kerry and British Foreign Secretary Boris Johnson each insisted all options were on the table. But their stark explanations about the danger of resorting to military force appeared to rule out such a move.

The result was a somewhat schizophrenic threat that was unlikely to scare Assad’s government or Russia as they move to crush the last rebel-held areas of Aleppo, Syria’s largest city.

“When a great power is involved in a fight like this, as Russia has chosen to be by going there and then putting its missiles in place in order to threaten people against military action, it raises the stakes of confrontation,” Kerry said after the meeting in London.

He said no one should be “lighting a fire” under a larger sectarian war in the Middle East or one drawing in superpowers against one another.

Johnson said Britain wanted to “ratchet up” pressure on Assad, Russia and Iran.

“No option is, in principle, off the table,” he told reporters.

Quickly expanding his answer, he added: “Be in no doubt that these so-called military options are extremely difficult and there is, to put it mildly, a lack of political appetite in most European capitals and certainly in the West for that kind of solution at present.”

The gathering in London came amid mounting international frustration with the 5 1/2 year conflict, which has killed as many as a half-million people, sparked Europe’s worst refugee crisis since World War II and enabled Islamic State militants to emerge as a global terror threat.

Kerry on Saturday launched a new diplomatic process with what he described as the major international players in the war _ the U.S., Russia, Saudi Arabia, Iran, Turkey, Qatar, Jordan, Iraq and Egypt. The renewed effort replaces last month’s U.S.-Russian cease-fire, which collapsed within days, and Washington’s now-abandoned talks with Moscow on a military partnership against the Islamic State group and al-Qaida militants.

Sunday’s gathering included America’s Arab allies from the meeting a day earlier along with European countries that were left out. Not everyone sounded convinced about Kerry’s effort.

“There is no step forward for a cease-fire,” French Foreign Minister Jean-Marc Ayrault said.

Even the U.S. has expressed skepticism about the chances for a diplomatic agreement with Assad’s military supporters, Russia and Iran.

But President Barack Obama doesn’t seem likely to approve an American military intervention before leaving office. He has consistently rejected such action against Assad, including three years ago when the Syrian leader crossed Obama’s “red line” by using chemical weapons.

“Let me make it clear,” he said. “President Obama has not taken any options off the table at this point in time. So we’ll see where we are in the next few days in the context of the discussions we’re having.”

Just a moment earlier, however, Kerry implied the opposite.

He emphasized that the U.S. and its partners must exhaust diplomatic possibilities, even if the situation in Syria becomes more dire. “Now, some people ask what happens to Aleppo if it were to fall,” Kerry said. “Well, the Russians should understand, and Assad needs to understand, that that does not end the war. This war cannot end without a political solution.

“So even if Aleppo were to fall, even if they have utterly destroyed it, which they are doing, that will not change the fundamental equation in this war because other countries will continue to support opposition, and they will continue to create more terrorists and Syria will be the victim in the end, as well as the region.”

Kerry said the U.S. and its partners were “discussing using every mechanism available to us” to stop the fighting.

“But I haven’t seen a big appetite in Europe of people to go to war,” he said, echoing Johnson. “I don’t see the parliaments of European countries ready to declare war. I don’t see a lot of countries deciding that that’s the better solution here.”