Analysis: A Democrat-controlled House is the rebuke the president richly deserved. Now, about those tax returns ... 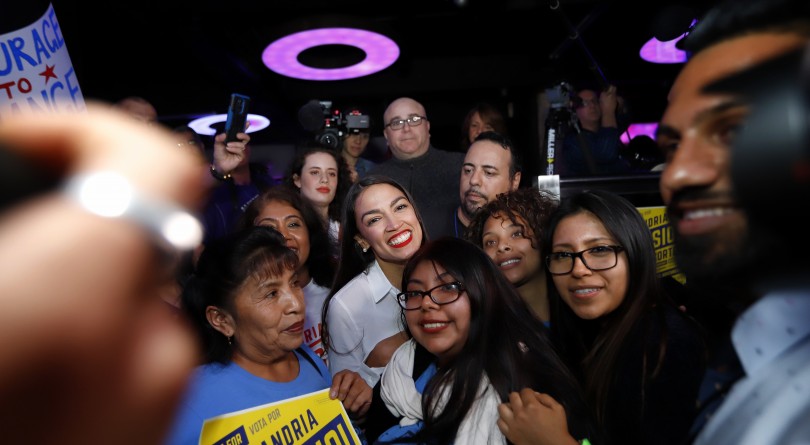 Alexandria Ocasio-Cortez with supporters at her victory celebration in Queens, N.Y.; the 29-year-old Democrat became the youngest woman elected to Congress. (Photo by Rick Loomis/Getty Images)

The world has seen, over the last two years, how President Donald Trump behaves when there’s not much to hold him back. He slashed at the norms of statesmanship and decorum, but the norms couldn’t slash back. He cavalierly concocted facts, but the Pinocchio-meters and pants-on-fire ratings of media fact-checkers failed to make him correct course (or phony statistics), and he tried using the term “fake news” to magic-erase all criticism. Judges did their share of pushing back on his anti-refugee agenda, while White House aides furtively snatched documents off his desk and shrugged off his orders to resist his darker impulses (junk a trade agreement, assassinate a foreign leader, y’know, et cetera et cetera). But he’s otherwise had his way.

A vital check on a U.S. president’s power finally kicked into gear on Tuesday, though, after a couple years of idling in a Jack-in-the-Box parking lot, munching on fries and blaring its stereo to shut out the rest of the world. Sure, there were the sighs from Speaker Paul Ryan, the Republican’s leader in the House of Representatives, as he was occasionally forced to bemoan a Trump tweet or odious remark. In an exit interview, Ryan vaguely hinted he did some of what the rogue Trump aides had done: “I can look myself in the mirror at the end of the day and say I avoided that tragedy, I avoided that tragedy, I avoided that tragedy.” Maybe that’ll be the stuff of a Ryan memoir that glosses over how little he did, in words or action, to fulfill a critical congressional role. All rear-view mirror stuff now. A Democrat, Nancy Pelosi or someone else, will take his speaker’s gavel in January, midterm voters have decided. And after two years of watching him strut about the political landscape unfettered, we are about to witness Donald Trump, chained. What a reduced, yet more snarling and angry beast that might be.

The House, controlled by Trump’s opponents, will almost certainly begin scrutinizing how his presidency appears to operate to the benefit of Trump Organization. It may smoke out his tax returns and probe whether his team embraced Russian election meddling—and no more Republican-led committees indulging Trump’s “no puppet! You’re the puppet!” self-defence. Special counsel Robert Mueller’s report into potential collusion and obstruction of justice still hangs over the president; a de-Trumpified legislative body is bound to take seriously any damaging conclusions Mueller makes—to the point, potentially, of pursuing impeachment proceedings.

A Democratic House majority will swat away Trump’s push to further undo Obamacare, and his late-campaign boast that he would cut middle-class taxes by 10 per cent (deficit? what deficit?!) has zero chance of passing. A no-nonsense Trump is surely a fantasy, but how about a less-nonsense Trump? According to one financial analyst, an opposition-held House could cow Trump into backing off his sabre-rattling against the Federal Reserve chairman over interest rate hikes. And the national vote cast against the president’s party—and in favour of a yoke on his rule—might also embolden world leaders like Justin Trudeau, Emmanuel Macron and Theresa May to worry less about criticizing or defying the U.S. president.

RELATED: On a night of firsts, the Democrats take the House—but Republicans keep the Senate

There is risk, of course, in reading too much into Tuesday’s outcome. In 2010, Republicans parlayed a surge of disappointment in a new president (and a still-sputtering economy) into massive gains against the Obama-led Democrats—63 extra House seats, enough to flip control. In 1982, early misgivings about first-term leader Ronald Reagan led to deep losses for his party in Congress, and the Democrats padded their decades-old House majority. Yet in both cases, the sitting president won easily two years later—Reagan only lost a single state in 1984. After Obama’s first midterm setback, the Republicans took glee in opposing him every chance they could; in 2012 he trounced Mitt Romney and the GOP suffered losses in both the Senate and House. Lessons for Democrats from here to 2020: (1) don’t overplay your hand by resisting indiscriminately and racing toward impeachment proceedings—no matter how much your base enjoys it, and (2) pick a better presidential candidate than Mitt Romney.

The Senate stayed with the Party of Trump; it had only to hold nine seats while the Democrats were trying to hang on in 26 incumbent contests, many of which were in conservative-friendly states where Republicans snatched victory, like in North Dakota and Indiana. The current majority rubber-stamped Supreme Court Justice Brett Kavanaugh, but he’s the sort of judge any conservative president might have chosen, and bending the high court toward their side is Republican senators’ jam. Some of the newcomers, like Tennessee’s Marsha Blackburn, benefitted from Trump’s steady praise and will feel loyal. But Senators,, having to face re-election only every six years instead of the House’s two-year cycles, tend to be more independent than their counterparts; some had refused to join the seal-clapping chorus for Trump, and a few may continue to do so. Also in the rookie class is former presidential candidate Mitt Romney, a leading Republican never-Trumper.

So look for Trump to relentlessly demonize his powerful new foes on Capitol Hill. He was already maneuvering to absolve himself of blame for Republican losses on Tuesday; he’ll now try to pin any legislative and economic setbacks on House Democrats. And as the political constraints tighten, he will shed the human fetters within his own team. There’s wide expectation that many top cabinet members will go in coming weeks, like Defense Secretary James Mattis, Homeland Security Secretary Kirstjen Nielsen, and Attorney General Jeff Sessions. Such changes are expected at every president’s halfway point. But those sorts of departures, followed by replacements more attuned to Trump’s wishes, would give him freer rein to wield the military and weaponize the immigration system according to his political whim. Or to redirect the scrutiny of the Department of Justice away from him and toward his enemies. Expect a Trump who can no longer win legislatively to rely ever more heavily on executive orders; even before this election, he had claimed (albeit dubiously) he could, by presidential fiat, end the constitutional right of birthright citizenship.

It is true this wasn’t the massive “blue wave” some pundits had predicted. Still, the loss of the House, several state governorships and a marked increase in the Democratic popular vote all send a clear message that he’s acting without the American public resolutely behind him. He might fail to internalize the result, but the countervailing political forces around him won’t.

And no matter how much Trump seeks to curtail immigration and demonize Hispanics, in the future his overwhelmingly white base looks smaller and smaller. Demographically, the country will continue to grow more diverse; and Democrats increasingly are the party of that multicultural and non-traditional tomorrow. Tuesday marked the first two Muslim female House members, first two Native American women in Congress, and first openly gay state governor. All are Democrats.

Perhaps the most important message American voters sent Tuesday is that a significant plurality of them remain repelled by xenophobia, bluster, shameless lying and a reckless shredding of convention and decency. To much of the world, Trump’s 2016 victory felt grotesque. One is more inclined to forgive a republic for electing a conspiracy-minded demagogue if its populace, having seen the shambolic outcome, takes corrective action the next chance it gets. On Tuesday, Americans responded with electoral revulsion, and for the rest of us their response offers a measure of hope.

The opposite result—GOP retaining both houses of Congress—would have sent a dismaying message: that overt racism and ridiculous political fabrications (our opponents will give free cars to asylum seekers!) have found favour twice in a row. Or, alternatively: that such garbage warrants no rebuke as long as the U.S. economy is humming. Yes, some Republicans sought to create distance from Trump. But many pushed their chips into the president’s pile.

Some got rewarded for riding his gilded coattails. But in most of the country, his brand proved weak. And a Democrat House will make him weaker.