As Canada's Parliament prepares to vote on expanding military involvement against the Islamic State, US looks ahead 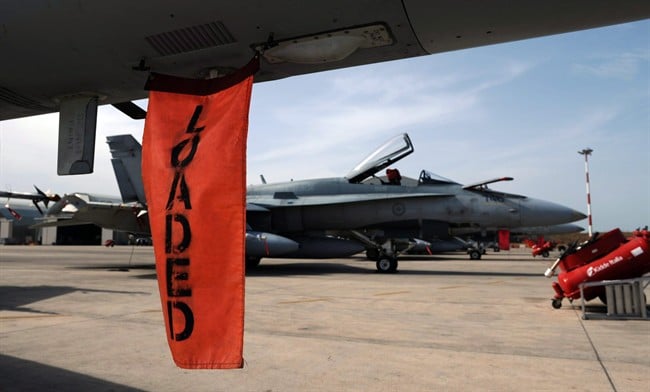 A CF-18 sits ready for flight at Camp Fortin on in Trapani, Italy, on September 1, 2011. As Canada’s Parliament prepares to vote this week on extending the military mission in the Middle East, the U.S. political system has already moved on to the next difficult conversation — about civilian casualties. (Sean Kilpatrick/The Canadian Press)

WASHINGTON – As Canada’s Parliament prepares to vote this week on expanding military involvement in the Middle East, the U.S. political system has already moved on to the next difficult conversation — about civilian casualties.

Multiple anecdotes about deaths during coalition airstrikes in Syria and Iraq have forced the White House to address the possibility that its mission might produce unintended casualties.

It has already stated that this conflict doesn’t fall under guidelines on civilian casualties established last year for drone strikes. President Barack Obama announced in May 2013 that he’d be haunted by civilian deaths for the rest of his life, and would no longer authorize drone strikes unless there was “near-certainty” no civilians would be killed.

But this mission is different, says the White House. It describes the coalition air-force attacks as part of an active hostility — a clear distinction from the May 2013 presidential statement on drones.

The administration doesn’t deny the possibility that civilians might recently have been killed by coalition airstrikes. It hasn’t, on the other hand, confirmed the reports gathered by non-government organizations.

“We do take extreme caution and care in the conduct of these missions. But there’s risk in any military operation,” Pentagon Press Secretary Rear Admiral John Kirby told a Defence Department briefing last week.

“There’s a special kind of risk when you do air operations. We’re cognizant of that and we’re going to keep working at it.”

Clearly, any casualties inflicted by international airstrikes represent an infinitesimal fraction of the total deaths in the Iraq-Syria conflicts, before coalition armies got involved. UN estimates put the number of dead in Syria’s civil war at more than 191,000, and in Iraq more than 24,000 civilians dead or injured in the first eight months of 2014.

ISIL executed more than 1,500 members of the Iraqi security forces in one incident alone, in June, the UN says. Millions more have been displaced in both countries.

Still, American allies in the Syrian opposition have begun to voice a new concern — that perhaps some aspects of this international military response might be counter-productive.

In one example, Syrian rebel commanders reportedly told U.S. lawmakers late last month during a briefing session, about women and children being hauled from the rubble after an errant cruise missile destroyed a home for displaced civilians.

American investigative journalist Michael Isikoff quoted one politician affiliated with the Free Syria Army who attended the meeting, and said: “We believe this was a big mistake,” referring to the cruise missile strike.

There are Youtube videos showing showing child victims of airstrikes. Some anti-American protests have been reported in different parts of Syria. And members of the moderate Syrian opposition have been quoted expressing concern that international airstrikes were stirring local anger toward them.

The Human Rights Watch organization says it has testimony from three area residents that missiles killed at least two men, two women, and five children in the village of Kafr Deryan, Syria, on the morning of Sept. 23.

Online videos showed remnants of American-style Tomahawk cruise missiles at the site. The organization asked the U.S. government to investigate those strikes, against two homes in the village.

It said its sources insisted there were no militant buildings, checkpoints, or vehicles anywhere near the village. However, one of those sources did say that the two men killed were members of the Jabhat al-Nusra group.

The group also reported that airstrikes killed at least 31 civilians — including 24 children — in an Iraqi school being used to house displaced tribesmen. Human Rights Watch said the Iraqi government told it on Sept. 13 that one of its pilots had targeted a nearby car believed to be transporting ISIL fighters and the car, packed with explosives, caused a far larger explosion than expected.

In the face of such tragedy, some of Obama’s domestic critics are responding with a hint of schadenfreude.

They’ve used these civilian deaths to scold the president — over Israel.

Some of his more hawkish critics suggest that, after admonishing Israel over civilian deaths in Gaza, he’s now been taught a lesson. This past summer, the Obama administration repeatedly urged restraint in bombing high-population areas that housed Hamas; it even declared itself “appalled” by the shelling of a school.

In one example, the Wall Street Journal ran a column this week titled, “The Education of a Wartime President.” Its author, law professor Alan Dershowitz, said countries can’t be held to traditional military standards when they’re fighting terrorists who hide in civilian populations.

“The decision of the Obama administration to abandon its unrealistic ‘highest standard’ pledge indicates the urgent need to revisit anachronistic rules with which no nation can actually comply, but against which only one nation — Israel — is repeatedly judged,” he wrote.

In another told-ya-so type column, a Washington Post critic rubbed the administration’s words in its face.

In a piece titled, “White House ‘appalled’ no more by civilian casualties,” Jennifer Rubin concluded: “Imagine if Israel had conducted bombing raid after bombing raid resulting in civilian casualties rather than send in ground troops at great risk to them in order to strike with precision. I’m sure the Obama administration would have been appalled.”