There have been days of mayhem in Marseille, involving English, French and Russian fans 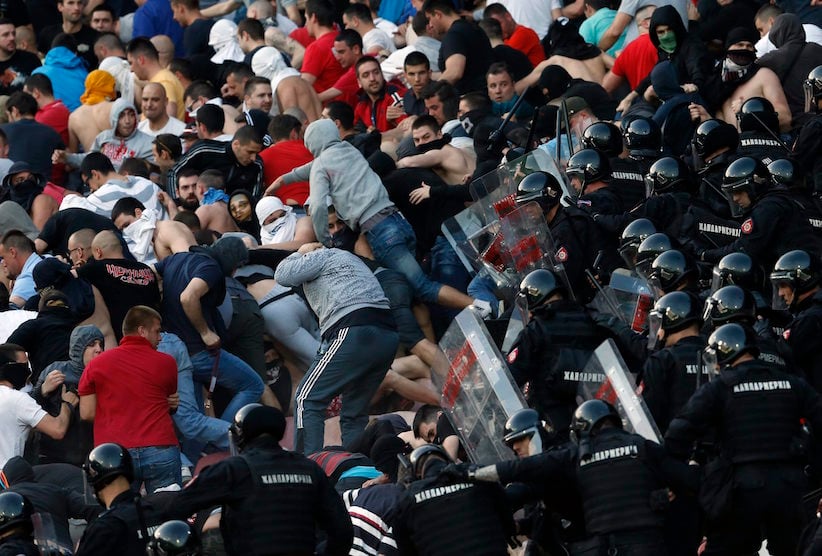 FILE – In this Saturday, April 16, 2016 file photo, Serbian riot police officers clash with Red Star soccer fans during a Serbian National soccer league match between Red Star and Partizan, in Belgrade. Hooliganism is making a comeback, and the timing could be bad with four high-risk matches in the first week of the European Championship in a country where the police force is already under huge strain. (AP Photo/Darko Vojinovic, File)

PARIS — Football hooliganism has been making a comeback at the European Championship and is challenging French authorities who have struggled to deal with the sudden surge in violence.

England and Russia were threatened with expulsion from Euro 2016 by UEFA on Sunday if there is further violence from their fans during the tournament. Clashes between English and Russian hooligans escalated over three days in the centre of Marseille before vicious fighting spread to the stadium on Saturday.

Hooliganism that tarnished English soccer in the 1970s, 80s and 90s has been largely eradicated from domestic matches. Arrest figures at English matches have dramatically declined through the 21st century. There were few problems from England fans at the 2006 World Cup in Germany, the 2010 tournament in South Africa or Euro 2012, which was hosted by Poland and Ukraine.

UEFA acknowledged there were “segregation issues” at the Stade Velodrome where Russia and England drew 1-1 and said it “will implement corrective measures to strengthen the deployment of security personnel at stadiums, in close collaboration with local authorities.”

Russia, which hosts the World Cup in two years, is already facing UEFA sanctions after its fans were deemed to have orchestrated disorder inside the stadium. English fans behind one of the goals were attacked after the game as stewards failed to keep the rivals apart.

UEFA expressed its “utter disgust” about the running battles involving the English, Russians and locals that started Thursday in the centre of the Mediterranean port city. Russia has been charged by UEFA over crowd disturbances, racist behaviour by fans and the setting off of fireworks at the game. UEFA’s disciplinary body will judge the case on Tuesday.

Further rampages by Russian and English fans when they move to northern France for their next games could see one or both teams thrown out of the tournament.

After an emergency meeting on Sunday, the UEFA executive committee “warned both football associations that — irrespective of any decisions taken by the independent disciplinary bodies relating to incidents inside the stadium — it will not hesitate to impose additional sanctions on the Football Association and the Russian Football Union, including the potential disqualification of their respective teams from the tournament, should such violence occur again.”

Euro 2016 disturbances haven’t been restricted to Marseille, with clashes also erupting along the Mediterranean coast in Nice after trouble involving fans from Poland and Northern Ireland. At least 44 people were wounded in the clashes in Marseille and Nice, authorities said,

The location of Russia’s next fixture poses another challenge for authorities as Lille is 30 kilometres from tiny Lens, where England plays Wales on Thursday.

Lille also has a direct rail link to London so there could be a large number of fans from all four Group B nations converging on the city.

“We suppose that we will have a lot of agitation in Lille” on Wednesday and Thursday, said local official Philippe Malizard.

“The difficulty now is that everywhere England goes in France there will be expectations of violence and that will feed into a hostile environment around England fans which exacerbates the violence,” said Prof. Clifford Stott, an expert in hooliganism who said he advises British police.

Stott, of England’s Keele University, said tactics deployed by Marseille authorities were “escalatory,” claiming that early intervention on Thursday could have quickly quelled the disorder. Tear gas was fired at the first sight of mass disorder and water cannon were later deployed.

Exacerbating the problems for UEFA is the fact the locations for matches in each group are selected before the random draw to pick out the four teams. That means the 35,000-capacity Lens stadium hosts the British derby rather than, for example, the Lyon stadium with 59,000 seats.

A person with knowledge of the situation told The Associated Press that UEFA will look to implement changes to allow them to select venues after the championship draw or switch locations based on team size or safety considerations. The person spoke on condition of anonymity because UEFA is yet to change its regulations.

Had such flexibility been permitted for Euro 2016, UEFA could have ensured England did not return to Marseille 18 years after its fans were involved in street battles there at the 1998 World Cup.