UK Conservatives line up to be next PM; Labour in 'shambles' 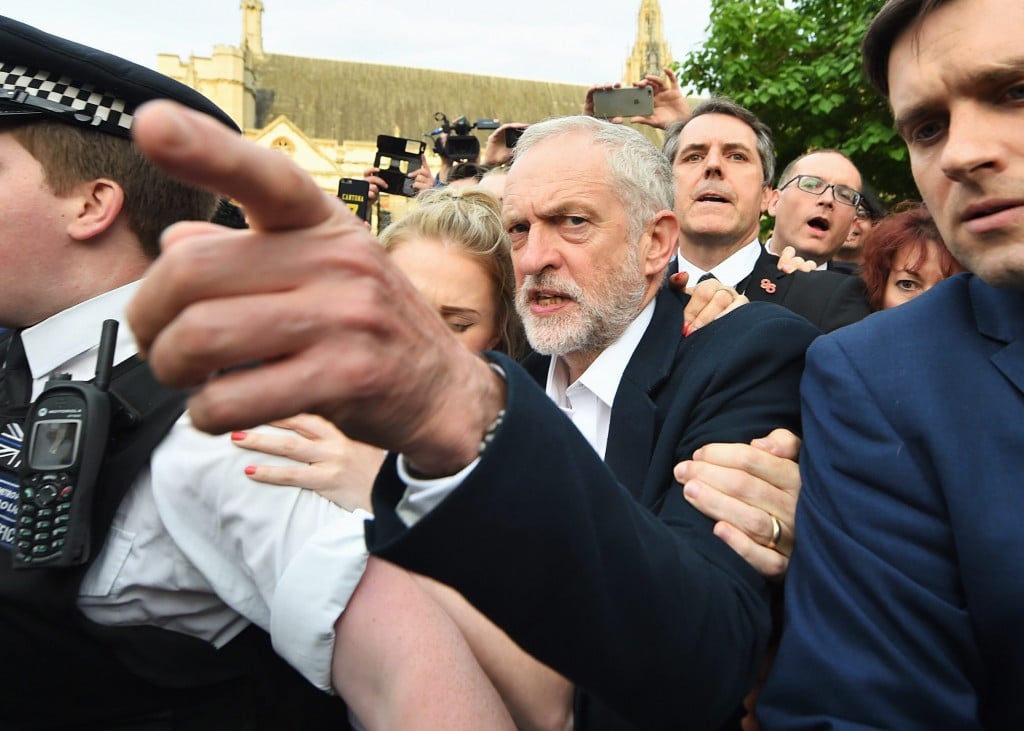 Labour leader Jeremy Corbyn arrives to speak in Parliament Square, where the Momentum campaign group are holding a “Keep Corbyn” demonstration, Monday June 27, 2016. Corbyn is likely to face a challenge for his position after losing 20 members from his top team and a raft of junior frontbenchers over the last 24 hours as months of frustration exploded into a full-blown rebellion. (Dominic Lipinski/PA via AP)

LONDON – Britain has not yet quit the European Union, but it has already left politics-as-usual far behind.

Conservative Party contenders began to emerge Wednesday to replace Prime Minister David Cameron in the wake of Britain’s vote to leave the bloc, while the head of the opposition Labour Party tried to cling to power in the face of a growing rebellion in party ranks.

Cameron announced his resignation after British voters decided last week, against his advice, that the U.K. should leave the 28-nation EU. His successor will get the challenge – or the poisoned chalice – of becoming the country’s next leader and negotiating Britain’s exit.

Conservative lawmakers have until noon Thursday to announce their candidacy.

The first contender to make it official was Work and Pensions Secretary Stephen Crabb, who said he was running because “I don’t see anybody who provides a compelling answer” to the question of how to heal a deeply divided nation.

The 43-year-old Crabb, raised by a single mother in public housing, said he would offer “resilience, optimism, humility, strength.” Although he backed the “remain” side in the referendum, he promised to deliver a “negotiated exit” from the EU.

Crabb is running with Business Secretary Sajid Javid – who would serve as his finance minister – on what has been dubbed a blue-collar ticket. Both men come from working-class backgrounds, in contrast to upper-crust front-runner Boris Johnson, the former mayor of London, and the current prime minister, Cameron.

Johnson, who led the “leave” side in the referendum, has the support of several senior Tory lawmakers. Environment Secretary Liz Truss wrote that she was backing the 52-year-old Johnson because the new leader must be “someone who believes in, and campaigned for, leaving the EU.”

Home Secretary Theresa May, who backed the “remain” side but is seen as competent and experienced, is also expected to run. May, 59, could appeal to a large chunk of Conservatives who mistrust the flamboyant, Latin-spouting Johnson, who has been accused of using the referendum as a platform for his leadership ambitions and of failing to draw up plans for what to do if his “leave” side did win.

Former Defence Secretary Liam Fox said he would formally announce his candidacy on Thursday. Fox, on the anti-EU wing of the party, had to resign from the government in 2011 after allowing a friend access to official meetings and overseas visits.

After nominations close, Conservative lawmakers will vote and whittle down the candidates to two. Those names will be put to a postal vote of all party members, with the result announced Sept. 9.

The opposition Labour Party is also in turmoil at the top, with leader Jeremy Corbyn resisting intense pressure to resign. Many Labour supporters accuse him of failing to make a strong enough case to voters for why Britain should remain in the EU.

Labour lawmakers in Parliament passed a no-confidence vote 172-40 against Corbyn on Tuesday _ but he says he will not resign because he has the support of grass-roots party members.

A chorus of anti-Corbyn statements poured out Wednesday from Labour lawmakers fearful that their party will be wiped out if the new Conservative leader calls a quick election while the staunchly socialist, doggedly uncharismatic Corbyn is at the helm.

Ex-Labour Cabinet minister Tessa Jowell declared the party was in “a complete shambles,” while a former interim leader of the party, Harriet Harman, said Corbyn “has no right or mandate to stay in office despite his failure and take the party down with him.”

The imminent departure of Cameron and the rebellion against Corbyn gave a surreal tone Wednesday to the normally raucous Prime Minister’s Questions session in the House of Commons.

Labour Party lawmakers declined to cheer Corbyn and sat in stony silence as he quizzed Cameron on the economic implications of a British exit from the EU – or Brexit, as it is known. Cameron, for his part, said it was not in the nation’s best interests for Corbyn to keep his job.