'There isn’t a spot on my body that hasn’t been beaten,' protester says of ordeal 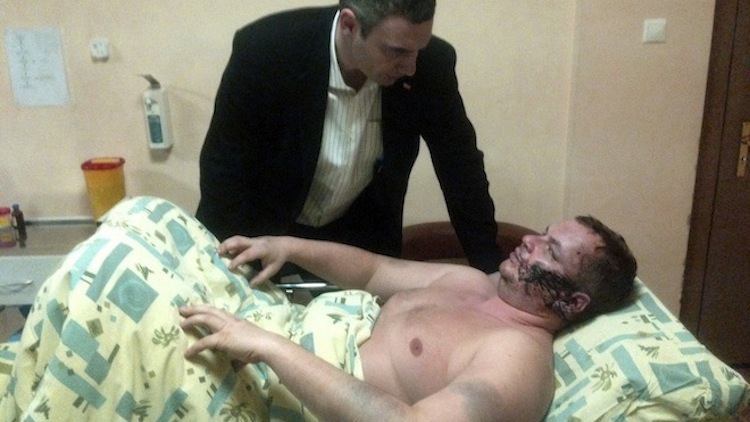 KYIV — Dmytro Bulatov, 35, went missing in Kyiv on January 22. A week and a day later, the anti-government protester was found. Badly beaten, his face is marbled with bruises. He has deep wounds in each hand.

“They crucified me, they nailed down my hands,” he told Ukrainian television on Friday morning. “They cut off my ear, they cut my face. There isn’t a spot on my body that hasn’t been beaten.”

Sergey Poyarkov, who works with Bulatov to plan demonstrations, told Maclean’s the unknown captors demanded to know who was financing their activism. “They can’t understand that it’s nobody. There is no party, no organization behind us …We started from nothing.”

Bulatov and Poyarkov are founders of “Automaidan”—a spinoff of “Euromaidan,” the mass anti-government protest movement that broke out in Kyiv in November.

Automaidan began, effectively, as a roaming protest-on-wheels. Motorists arrive in a convoy at the homes of government officials — including President Viktor Yanukovych. “Glory to Ukraine,” they cry. “Gang out!” Sometimes the protesters throw eggs.

Automaidan set up a hotline to mobilize car owners —there are thousands, Poyarkov says— who deliver supplies to demonstrators, guard the square, provide lifts to Kyiv and “drive around, seeing what authorities are doing.”

Poyarkov says his goal is to turn government into “a mere laughing stock.” The government has responded with legal and physical force. In mid-January parliament passed laws, one of which bans motorists from convoys of more than five. (There are stories of nervous Ukrainians attending funerals on foot.)

Bulatov was found January 30 near Boryspil, a Kyiv suburb. He told journalists he’d been tortured and interrogated for more than a week before he was dumped alone in the countryside. He’d been missing since January 22 when police ambushed an Automaidan motorcade in Kyiv.

On Friday evening, a tussle broke out at the hospital where Bulatov is being treated. Police were barred from questioning the activist. Opposition party deputies have vowed to remain by Bulatov’s bedside.

European Union foreign policy chief Catherine Ashton has said she was “appalled by the obvious signs of prolonged torture and cruel treatment.”

President Yanukovych was not available to comment on the abuse. On Thursday, the 63-year-old leader announced he was ill with “respiratory illness and high fever” and was taking a sick leave.