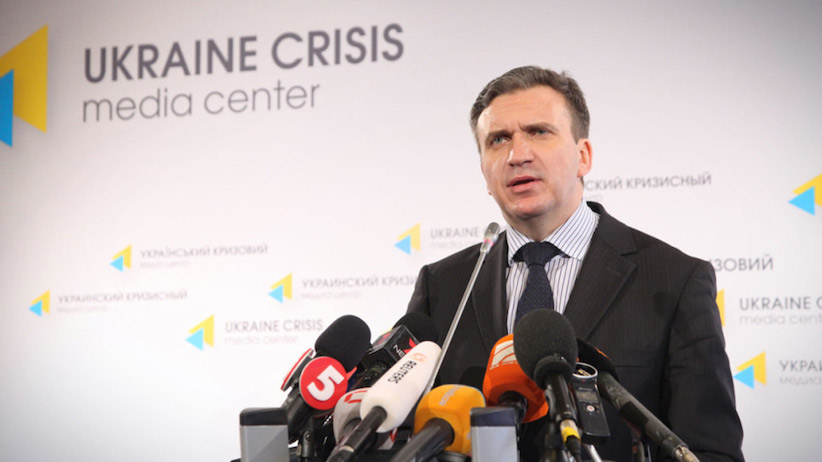 Pavlo Sheremeta, Ukraine’s new minister of economic development and trade, has what may be the hardest job in the country — fixing its wrecked economy. American-educated, with a shining résumé but no political experience, Sheremeta has previously advised the Malaysian government on economic reform and, until last month, was president of the Kyiv School of Economics.

Q: How did you get this job?

A: There was a phone call from [interim Prime Minister Arseniy Yatsenyuk].He said, “The treasury is virtually empty. We have the support of the West, but we need to go there and convince them that we’ll do the necessary reforms. Will you help me to generate the funds?”

I couldn’t say no. In my office I put up the portrait of 100 people who lost their lives here, in these streets. If they sacrifice their lives for this country, what is it for me to give up four or five months of my free evenings?

Q: How would you describe Ukraine’s economy?

A: To put in mildly, misdeveloped. To put it in a more true sense, completely robbed.

If you do simple normal things, you can create a breakthrough. The new deputy prime minister in charge of regional policy [Volodymyr Groysman] was the mayor of Vinnytsia. On a study tour going to Vinnytsia, one of my students asked the mayor: “How come the roads in the rest of the country are so spoiled and the roads in your city are reasonably good?” His answer was very simple. He said, “You just don’t steal.”

There are three parts of the story in the Economy Ministry. Stop stealing is number one. The second one is pretty close to that. Half of the economy is in shadows. So by economic stimulation and motivation—not by administrative actions, because that would be futile—you can bring half the economy back into light. It basically doubles your GDP per capita.

The third part of the story becomes the most difficult one. That’s getting out of the middle-income trap. That’s the economic phenomenon that happens when a country reaches a GDP per capita of four to ten thousand dollars. You’re too expensive to compete with China. And yet your capital base, your technology and infrastructure, are not as good as California. You’re basically stuck.

Q: How does the economic development of Poland and Ukraine compare over the last couple of decades.

A: I think GDP per capita in Poland is three or four times higher than in Ukraine, although they started from the same place in 1991. Poland’s resolute desire to join the European Union made them quite determined to implement reforms, painful reforms. That’s why they called it shock therapy. In Ukraine it’s shock without therapy for 20 years.

Q: What reforms are needed in Ukraine?

Let me give you an example. Ukraine happily subsides gas. Who uses more gas? Families that have bigger houses. Who has bigger houses? Rich people. So basically we’re subsidizing rich people. Trying to bring common sense to that policy probably will earn lots of enemies. But the country still needs to do that.

Let me give you another example: small and middle businesses. The share of small and medium businesses in Poland is at least a third, maybe half. In Ukraine it’s a maybe a tenth. It’s one of the main engines of economic growth, and it’s just absent. Why is that the case? The doctrine that we’ve had for quite a number of years was the idea of huge companies that employ a lot of people. That’s all nice if China buys your metal. If something happens to China’s growth, as happened last year, then a lot of people become unemployed. And there’s no absorbent that would take these people back into the economy. That would normally be small businesses.

At my first meeting at the Economy Ministry, I told them to please forget the words “permission system.” That’s the term used for the registration of small businesses—as if we permit businesses to operate. And you should have seen the eyes of the government officials. They were taken aback. So it’s a mentality change.

Q: How much goodwill will the public have for this government when it enacts painful reforms?

A: Of course we need to talk about some compensators. For those people who want to do business in the country, it has to be much easier—easier to register it, easier to run. Hopefully the interest rates will go down, so it will be easier to finance. Hopefully there will be no need to spend so much time and energy to protect it. Lots of businesses were just raided. The judicial system did not protect them at all. So if Ukrainians will feel more secure and safer doing business, that should be quite an achievement.

Q: How will Ukraine’s relationships with Europe and with Russia affect its economy?

A: Neither the EU nor Russia wants to find major instability on their borders, for obvious reasons. It creates lots of refugees into their countries. When I was in the Kyiv School of Econmics, I spent a lot of time in Russia. I teach in Russia. I have a lot of friends there. And it is so easy to find a common language. If we concentrate on the topics that unite us, we can build a reasonably good dialogue. Then we can deal with the issues that divide us. The formula I would use I think comes from Immanuel Kant — that we just have to deal with each other with respect. What is respect? The sovereign right of the other party to have a different opinion. They don’t need to like us, but we should try to find this basis for respect.

Q: Do you have a grace period before people lose patience?

Q: What do you need to deliver?

A: Make the country manageable. Make the streets safe. Create the conditions for economic growth. If we can achieve at least one or two per cent growth, it’s not dramatic, but it’s dramatically better than it used to be. Keep the safety net that citizens have at the moment, especially for the needy, elderly, disabled, people with a lot of kids.

Q: You’ve been appointed on an interim basis. Will you eventually run for office?

(This interview has been edited and condensed.)