In a Facebook posting, Poroshenko insisted that he hasn't managed his assets since taking the office 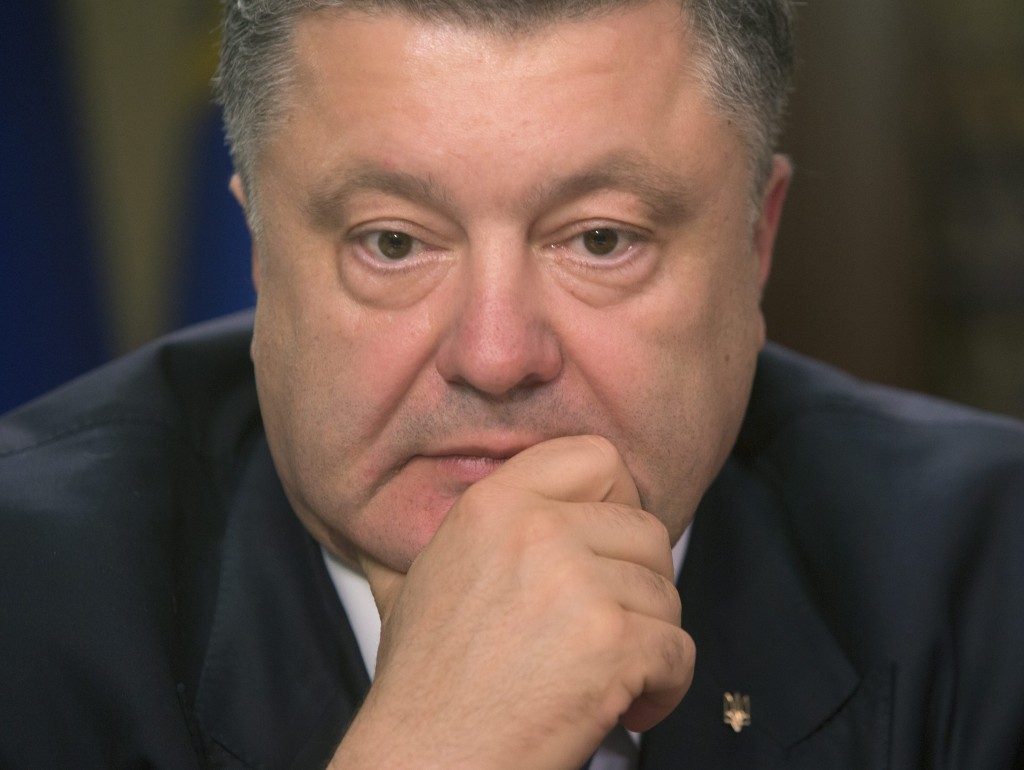 FILE – In this Monday, July 13, 2015 file photo, Ukrainian President Petro Poroshenko during an interview in Kiev, Ukraine. Ukraines President Petro Poroshenko has found himself amid a perfect political storm over the leaked documents from a Panamanian firm pointing at his offshore assets, with some of his political adversaries calling for his removal from office. Poroshenko insisted Monday, April 4, 2016 that he has done nothing wrong and hasnt managed his assets since being elected. (AP Photo/Efrem Lukatsky, file)

KIEV, Ukraine – Ukraine’s President Petro Poroshenko found himself in a political storm Monday after leaked documents from a Panamanian firm pointed to his offshore assets, with some adversaries calling for his removal from office.

Poroshenko, a candy magnate who won election in 2014, insisted Monday he has done nothing wrong and hasn’t managed his assets since being elected.

But Oleh Lyashko, leader of the Radical Party, said Monday the trove of data on offshore financial dealings revealed by an international media consortium has implicated Poroshenko in alleged abuse of office and tax evasion.

Poroshenko promised voters he would sell his candy business, Roshen, when he ran for office. But documents from the Panamanian law firm Mossack Fonseca indicated that instead he set up an offshore holding company to move his business to the British Virgin Islands, possibly saving millions of dollars in Ukrainian taxes.

Lyashko urged lawmakers to initiate impeachment proceedings against the president. Poroshenko, whose faction has 136 seats in the 450-seat parliament, appears protected from the motion, which requires a three-quarter majority to pass, but the scandal stands to hurt him politically.

In a Facebook posting, Poroshenko insisted that he hasn’t managed his assets since taking the office.

“I believe I might be the first top office official in Ukraine who treats declaring of assets, paying taxes and conflict of interest issues profoundly and seriously, in full compliance with the Ukrainian and international private law,” he said. “Having become a President, I am not participating in management of my assets, having delegated this responsibility to the respective consulting and law firms. I expect that they will provide all necessary details to the Ukrainian and international media.”

Poroshenko’s advisers have insisted the offshore business was part of corporate restructuring intended to facilitate the eventual sale of Roshen assets.

But Poroshenko’s critics scoffed at the argument, saying the revelations meant the president was withholding his taxes from the state coffers at a time when the Ukrainian economy is in tailspin and the nation is in a tug-of-war with Russia.

The news about Poroshenko’s alleged offshore business came even as his government has campaigned against the use of offshores.

“They should stop imitating the fight against corruption. Poroshenko must step down,” said Lyashko, whose faction has 21 seats in the Verkhovna Rada, the country’s national parliament.

The scandal has flared up amid bitter political infighting between Poroshenko’s bloc and the party of Prime Minister Arseniy Yatsenyuk, which has raged for months and involved mutual accusations of corruption. The spats have strained public patience and eroded the confidence of the West.

Some of Poroshenko’s allies backed calls for setting up a parliamentary commission to investigate the allegations.

Mustafa Nayyem, a prominent journalist who is a member of Poroshenko’s bloc in parliament, said while the Panama papers don’t give any grounds for impeaching the president it was necessary to launch a parliamentary inquiry.

“It’s impossible to extinguish that fire by silence or vague excuses,” he said.