Understanding the effects of a chemical attack

A doctor explains the devastating impact of a sarin-gas attack, and how to determine who was responsible 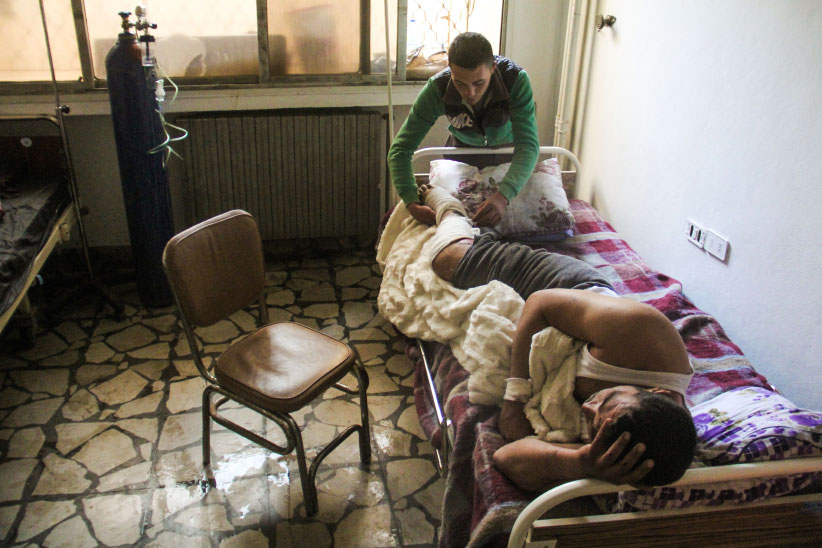 A picture taken on April 6, 2017 shows 40-year-old Hassan Youssef, a victim of the April 4, 2017 suspected toxic gas attack in Khan Sheikhun, receiving medical care in a hospital in the nearby northwestern Syrian city of Idlib. (Omar Haj Kadour/AFP/Getty Images)

“I don’t know if my family is dead or alive.”

Those words came from Maxin Yusif, a 13-year-old-boy who broke down in tears at the Reyhanli Hospital in southern Turkey near the Syrian border after a chemical attack in Idlib, Syria, last week.

There’s something inexplicable about seeing the faces of innocent children lying dead on the ground from a disaster. It shakes you to the core. I’ve seen the faces and mangled bodies of children during a humanitarian mission in the mountains of Pakistan in the aftermath of the 2005 earthquake, which occurred during school hours and claimed the lives of many. Houses were destroyed. Families were ripped apart. The innocent were killed.

Those faces will always haunt me.

Since then, the Syrian civil war has evolved from a complicated problem to a staggering geopolitical and global crisis, a Rubik’s cube with lots of moving parts. And to understand the horrific images we are seeing from the chemical attack in Idlib, we need to understand the biology and chemistry of chemical warfare.

MORE: Why Trump’s strikes on Syria are a good thing—and hardly enough

One of the suspected nerve agents used in Bashar al-Assad’s recent alleged chemical attack is believed to be sarin, a gas that was inadvertently discovered during experimentation with pesticides by the Nazis in the 1930s and turned into a possible weapon of mass destruction.

Here’s how it works: If your nervous system wanted to contract a muscle, it would fire off an electrical impulse along the nerve fibre. There are gaps or synapses in between these nerve circuits, where the electrical energy triggers the release of chemical neurotransmitters which travel across the gap to bind with receptors on the other end to complete the circuit. This specific neurotransmitter, acetylcholine, is then broken down by an enzyme, resetting the system. Think of that enzyme as a specific Pac-man, eating up the molecules of acetylcholine.

Nerve agents like sarin inhibit this enzyme from doing its job. As a result, the neurotransmitter accumulates at the synapse and constantly stimulates the other end.

In essence, there is overstimulation of the muscles and glands, causing the vomiting, diarrhea, and paralysis we see in the images on TV. Depending upon the exposure and dose, sarin can kill you in ten minutes. It can linger in clothes and effect the first responders unless they are covered from head to toe; gloves and a simple face mask usually do not protect you.

Indeed, in the aftermath of the attack, we saw many first responders unprotected as they dealt with victims. It doesn’t take much to affect them, too: a small drop of sarin in liquid form can cause increased secretions and muscle-twitching on contact.

In the aftermath of a chemical attack, patients have to be triaged, first responders have to be covered from head to toe, the airway has to be secured, secretions suctioned, the heart stabilized and an antidote—atropine—has to be administered. Sarin exposure can be detected with testing of the blood, urine and droplets in the hair.

What was the source of the attack? This is the critical question.

Sarin is a very corrosive agent; it has to be held in special containers that won’t break down easily. Mishandling these containers can cause serious fatalities.

There is also a binary version of sarin. Think of it like the two chemicals we used to mix in high school, baking soda and vinegar. Separately, they are innocuous. But mixed together, they cause a spectacular chemical reaction in our homemade clay volcanoes.

This binary version is less dangerous during storage and handling. It is mixed before an attack manually or though the mechanics of a bomb delivery device. If a bomb was dropped on a binary version of sarin, it would do very little damage as each component would be destroyed separately by the blast.

But a bomb detonating in close proximity to a container full of already mixed volatile sarin would incinerate it.

What if the blast was a little further away from the container? Could it have caused a breach and released this deadly sarin? Are there any concerns or danger in bombing suspected depots of volatile sarin on the ground?

In America’s retaliatory strike on Syrian airfields, precautions were apparently taken in avoiding suspected sites of sarin to minimize possible damage to civilians.

Sarin is a liquid at room temperature, similar to water. It evaporates easily, making it a class of chemical warfare agents called non-persistent, which means that it disperses quickly.

If it is dropped from the air, it has to be detonated at ground level so the resulting aerosol can have significant impact. If it goes off higher in the atmosphere, it disperses and is diluted, having little impact. Nerve agents other than sarin are detonated much higher above ground because of their persistent nature, meaning they stay in the territory causing longer damage.

The reason I mention this is that you generally won’t see sarin chemical bombs exploding and releasing gas high up in the air. In general, the more potent and pure versions of sarin are not mixed with other agents as it dilutes its effect.

It is also odourless. While eyewitness accounts are generally not completely reliable in the midst of overwhelming chaos, there have been reports of various odours, including a “bleach” smell during the attack, which suggests the possible presence of chlorine as well.

The world has become a very dangerous place with increased use of chemical weapons across the world with very bad actors on the stage. We are all vulnerable; there was even a sarin attack in a Tokyo subway in 1995. We need to build unity and understanding across the globe and work together so we can prevent these devastating disasters.

Dr. Pawan Grover is a graduate of the UMDNJ-Robert Wood Johnson Medical School (Rutgers Medical School). He did his residency at the Texas Medical Center and spine interventional fellowship with world-renowned specialist Professor Michael Cousins. He also has real world experience in disaster zones, particularly the Katrina disaster and in travelling to Southeast Asia in the aftermath of the earthquake in Pakistan. He has worked as a television medical correspondent with Fox News, CNN and more.