Trump claimed that 'humanity is better' thanks to him. In a body that sustains itself on problems it never solves, that's cause for nervous laughter 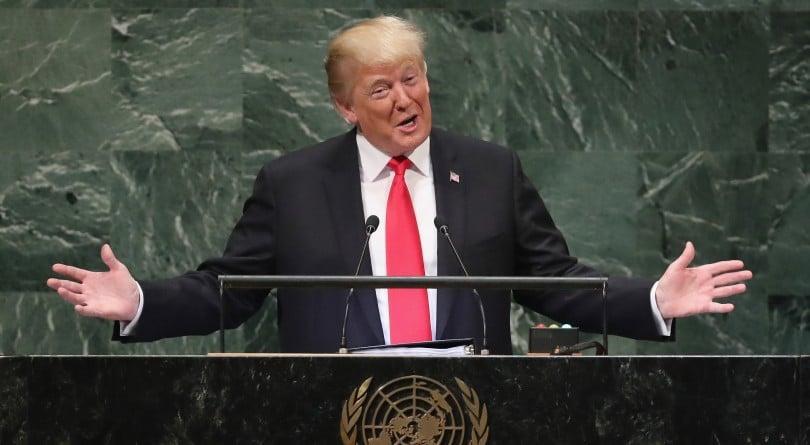 On one wall of the lobby that leads to the corridor that leads to the fabulous gold-walled home rink of the General Assembly of the United Nations, there is a gigantic tapestry entitled Chernobyl that was donated by the one-man Republic of Belarus in 1991.

The centre of the rug shows a lean, cubist dude who is wearing nothing but a white jockstrap and wings. At the male figure’s waist, for no obvious reason, is a handsome cock (relax—it is poultry), and he is surrounded by red-tongued snakes. Beside the man stands a woman holding an infant Christ with an apple in His tiny hand. Above the man’s head is an atomic nucleus that is emitting fire. There also is a weeping Jesus on the Cross, a grieving Madonna, St. George spearing the dragon, a pointy-beaked stork, some toothy fish, a bare-breasted nymph, and one smaller male figure who is exposing himself like a drunken undergrad at Yale.

Across the hall, behind a glass enclosure, is a gilded stupa that was donated by the governments of Sri Lanka, Burma, and Thailand in 2006 and that contains sacred relics of the Lord Buddha himself, the enlightened penitent who once observed that “Better than a thousand hollow words is one word that brings peace.”

At the United Nations on Tuesday morning, that one word was Trump.

A diversity of men in identical suits, and a palette of women from countries where men allow them to take part in such things, awaited the Buddha-bellied American sage. “Excellencies, distinguished heads of state and governments, ladies and gentlemen,” was how they were categorized, in that order, by the Secretary General. At the United Nations, a bureaucracy that, like all bureaucracies, exists to perpetuate itself—and where dictators and democrats alike sip from the same crystal flutes—no cushions are set aside for the labouring, the lowly and the less-than-excellent. Each September, when the General Assembly is in session here, a thousand of New York’s Finest and legions of gendarmes from every continent keep the real people of Manhattan a mile away.

RELATED: Unhinged Donald Trump no longer shocks, which is shocking

“Trust is at the breaking point,” António Guterres was saying to open the 73rd annual session of the great stupa of talk and ticket-free parking in its customary tenor of dystopian gloom. “People are losing faith in political establishments, and populism is on the march. Democratic principles are under siege … leaders of states push the boundaries …”

The fact that everything is coming up roses in many corners of this beautiful world never is mentioned when the Sec-Gen hits the stage. 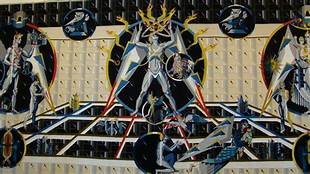 The tapestry ‘Chernobyl’ at the UN in New York (Photo: Allen Abel)

“Human rights in general is losing ground and totalitarianism is on the rise,” Guterres finger-wagged to the deputies of the very strongmen who, from Africa to Latin America, and from Belarus to Burma, steal those rights from their citizens with no fear of intervention by bluebloods in blue helmets. These merely shrugged and looked down at their duty-free phones with their unlimited data plans.

“If they don’t, The Donald promised, “we will have no choice but to totally destroy North Korea.”

Ah, but did not the Buddha say, “Work out your own salvation. Do not depend on others?” Thus in his enlightennment did Donald Trump pursue the Middle Path. And lo, before you know it, Rocket Man will be sleeping in the Lincoln Bedroom and taking breakfast in the State Dining Room in flannel pajamas and bunny slippers.

Still, at the General Assembly, the great peacemaker from Jamaica Estates, Queens was welcomed with one-handed applause, no longer a novelty to the world’s upper crust, merely a boor and a bore who converses only in English, English and English.

The atmosphere was muggy in the great amphitheatre. Trump himself seemed muted and drained, even after two nights —alone, the gossipers assume—in his own bed at Trump Tower.

To a Maclean’s correspondent in the balcony, the scene was reminiscent of Jon Stewart’s famous appearance on CNN’s Crossfire in 2004 when Tucker Carlson pleaded, ‘’Come on. Be funny.” And Stewart shot back, “No. No. I’m not going to be your monkey.”

At the UN, the legion of diplomats who see an ape in Donald Trump would fill the Delegates’ Dining Room twice over.

“I’m the only one who knows how to fix it.” Trump said in a campaign speech in 2016, back when not a single Excellency expected—and probably only Israel and Russia and the Taiwanese hoped—that he would perch in the Oval Office a few months later.

On Tuesday, when the American president began his speech by boasting of “Extraordinary progress … more than almost any administration in the history of our country” they laughed at him in the General Assembly, a self-conscious twittering at first, then building in volume and audacity, rippling around the hall.

“I didn’t expect that reaction, but that’s okay,” Trump smiled, handling the insult perfectly. Compared to what awaits him back in Washington—the accusations levelled against his Supreme Court nominee; the impending H-bomb of the Mueller report and the imminent canning of the deputy attorney general who wondered about secretly taping the president to determine if he is mentally ill—being mocked by noblemen from Moldova or Mauritius was hardly the end of the world.

When Donald Trump said that “we cannot allow Iran to possess a single nuclear warhead—just can’t do it,” not a single delegate clapped.

The rest of Trump’s speech enfolded his now-familiar themes:

“The United states will not tell you how to live or work or worship … Iran’s leaders sow chaos, death and destruction … all nations of the world should resist socialism and the misery that it brings …”

“Few give anything to us,” said Donald Trump. “We are only going to give foreign aid to those who respect us and, frankly, are our friends. We defend many of these nations for nothing and they are giving us high oil prices. Not good.”

At these words, the renewed laughter was nervous; what gall a man must have to speak like this to the General Assembly of the United Nations—“an international body,” in The Donald’s words, “unaccountable to our own citizens.”

RELATED: Was the road to a Donald Trump impeachment paved by Andrew Johnson?

He hailed India, Saudi Arabia, Israel and Poland, and invited all of the world’s peoples to “make their countries great again.”

He never mentioned Canada or Mexico.

“The whole world is richer, humanity is better,” said Donald Trump, in phrases rarely heard in this dark-aired room. Moments earlier, António Guterres had recalled enumerating seven challenges a year ago and sighed to Their Excellencies that “they remain sadly unresolved.” A prosperous and war-free world, of course, would put his cartel out of business.

“The United States will not be taken advantage of any longer,” said Donald Trump.

“Three things cannot be long hidden—the sun, the moon, and the truth,” said the Buddha.

“Did you laugh when Trump was speaking?” a Maclean’s reporter asked a delegate from Cameroon named Lidwine Meffo when the speech had ended.

“Yes,” she said. “Everyone did, when he listed all those things that he has done.”

“Why did you laugh?”

“Because it is true.”