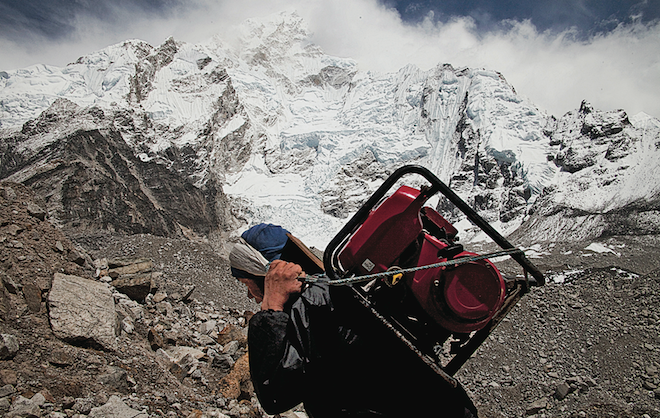 There are few firsts left to achieve on Mount Everest: more than 4,000 people have scaled the world’s highest peak, smashing everything from speed records to the greatest number of people to summit in a single day (176). But a group of antagonists found their way into the annals this week by engaging in the mountain’s first-ever brawl—that’s right, an old-time fist fight, some 7,000 m above sea level.

The scuffle broke out between a group of Sherpas and three European mountaineers climbing just below Camp 3 on the mountain’s southeast col route in Nepal, according to witnesses and government officials. The Sherpas had been assigned the annual task of fixing ropes, to which the scores of would-be summiteers waiting at base camp could attach themselves on their way up. The climbers—one each from Switzerland, Britain and Italy—reportedly disregarded the Sherpas’ request that they stay put while the ropes were being set. Instead, they tried to forge on upward, prompting the Sherpas to pelt their tents with rocks. Eventually, said witnesses, the two sides came to blows.

Tensions on the 8,850-m mountain are nothing new. Each year, hundreds gather at base camp, intent on satisfying lifelong dreams, and ego is in abundant supply. In recent years, traffic jams in the so-called “death zone” above 8,000 m has led to accusations of self-serving climbers costing lives. But physical altercations are rare, and rarer still are confrontations between visiting climbers and Sherpas, the Nepalese mountain people who provide guiding services to foreigners. Even Elizabeth Hawley, a historian who has been tracking Everest expeditions since the early 1960s, was taken aback, telling Reuters: “I have not heard of any such incident before.”