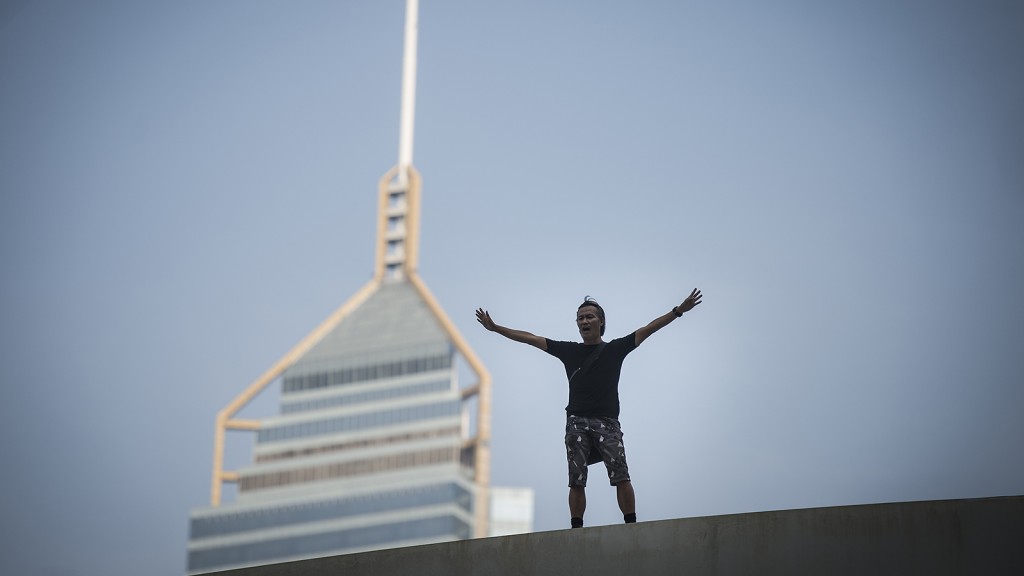 A man threatens to jump of a pedestrian walkway during a pro-democracy protest near the government headquarters buildings in Hong Kong, China on Sunday, Oct. 5, 2014. He demands that the pro-democracy protesters stop occupying the roads to allow his three children aged 7 to 14 to go to school. (Photo by Justin Chin)

The anti-protest protester took centre stage shortly after 1 p.m. Clambering first onto the roof of the pedestrian bridge that stretches across Harcourt Road, and then another three metres higher to the apex of one of its supporting spans, the fortysomething man—dressed in shorts and a black T-shirt with his sunglasses nestled in his greying hair—paced sure-footedly back and forth across the narrow beam, shouting his message down at the several thousand Hong Kong democracy activists occupying the 10 lanes of black-top below.

He said he has nothing against universal suffrage, but that the disruptions to daily life on the Island—now entering their second week—were simply too much to bear. He repeatedly mentioned his three children, aged between seven and 14, and how they had been shut out of school for a week. He claimed to be a movie director. He wanted the roads to be reopened. And he demanded to meet with the student leaders of the Occupy Central movement so they could hear his concerns.

If not, he said he would jump. And to prove his seriousness, he tossed his cellphone to the pavement three storeys below. It shattered.

Police, who have kept a low profile at the protests in the Admiralty district since they tear-gassed and pepper-sprayed demonstrators a week ago, were soon on the scene. So too were firefighters, who within minutes had placed a large inflatable cushion underneath the edge of the bridge. Negotiators arrived and climbed to the roof of the walkway, tethering themselves to its superstructure. The crowd, and the scads of media on hand to cover the Umbrella Revolution, settled in to watch.

The irony of one man hijacking the agenda of tens of thousands of dedicated disruptors was perhaps lost on the masses. A few of the people down below started to debate him. When the volunteer protest marshals tried to move them further back, they objected strenuously. “This is not a democracy,” screamed a man in a green T-shirt. “You’re using the same methods as the Chinese!”

As the hours ticked by, the crowd became restless. One man launched a small drone carrying a Go-Pro camera into the air and started flying it toward the would-be jumper. The police ran over and told him to stop. Off to one side, a small prayer group gathered around a white cross and launched into a spirited rendition of We Shall Overcome in Cantonese. The smell of fried chicken wafted down the block from a KFC outlet.

A tall Caucasian man with a beard walked up to the safety cordon and shouted, “You are very boring!” The director responded with a string of English expletives. “You come up here. I’m not leaving,” he screamed. “I just want my kids to go to school.” He paced across the beam toward the tents that CNN had set up for its broadcast position and swore some more. On the far side of the road, the prayer group struck up Onward, Christian Soldiers.

The negotiators inched out a little further onto the roof of the walkway. “Think of your wife and kids,” one pleaded in Cantonese. The firefighters inflated a second jump bag. Ambulance attendants stood at the ready with a stretcher and a backboard.

It was after 4 p.m. when the man requested a bottle of water and three bullhorns to better broadcast his concerns. Once they were in hand, he kept pressing the wrong buttons, setting off beeps and sirens. The negotiators made their way back out to provide a lesson on how to use them.

A rumour spread through the crowd that the jumper was really a stuntman, most likely being paid by anti-democracy forces. The evidence was said to be on his Facebook page, and could be seen in the confident way he walked the narrow span. Still, on a relatively uneventful afternoon, this was the only entertainment, and few were willing to turn away.

At 5:30 p.m., two-and-a-half hours past the deadline he had set for meeting with the student leaders, the man became agitated. He pulled a large orange boxcutter from his backpack and held it against his neck. He sat down on the beam and cradled his head in his hands. The negotiators came close, and spoke urgently.

Fifteen minutes later, crying, he threw the knife down to the pavement. The rescuers reached up. The man swung his legs around and knocked one of the bullhorns off the ledge. As it fell into the airbag with a thump, the crowd let out a collective “Ohhh!” He let himself be pulled to safety. Most of the onlookers broke into applause. The tall fellow, who had accused him of being boring, stood triumphantly waving a 100 Hong Kong dollar bill in the air.

A young man strode over to the media area and held out his cellphone. On it was a close-up picture of the man on the bridge, next to what appeared to be his image on an ID card. The inscription in Chinese said he was a member of the Hong Kong Stuntman Association.  His last name was Leung, same as the autonomous territory’s chief executive officer.

“Good show,” declared the young man, as he walked away. “Good show.”