US Weekly says the royal baby already has a nickname

'Our Little Grape,' and if it's a girl, 'Elizabeth Diana Carole' 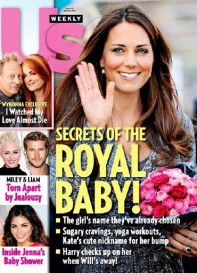 According to the latest cover of US Weekly, the duke and duchess of Cambridge have already chosen a girl’s name, Kate has a “cute nickname for her bump”, Kate has “sugary cravings” and does “yoga workouts” and “Harry checks up on her when Will’s away!”

The cover story reports that if Will and Kate have a daughter, they will name her Elizabeth Diana Carole, which pays homage to the Queen and both of the couple’s mothers. But so far, they’ve only told Prince Charles and Kate’s parents the royal heir’s gender. Not even Pippa knows.

If US Weekly’s sources are correct, then our prediction back in December that the name Elizabeth would be nixed by Will and Kate–on account of there having been two Queen Elizabeths in the last century and that the Belgians have recently snagged “Liz” for their future queen–would be, well, wrong.

And the nickname for Kate’s baby bump? “Our Little Grape.”