Venezuela collapses and nobody cares

Scott Gilmore on why Canada should do more for Venezuela 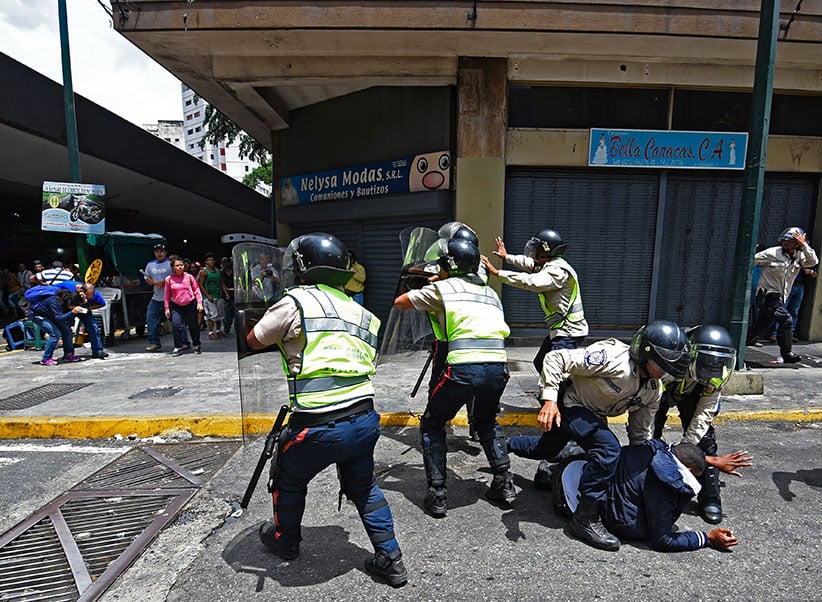 We like to think that progress is irreversible. We look at our roads and supermarkets and hospitals and while we know that everything could be better, we rarely worry it will all collapse. Unhappily, right now Venezuela is proving that all of this can suddenly disappear, and it’s frightening.

The country is falling apart, rapidly and completely. By many measures, it is one of the most blessed nations in the Americas. It has the largest proven oil reserves in the world, almost twice Canada’s. It has rich agricultural land, incredible biodiversity and huge amounts of mineral wealth. And yet its people are now starving; its infrastructure is in tatters; law and order have broken down. And strangely, Canada doesn’t appear to care.

In the late 1990s, after a string of corruption scandals, a disillusioned populace turned away from the two main traditional political parties and elected the populist demagogue Hugo Chávez. The ensuing “Bolivarian Revolution” completely rewired the Venezuelan constitution and economy.

Industries were nationalized. Price controls were implemented. Farmland was expropriated. The currency was devalued. As a result, not surprisingly, the economy completely collapsed. At the same time, its democratic institutions were also assaulted. Human rights abuses multiplied, elections were ﬁxed and political opponents were jailed. The slide into chaos continued after Chávez’s death in 2013 when his successor, Nicolás Maduro, doubled down on the same policies.

Now, drought has effectively shut off hydroelectric power. The drop in oil prices has decimated government revenues—it can no longer afford to keep its offices open for even three days a week. Unemployment is endemic. Hospitals have run out of medicine, equipment, even bed sheets. There are food riots in the streets, a state of emergency has been declared, and the military is being mobilized to prevent further rioting.

There is no indication that Maduro will back down and institute economic or political reforms. He continues to blame Venezuela’s troubles on either international conspiracies or his political opponents. Legislation passed by the opposition-controlled congress is either blocked by loyalists in the Maduro-appointed judiciary or simply ignored by the president and the bureaucracy.

And there’s not much anyone can do about it. One of the only successes of the Bolivarian Revolution was to insulate Caracas from outside pressure. The international community has few levers to pull that would force Maduro to moderate his political or economic abuses.

One man who has not given up hope is the secretary-general of the Organization of American States, Luis Almagro. The unwritten rules of leading multilateral organizations such as the OAS, the African Union or the United Nations is that you should smile a great deal, be polite to everyone and maybe issue the occasional anodyne press release about “consensus building”—just ask Ban Ki-moon.

Almagro, a former Uruguayan foreign minister, didn’t get that memo, and his tenure to date at the OAS has been an impressive display of muscular diplomacy. He has been a lonely champion for the Venezuelan people, willing to call out Maduro’s abuses and crimes. His open letters, which have included Bob Marley lyrics, are a pleasure to read (particularly for me, having once been an exceptionally ill-suited diplomat). In return, the Venezuelan strongman has railed furiously against the secretary-general, attacking him at protest rallies reminiscent of 1984’s “Two Minutes Hate.”

I spoke with Almagro about the crisis and shared my skepticism that the international community could cajole an increasingly defensive Maduro. The secretary-general was far more optimistic, and argued that the Inter-American Democratic Charter and the Inter-American Human Rights System could be used to help defuse the Venezuelan crisis by providing clear standards against which Caracas could not help but be measured. A senior diplomat of one of the member states of the OAS told me Almagro’s outspoken efforts had created space for other leaders to speak out more freely.

But, so far, no one is taking advantage of this. The United States has been mostly silent, as has Canada. You would think that the single biggest economic and political crisis in the western hemisphere would warrant at least a comment from Foreign Minister Stéphane Dion, but so far he has done little other than meet with a delegation of Venezuelan opposition members.

International relations almost always involve painful trade-offs, as we have seen in the case of the sale of LAVs to Saudi Arabia. Situations like Venezuela, where the right thing to do is so clear and requires so few sacrifices, are rare. Canada could be incredibly useful merely by speaking up about the human rights abuses, continuing to support the Inter-American Human Rights System, and increasing local programming to back democratic reform.

Canada is almost never as influential as the public thinks. We’re very good at lending a helping hand (unless of course that requires any actual military effort), but that’s usually about it. Venezuela provides a unique opportunity to play a more significant role. To say things other countries won’t, to do things that matter, to help Almagro fight the good fight. For the life of me, I don’t understand why we aren’t.

Scott Gilmore is married to Catherine McKenna, the minister of the environment.