Russia's pullback, timed to peace talks, will allow Putin to pose as a peacemaker and help ease tensions with Turkey 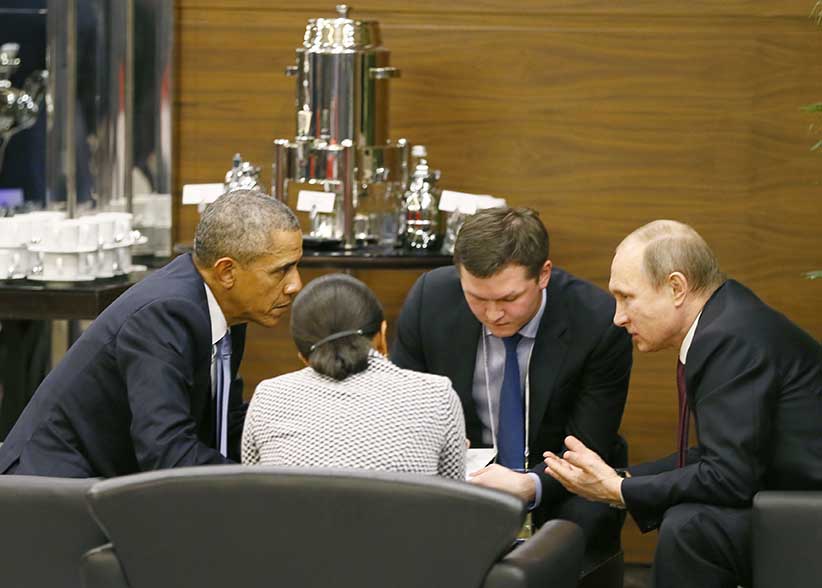 MOSCOW — President Vladimir Putin ordered the Russian military to withdraw most of its forces from Syria, timing his move to the launch of Syria peace talks Monday — an end game that allows the Russian leader to cash in on his gains and reduce his risks in the conflict.

The start of the negotiations in Geneva offers Putin an opportune moment to declare an official end to the 5 1/2-month Russian air campaign that has allowed Syrian President Bashar Assad’s army to win back some key ground and strengthen his positions ahead of the talks. With Russia’s main goals in Syria achieved, the pullback will allow Putin to pose as a peacemaker and help ease tensions with NATO member Turkey and the Gulf monarchies vexed by Moscow’s military action.

At the same time, Putin made it clear that Russia will maintain its air base and a naval facility in Syria and keep some troops there. Syria’s state news agency also quoted Assad as saying that the Russian military will draw down its air force contingent but won’t leave the country altogether.

Announcing his decision in a televised meeting with Russia’s foreign and defence ministries, Putin said the Russian air campaign has allowed Assad’s military to “radically” turn the tide of war and helped create conditions for peace talks.

“With the tasks set before the Defence Ministry and the military largely fulfilled, I’m ordering the Defence Minister to start the pullout of the main part of our group of forces from Syria, beginning tomorrow,” Putin said.

He didn’t specify how many planes and troops should be withdrawn. The number of Russian soldiers in Syria has not been revealed.

Related: How Russia used the Syrian conflict to reassert its global might

Russia has deployed more than 50 jets and helicopters to its Hemeimeem air base, in Syria’s coastal province of Latakia, and they have operated at a frenetic pace, each flying several combat sorties on an average day. Russian Defence Minister Sergei Shoigu reported to Putin that thanks to the Russian air support the Syrian military has extended its control to 400 towns and villages over an area of 10,000 square kilometres.

State TV quoted Assad as saying that the collaboration between Russian and Syrian forces has secured “victories against terrorism and returned security to the country.”

The U.N. special envoy for Syria, Staffan de Mistura, who restarted peace talks between the Syrian government and the opposition in Geneva on Monday, said he had no comment on Putin’s announcement when contacted by The Associated Press.

Earlier in the day, he warned that the only alternative to the negotiations is a return to war, and described political transition in the country as “the mother of all issues.”

The Russian- and U.S.-brokered cease-fire that began on Feb. 27 has largely held, but both the Syrian government and its foes have accused one another of violations. The deal with Washington has achieved a key Putin goal: raising Russia’s global profile to appear as an equal to the United States in mediating the Syrian conflict that has dominated global attention.

The Islamic State group and al-Qaida’s branch in Syria, the Nusra Front, are excluded from the cease-fire and Russia has said it would continue its fight against the groups considered terrorists by the United Nations.

Speaking at the United Nations, Russia’s U.N. ambassador Vitaly Churkin did not respond to questions on whether Russian airstrikes would end.

Putin’s announcement, however, appears to indicate that Moscow will largely halt its military action for now. The Russian air force already has drastically reduced its activities since the cease-fire started.

Putin said Monday’s move should help raise trust and serve as a stimulus for Syria’s political talks. The Kremlin said the president co-ordinated the move with Assad, who voiced his readiness to “quickly launch a political process.”

“I hope that today’s decision will send a good signal to all conflicting parties,” Putin said. “I hope it will significantly increase the level of trust among the participants in the Syrian settlement and contribute to settling the Syrian issue by peaceful means.”

Putin added that Russian troops will continue to oversee the observance of the cease-fire.

“If this step, this action will remove all Russian troops from Syria then it will be a positive step, I believe,” he said, adding that Putin should follow up on that “by saying he is standing beside the Syrian people, not beside the Syrian dictatorship.”

Moments before meeting with a Syrian government envoy in Geneva, de Mistura laid out both high stakes and low expectations for what is shaping up as the most promising initiative in years to end the conflict that moves into its sixth year on Tuesday. At least a quarter of a million people have been killed and half of Syria’s population has been displaced, flooding Europe with refugees.

The truce, however, has helped vastly reduce the bloodshed and allowed the recent resumption of humanitarian aid deliveries to thousands of Syrians in “besieged areas” — zones surrounded by fighters and generally cut off from the outside world.

De Mistura laid out a stark choice for Syrian parties in the talks, saying: “As far as I know, the only plan B available is return to war _ and to even worse war than we had so far.”

The two sides are deeply split on Assad’s future. His foreign minister, Walid al-Moallem, said Saturday that any talk of removing Assad during a transitional period sought by the U.N. is “a red line,” and rejected the international call for a presidential election to be held within 18 months — a key demand of the opposition.

But de Mistura, keeping to language laid out in the U.N. Security Council resolution in December that paved the way for the talks, insisted that political change, including a timetable for new elections within 18 months, is the ultimate goal.

“What is the real issue — the mother of all issues? Political transition,” he said.

Assad has announced that parliamentary elections in Syria will go ahead next month according to schedule. A Syrian official, Hisham al-Shaar, said the elections will be held only in areas under government control and there will be no polling stations in Syrian embassies abroad or in refugee camps.

On Monday, as the election campaign officially kicked off, streets in the capital Damascus were festooned with electoral banners and posters of hundreds of government-approved candidates.

In the so-called proximity talks in Geneva, the two sides don’t meet face to face, but meet separately with de Mistura and his team, who shuttle back and forth.

The talks began Monday with de Mistura hosting a government delegation led by Syria’s U.N. ambassador, Bashar Ja’afari. Speaking to reporters afterward, Ja’afari called the meeting “positive and constructive” and said the government delegation “submitted ideas and views” for a political solution to the crisis. He said the opposition will meet de Mistura on Tuesday, and his delegation would meet again on Wednesday.

The talks have shaped up as the best, if distant, chance in years to end a war that has created an opening for radical groups including Islamic State and the al-Qaida-backed Nusra Front to gain large swaths of land, and prompted at least 11 million people to leave their homes — many fleeing abroad to places like Turkey, Jordan, Lebanon and Iraq, as well as to Europe.