Image of the Week: During the SARS crisis, China built a hospital in seven days—a record at the time. Now, as coronavirus spreads, comes another rapid response. 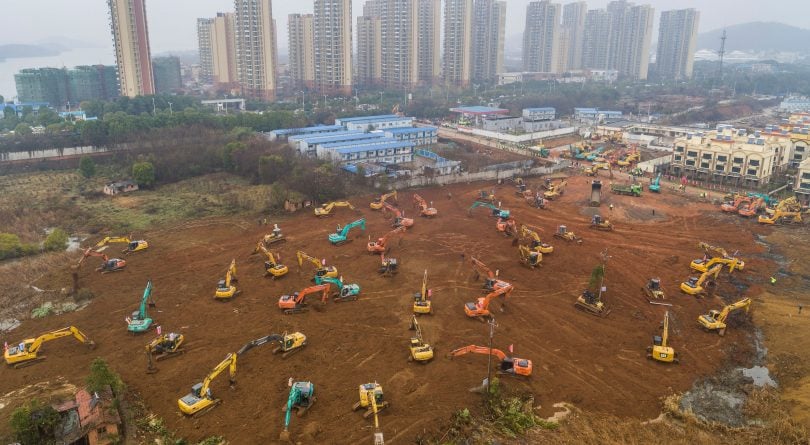 This aerial photo on Jan. 24 shows excavators at the construction site of a new hospital being built to treat patients from a deadly virus outbreak in Wuhan in China's central Hubei province.(AFP/Getty Images)

Canadian politicians love to snipe at our “hallway healthcare,” arguing too much government-run bureaucracy slows the system down. But in China, where the state runs everything with a terrifying totalitarian grip, government officials have burned all red tape to achieve a feat of astonishing speed and questionable architecture: they’re building two prefab hospitals from scratch in just two weeks. Curious onlookers can watch the live stream of four construction companies working round-the-clock in the city of Wuhan, where several thousand of its 11 million citizens have been stricken with the new strand of coronavirus that’s sowing fear worldwide. As of Thursday afternoon, the death toll has reached 170. In Wuhan, where the virus originated, hospitals are over-packed and one doctor has died from exposure to his patients. The city’s solution? Build a couple of enormous hospitals—Huoshenshan Hospital, a sprawling 25,000 sq.-m., with 1,000 beds (pictured above in its nascent hours; much of the foundation is already done), and Leishenshan Hospital, 40 km away, which is even bigger. Both are expected to open in early February, which wouldn’t quite best China’s previous world record for “fastest hospital ever built,” achieved in a seven-day sprint during the 2003 SARS outbreak. That facility, the Xiaotangshan Hospital in suburban Beijing, ended up treating one-seventh of the crisis’s patients. That campus, incidentally, has not aged well, and is currently being renovated to help staunch the new coronavirus. All well-sanitized hands are on deck.