Inside the triumph at Kobani, and the reality that awaits

Kurdish forces in Syria have turned the tide against Islamic State, but their ranks are becoming dangerously divided 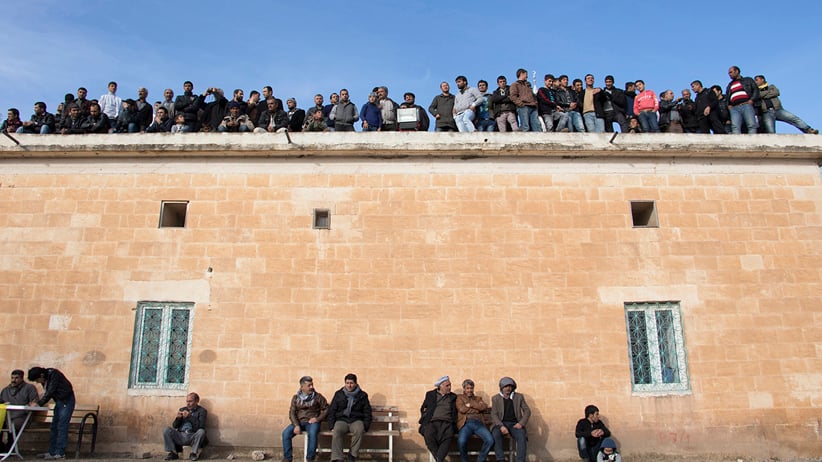 There was a brief moment when the shock wave of the bomb blast struck Medina Yousef’s small concrete shelter in Caykara, Turkey, that she felt despair for the first time. “Every bomb that falls on Kobani is like a bomb falling on my heart,” says the 45-year-old mother of four. “But this one was so powerful that I felt like the sky had fallen.”

Explosions and gunfire are nothing new to Yousef: Caykara, a muddy, rundown farming community on the border with Syria, is three kilometres from the besieged town of Kobani, where Islamic State militants have been battling Kurdish militias since last September. But the force of this blast left her frozen in place, as the dust jarred loose from the impact settled like talcum on her head.

Four months earlier, Yousef had escaped the Islamic State assault with her husband and teenage daughter, fleeing across the border and leaving behind a teenage son, a fighter with the Kurdish People’s Protection Units, or YPG. From Caykara, she has watched the gradual obliteration of the life she left behind.

On this evening last week, it was the thought of her son, possibly fighting for his life against an Islamic State offensive, that propelled her into motion. Yousef followed her husband out into the moonless night toward Caykara’s mosque to join the dozens of people huddled around bonfires in the parking lot. All eyes were fixated on Mishtenur Hill in the distance, a strategic outpost on Kobani’s southeastern flank under Islamic State control. The hilltop was alight with what appeared to be an intense battle.

Over the course of the next few hours, the battle waxed and waned. The group at Caykara’s mosque (some Kurdish activists from across Turkey, others merely curious teenagers) are normally boisterous during their nightly vigils—singing pro-Kurdish songs and taunting Islamic State with well-rehearsed chants. On this night, they, like Yousef, watched in awe. Most knew Mishtenur Hill was a key prize, the highest point in Kobani overlooking both the town and the southern supply routes used by Islamic State to ferry men and weaponry from their self-proclaimed capital in Raqqa. A victory there would hand Islamic State its first significant defeat and shift momentum in the war.

By the time the guns finally fell silent at around 2 a.m., the crowd at the mosque remained rooted in place. Nighttime silences usually signalled that Islamic State fighters were resupplying. “Groups of them use the darkness to set up new positions and then, at sunrise, they usually attack,” says Mehmdu Mahmud, a YPG fighter who recently smuggled himself back to Turkey from the front lines. This time, something felt different.

Yousef’s husband was on the phone, trying to contact his son with the YPG. For an hour, he dialled and redialled with no answer. Yousef began to think that her son had joined the assault on Mishtenur and might be dead. She began to pace.

Then her husband’s phone rang. “It was like heaven opened up and the angels started singing,” she recalls. “I despise my husband’s ring tone, but, this time, it was the most beautiful sound I had ever heard.” The message was positive: YPG forces, supported by peshmerga heavy weaponry, had taken Mishtenur.

It was a decisive battle, Mahmud says. Since June 2014, when Islamic State first burst onto the world stage with its dramatic takeover of Mosul, Iraq, its rapid advance has frightened and horrified the international community. The group has seemed invincible, or, at the very least, a force endlessly growing in strength. But the loss in Kobani has clearly demonstrated its vulnerability. “Since we took Mishtenur, our forces have advanced farther in the east and south of the town,” Mahmud adds. By Monday, numerous sources confirmed that Islamic State had been driven out of Kobani completely.

The tide is beginning to turn in various parts of northern Iraq and Syria. Kurdish forces, a loose alliance of groups that includes the YPG and peshmerga, have inflicted significant losses on Islamic State forces in Sinjar and have taken back control of villages surrounding Mosul. For the first time since the militants took over the city, Iraq’s second-largest, they find themselves under siege, with Kurdish artillery now in a position to shell the city centre.

But, along with the successes are emerging a whole new host of potential problems. At the heart of Islamic State’s expansion has been instability in the areas it has conquered. In Iraq, it capitalized on the fault lines dividing Sunni and Shia Muslims; in Syria, it has benefited from a civil war that has fractured the country. Kurdish gains have inspired a new wave of nationalism among Kurds. But the patriotism is far from united.

There are two main Kurdish groups fighting Islamic State. One, the Syrian YPG and its political wing (known by its Kurdish acronym, PYD), is made up of radical socialists guided by the revolutionary principles of Abdullah Ocalan, the founder of the Kurdistan Workers’ Party (PKK), which is considered a terrorist organization by the Turkish state. The other is the Iraqi peshmerga and its political overseers, the Kurdistan Democratic Party, or KDP, fervent capitalists with close ties to Turkey’s ruling elite.

Islamic State advances in Iraq and Syria provided a rallying cry for Kurds from both of these fundamentally adversarial political camps. At the same time, it has aggravated underlying tensions: Kurds in Iraq see themselves as the vanguard of a new Kurdish awakening, led by the KDP. Kurds in Syria, supported by leftist ideologues in Turkey, sense a socialist revolution in the making, led by the PYD. Not for the first time in Kurdish history, a dangerous clash between these two factions is brewing. 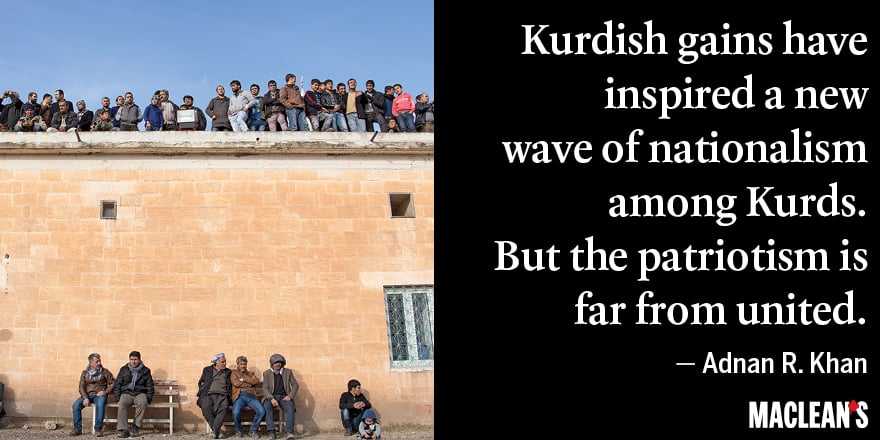 In Caykara, the mood is unambiguously pro-socialist. Yousef, for instance, says that in addition to her son fighting with the YPG in Kobani, another son is with YPG forces in Qamishli, a Kurdish-controlled city in Syria’s northeast, while a third has joined the PKK in their mountain redoubt in northern Iraq. “I have sacrificed a great deal for the Kurdish cause,” she says proudly. “Here, in Caykara, everyone supports Ocalan and his vision. I would go and fight myself, if I could, but the PYD won’t let me join.”

The battle in Kobani has transformed Caykara from an agrarian backwater to a buzzing revolutionary hub populated by an eclectic blend of radical leftists, self-styled socialist visionaries and the odd humanitarian activist. From early morning until well into the night, they gather at the village mosque, peering through binoculars at U.S.-led coalition bombers circling overhead, cheering loudly whenever they drop their payload on Islamic State targets.

From their front-row seats, local farmers who, at one time, worried about seeds and crop yields, now debate socialist principles with university graduates arriving from the cities. “We’re making history here,” says one farmer, Shukri Polat. “Before the war, this was a quiet village, but now, it is the centre of psychological support for the YPG. People from all over Turkey, from all over the world, are coming and witnessing our solidarity. This little place will be remembered.”

For some, such as 70-year-old Mehmet Issa Kizil, the village is the culmination of nearly four decades of struggle. Kizil claims to be one of the original Kurdish leftists, a core member of the group established by Ocalan in 1978 that would eventually become the PKK. He says he has been jailed and tortured by Turkish authorities, but has now finally reached the end of his journey. “Kobani is a holy place for me,” he says. “I will not leave Caykara until it is liberated. And, once it is, all Kurds will go there to rebuild it. It will become the centre of our struggle.”

With the sort fervour evident in Caykara, it’s not difficult to foresee difficult times ahead. In recent months, tensions between Turkey’s nationalists and Islamists and a reinvigorated radical left, led by Kurds, have spilled out onto the streets of major cities like Istanbul and Ankara. The PKK’s brand of social revolution is on the rise again, inspired by the PYD’s socialist experiment in Kobani and elsewhere.

In Iraq, where Kurdish peshmerga fighters from the KDP are fighting alongside their YPG counterparts to retake the predominantly Kurdish city of Sinjar from Islamic State, ideological differences have translated into mistrust on the battlefield. “YPG fighters were in a hurry to announce their entrance to the city, although it was not a part of the plan,” one peshmerga commander told the Kurdish Rudaw news agency. “Besides doing nothing, they have undermined our struggle to capture the city.”

Politically, the situation is not much better. Since February 2014, the PYD has been actively setting up its vision of a perfect socialist society in areas it controls in Syria, based on the PKK’s ideology. The project, which began in Kobani and Qamishli, has now expanded to include predominantly Kurdish regions in northwestern Iraq, where PYD leaders have organized meetings to help locals set up regional councils based on their socialist model. The KDP is not amused. “We will not accept any external intervention in the Kurdistan region of Iraq,” it announced in a statement in mid-January. “Such an attempt is illegal and against the Iraqi constitution.”

The PYD, meanwhile, denies it is doing anything more than helping the people in neglected regions such as Sinjar achieve self-determination. “Nobody cares about the Yazidi people,” says Fayza Abdi, co-president of the PYD legislative council from Kobani canton, referring to the persecuted religious minority in Sinjar, which also happens to be ethnically Kurdish. “The Sinjar people are using Ocalan’s philosophy to structure their society. The KDP refuses this idea; they refuse this philosophy.”

Simmering ideological divisions are now threatening to undermine any gains the Kurds have made against Islamic State. In Caykara, locals and their itinerant socialist guests have become increasingly wary of the role of the peshmerga in Kobani. One villager who regularly crosses illegally into the besieged town to bring in much-needed medical supplies complains that injured YPG fighters are being denied access to medical facilities in Turkey. “I’ve seen many fighters bleed to death at the border, because they were denied entry into Turkey,” he says, requesting anonymity. “But if a peshmerga fighter cuts himself shaving, he’s rushed to the hospital. It’s obvious the Turks are trying to destroy the PYD and support the KDP.”

Since the Kurds captured Mishtenur Hill, the mistrust has deepened. Murmurs are sweeping through Caykara’s dilapidated tents and crumbling concrete shacks of a nefarious plot to crush the revolution. Now, when people gather at the mosque, the talk turns to when, and if, the Turks will open the border and let the Kurds return to Kobani. Some are beginning to doubt whether that will happen any time soon, even with Islamic State now cleared out.

For Yousef and her husband, the possibility of spending any more time in Caykara than necessary seems unfathomable. Having Kobani back in Kurdish hands means leaving the village for good and beginning the difficult task of rebuilding their lives. “Nothing will stop me from going back,” Yousef says. “I will be happier living in a tent on my own land than in this rented house in a foreign country.”

But returning home may not be so easy. The Kurds have proven themselves capable of joining hands to fight a common enemy. The problem looming before them is what happens when that enemy is gone.