Welcome back to Little Britain 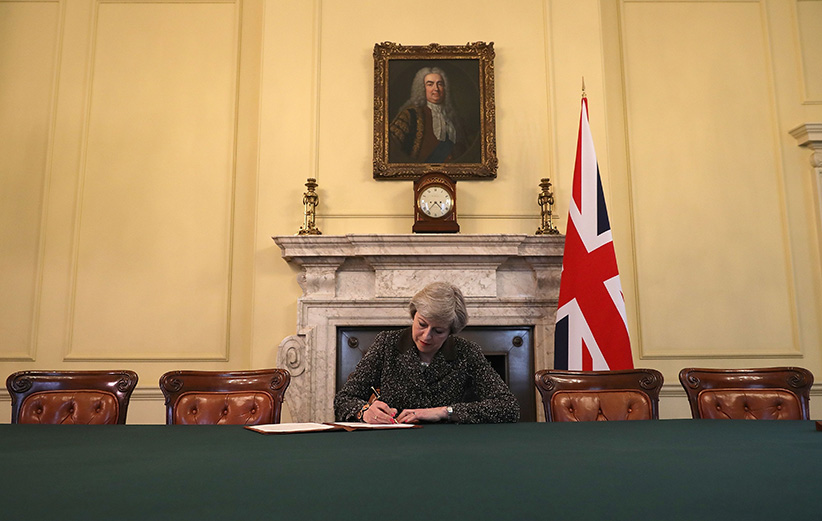 Britain’s Prime Minister Theresa May, sits below a painting of Britain’s first Prime Minister Robert Walpole, as she signs the official letter to European Council President Donald Tusk, invoking Article 50 and signalling the United Kingdom’s intention to leave the EU, in the cabinet office inside 10 Downing Street on March 28, 2017.
British Prime Minister Theresa May will send a letter to EU President Donald Tusk with Britain’s formal departure notification on Wednesday, opening up a two-year negotiating window before Britain actually leaves the bloc in 2019. (Christopher Furlong/AFP/Getty Images)

There’s no turning back now.

On Tuesday, sitting beneath a portrait of Britain’s first Prime Minister, Robert Walpole, in the Cabinet room at Downing Street, Theresa May sealed Britain’s fate as the cameras clicked and whirred. She signed the letter triggering Article 50 under the Lisbon Treaty—the legal mechanism that officially initiates the process of Britain’s departure from what has arguably been the greatest political bloc ever created, the European Union.

Today shortly after noon, the envelope was hand-delivered to the EU Headquarters by the British Ambassador to the EU, Sir Tim Barlow. European Council President Donald Tusk was in Brussels to receive it. He told reporters gathered that receiving the letter was not a happy event and added, as a message to the British people, “We already miss you. Thank you and goodbye.”

MORE: Brexit is about to begin. Here’s what you need to know.

European history’s most momentous economic divorce has officially begun. Two years of negotiations that no one expects to be anything but economically painful and politically complicated will follow.

Despite the arduous task ahead, the Prime Minister did her best to strike an upbeat and conciliatory tone.

This morning, May chaired an hour-long cabinet meeting and in the afternoon she addressed parliament saying this day marks “a moment for the country to come together.” She went on to add that it was her “fierce determination to get the right deal for every single person in this country. For as we face the opportunities ahead of us on this momentous journey, our shared values, interests and ambitions can—and must—bring us together.”

But before the Prime Minister had begun her speech, the British press was already buzzing with the leaked copy of the first resolution from Brussels—a dourly-worded, 11 page document understood to be authored in part by Michel Barnier, the EU’s chief Brexit negotiator.

In it, Britain is warned it will not be granted a free trade deal within the two-year negotiation time frame and that any transition arrangement once Brexit occurs in 2019 will be in place for an absolute maximum of three years. According to the Guardian, which obtained the document, the European parliament has resolved that “the EU will stridently protect its political, financial and social interests, and that the position for the U.K. even during the transition period will not be as positive as it is today.”

In addition it disclosed that a complex withdrawal agreement, “covering financial liabilities, citizens’ rights and the border in Ireland, will need to be accepted by a qualified majority of 72 per cent of the EU’s remaining 27 member states, representing 65 per cent of the population. The agreement would then need to be approved by the European parliament, voting by a simple majority.”

Jacob Rees Mogg, a high profile Euroskeptic and the MP for East Somerset, expressed his delight at the hard won battle for the Leave camp in the Telegraph. In a column that earnestly compared Brexit to the resurrection of Jesus Christ, Rees Mogg celebrated prospect of Britain going it alone. “British democracy is reborn and the yoke of Brussels will soon be gone. Reaching this stage has been beset by pitfalls, entrenched opposition and dirty tricks to keep the United Kingdom in the European Union, but at last the festal day arrives.”

On the other end of the spectrum was Lord Michael Heseltine, a former deputy prime minister under John Major, who told Channel 4 News that in his view, Brexit would result in precisely the opposite effect its proponents were hoping for. “This is the biggest sacrifice of British sovereignty that I can remember. And what’s going to happen now is that the Europeans will tell us the conditions on which we can trade with our biggest market. And when that becomes apparent, all the stuff about ‘regaining our sovereignty’ and ‘putting ourselves in charge’ will be exposed as the hypocrisy that it really was.”

In a week that began with a Daily Mail front page featuring an up-the-skirt camera angle photo of the Prime Minister and First Minister of Scotland and the headline, “Forget Brexit, who wins Legs-It!” it does not feel as if Britain is moving rapidly into a brave new future. The clocks went back an hour this week but you’d be mistaken for thinking it was half a century.