Welcome to the age of the despot

Every tyrant has now learned the Syrian lesson: you can bomb your cities and kill with impunity. How the West failed so horribly. 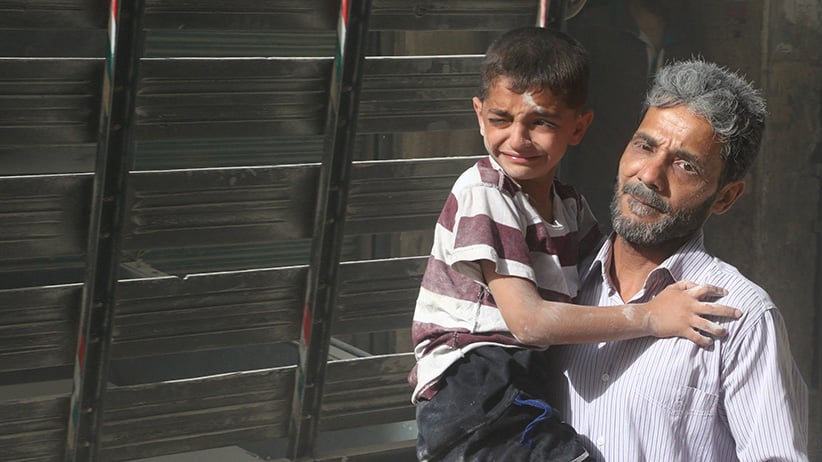 “Aleppo is now a synonym for hell,” is the way outgoing UN Secretary-General Ban Ki-moon described the merciless bombardments and massacres that the Russians, Assadists and Shia militias were inflicting upon the last major stronghold of the fractured and hopeless Syrian rebels last Friday. Five years after Syria’s quixotic, non-violent democratic uprising began, nearly half a million deaths, more than five million refugees, and it had all come to this.

“We have collectively failed the people of Syria,” Ban declared at his farewell press conference at the UN headquarters in New York. “Peace will only prevail when it is accompanied by compassion, justice and accountability for the abominable crimes we have seen.”

There’s not much hope for any of that, anytime soon, no matter what fresh horror Islamic State mutates into, whether it’s crushed in the Battle of Mosul or not. Islamic State was never the main culprit in the dismemberment of Syria. It was always the Syrian mass murderer, Bashar Assad.

And all over the world, every tinpot tyrant has learned the Syrian lesson. You can get away with it. A United Nations commission of inquiry can declare you guilty of undertaking “a state policy of extermination of the civilian population” of your country, and you can laugh it off, and for any of these “abominable” crimes to be headed off in the dark years to come, the rest of us are going to need to stop telling ourselves comforting lies about “Western intervention.” Entire political careers and the most stellar reputations in journalism have been built around these tawdry, self-exculpating deceptions. They may be ineradicable, but some honest effort should be put into enumerating them and rooting them out.

We might start by admitting that it’s not all George W. Bush’s fault. It’s an idiotic claim, but it is deeply embedded in all the alibis and excuses that have paralyzed the NATO capitals in the face of the Syrian catastrophe. And Syria’s death throes are not over yet, not by a long shot.

Whatever the jollies we’ve all enjoyed at Bush’s expense, the Anglo-American misadventure in Mesopotamia was more than 13 years ago. The heaps of Syrian dead have grown far more than twice as high in half the time that it took the 2003-13 butcher’s bill from Shock and Awe to come due. The Iraqi invasion did not precipitate Syria’s implosion. Even if it did, that would not excuse anyone, least of all the United States, for the determined indifference that has left the Syrian people to their hideous fate.

Saddam had already slaughtered at least a million people by the time Bush showed up—by war, by poison gas in the genocidal Al-Anfal campaign against the Kurds, by his ethnic cleansing of the Marsh Arabs, by torture and by firing squad. If you think Iraq and Syria would be better off today if Saddam had been left unmolested in Baghdad, there’s something wrong with you.

Iraq was largely at peace and the Anbar uprising had succeeded in uprooting al-Qaeda by 2011, but Barack Obama decided to betray the Sunni minority and give the run of the place to Nouri al-Maliki, the sectarian Shiite gangster handpicked by the Quds Force’s Qasem Soleimani, last seen in public only last weekend, strutting around Aleppo, victorious.

The next favourite pretext for letting Syria die is Afghanistan, the “quagmire.” It’s a country still bruised and battered from the years of mass murder and mayhem preceding 9/11, but a decade’s worth of opinion polling among Afghans following the 2001 ouster of the lunatic Taliban emirate never showed anything less than unambiguous support for the NATO-led, United Nations’ International Security Assistance Force mission that chased the hated Talibs back into Pakistan. They’re still blowing things up. But Afghanistan limps along. The country’s democratically elected president, the economist Ashraf Ghani, was ranked 50th on Foreign Policy magazine’s 2013 roll of the world’s 100 leading intellectuals. Syria should be so lucky.

It is conveniently forgotten that the United States did not overthrow the government of deranged strongman Moammar Gadhafi. The Libyan people did. They rose up in their hundreds of thousands, and it was only after Gadhafi threatened mass slaughter of his citizens that Europe and the Arab League countries dragged the United States into enforcing a no-fly zone that crippled the Libyan air force. A year after the 2011 intervention, even after Obama pushed NATO into walking away from Libya, a Gallup poll found 75 per cent of Libyans backed the NATO air operation. Half the Libyans surveyed (54 per cent) said they approved of the Obama administration, even, “among the highest approval Gallup has recorded in the Middle East and North Africa region outside of Israel,” Gallup reported.

Libya is a failed state, with an internationally recognized “national unity” government that barely governs beyond Tripoli and two national armies with separate blocs of militias united only in their commitment to protecting the re-emerging oil industry and cleaning out the pockets of Islamic State that have set in, as you’d expect, like gangrene. And yet, compared to Syria, Libya is a peaceable kingdom.

Oh, but Syria. Fiendishly complicated. No good guys, and “there’s nothing we could have done” now substitutes for “there’s nothing we can do.” The “we” in that lie is always intended to mean “the Americans.” The record of lost American opportunities and unmade decisions speaks loudly enough for itself.

A no-fly zone before the Russians got involved. Accelerated arming of patriotic and democratic rebel groups instead of letting freelance Gulf State Islamists fill the blanks. A swift and punishing rain of drone strikes after Assad crossed Obama’s professed “red line” on the use of poison gas. Supplying the early Free Syrian Army units with anti-aircraft weapons to shoot down Assad’s barrel bombers. A green light to the CIA’s proposed long-game overthrow of the Assad regime. No, Obama said. No. I’m smarter than everyone here.

By the time Donald Trump came along, Obama’s inner circle on Syria had been emptied so thoroughly that his closest confidante was Ben Rhodes, Deputy National Security Adviser for Strategic Communications. A public-relations man with a creative writing degree.

It was never about what the United States could have done. It was about what Obama would not do, and he would not do anything to upset the Khomeinists in Tehran. Hurt their feelings enough and they’d pull Iran out of Obama’s “legacy” foreign policy of nuclear rapprochement. The whole thing has been a failure, from beginning to end.

The lessons the world’s despots can take from this are as clear as crystal. And if there is any doubt, along comes Donald Trump, the president-elect, to clear it up: “We will stop looking to topple regimes and overthrow governments, folks.” You can get away with anything now.