What an Iraqi officer fighting ISIS thinks of Trump

Commanders on the front lines are shaking their heads. The Mosul offensive would have been a nightmare under Trump, says one. 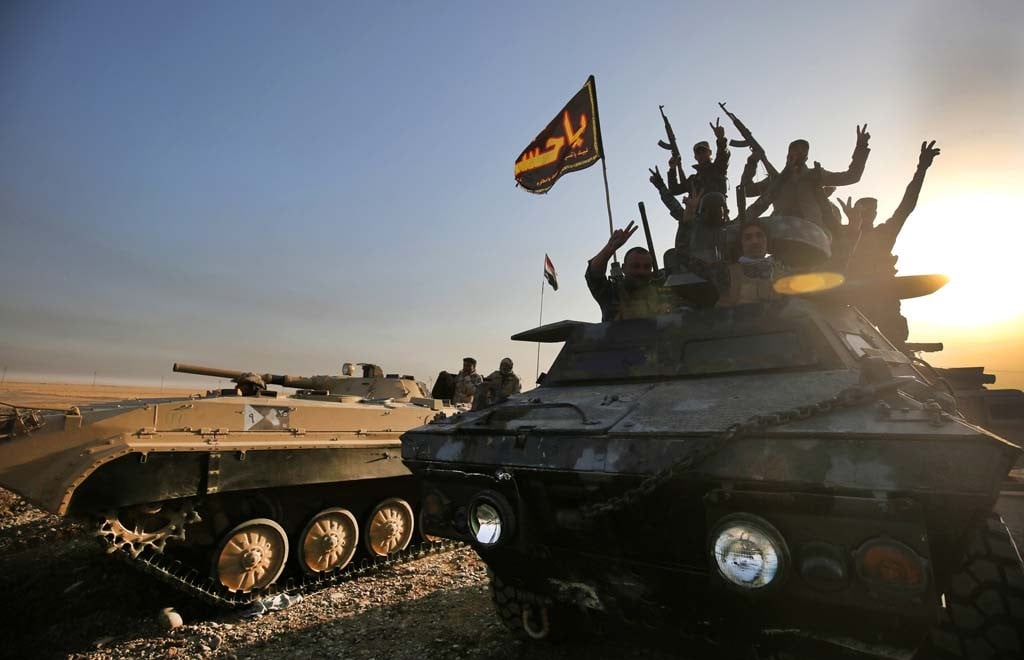 Iraqi forces deploy in the area of al-Shourah, some 45 kms south of Mosul, as they advance towards the city to retake it from the Islamic State (IS) group jihadists, on October 17, 2016. (Ahmad Al-Rubaye/AFP/Getty Images)

Some Iraqi and Kurdish military commanders in northern Iraq are breathing a sigh of relief that the U.S. election took place this week, but for reasons that do not include Donald Trump becoming America’s 45th president. Far from supporting the surprise win, one senior officer says he and his fellow frontline commanders are just happy the election took place after they had already launched their much-anticipated Mosul offensive on Oct. 17.

“It’s a nightmare to consider what this offensive would have looked like if Donald Trump was in power,” says the officer with the first brigade of the Iraqi Special Operations Forces, who are leading the eastern front inside Mosul city, requesting anonymity because he has been ordered not to discuss the election results with the media. “I followed the campaign closely and what he was saying makes no sense militarily.”

According to Trump, Iraqi forces and their U.S.-led coalition partners should have made a surprise attack on Islamic State in Mosul.

“Why can’t they do it quietly?” he said during the final presidential debate on Oct. 19. “Why can’t they do the attack, make it a sneak attack, and after the attack is made, inform the American public that we’ve knocked out the leaders, we’ve had a tremendous success?”

But the officers and soldiers on the ground have a vastly different perspective. The first problem, the Iraqi commander points out, is terrain. “How can you sneak up on Daesh on flat, open ground like this?” he says, referring to Islamic State by its Arabic acronym. “We always knew the fight for Mosul would be big. It would need thousands of soldiers with heavy weapons, artillery, tanks and armoured vehicles. You cannot put those in place quietly. We’re not sure what he thinks a surprise attack would have looked like or what it would have accomplished.”

Indeed, during his election campaign, Trump repeatedly advocated for taking the enemy by surprise but never once specified how his sneak attack could actually work. If he meant quietly eliminating Islamic State’s self-proclaimed caliph, Abu Bakr al Baghdadi, along with his top lieutenants, then his plan was nothing more than a continuation of President Barack Obama’s existing strategy. American Special Forces have been on that mission for at least the past two years.

If he meant a shock-and-awe blitzkrieg on the city, then the odds of hitting Islamic State’s leadership would be about as good as unloading a shotgun on a school of minnows, hoping there’s a trout hiding among them. The end result would be a lot of dead minnows.

In this case, however, it would be hundreds of innocent civilians. Such mass murder would not only be illegal under international law but it would also provide more grist for Islamic State’s propaganda mill and re-energize its faltering recruitment drive.

Moreover, it would be impossible to confirm whether or not Baghdadi, or anyone of consequence, was actually killed. The Taliban was able to keep the death of its founder, Mullah Mohammad Omar, secret for more than two years. The Islamic State’s inner circle is far more secretive, even among its own followers. Some have argued that Baghdadi may already be dead but, without confirmation, his project of an Islamic caliphate is bound to survive.

Baghdadi’s conclusive death would clearly deliver a severe blow to Islamic State, but the reverse is also true: the demise of the Islamic State would spell the end of Baghdadi. For a man who has staked his legitimacy on a God-given mission to establish his caliphate, the end of the caliphate means the end of Baghdadi. The Islamic State would no doubt continue to carry out terrorist attacks, in Iraq and around the world, but it would be reduced to its hardcore ideologues while its recruitment pitch would be severely undermined.

To that end, an all-out assault on Mosul makes military sense and openly advertising it has had its own advantages, the Iraqi commander adds. It has, for instance, given time for civilians in the city to prepare. The internally displaced escaping Islamic State’s clutches have told Maclean’s they were ready for the slow pace of the Iraqi army advance. They had stocked up on water, food and other supplies for a drawn-out battle. They had set up safe rooms in their homes where they could take shelter from the fighting.

According to the Mosul Eye blog, reportedly run by a lone activist inside the city, some civilians have also joined resistance groups secretly assisting the Iraqi army, providing crucial intelligence on Islamic State’s defensive positions and the tactics they are preparing to use, at great risk to their lives.

The militants have responded with their usual brutality, executing hundreds in the lead-up to the offensive. Their panicked response, witnesses tell Maclean’s, has further eroded any scrap of credibility Islamic State might have had with Mosul’s population. Telegraphing the scale of the coalition arrayed against them, estimated at over 40,000 fighters, has also chipped away at its fighters’ morale, the commander says, and created an atmosphere in the city that undermines their will to resist a drawn-out siege.

Trump’s surprise attack would have had the opposite effect. It would have left civilians exposed while strengthening Islamic State’s narrative of an Iraqi army and its international backers hell-bent on eliminating Iraq’s Sunni Muslims. And tactically, it would have been a monumental failure.

A key component of Islamic State’s defence strategy has been a vast network of tunnels they use to hide from airstrikes and carry out surprise. Those tunnels have been under construction for the past two years, residents in liberated neighbourhoods say, meaning that the group has been preparing for an assault on Mosul virtually since the day they entered the city in 2014.

The Iraqi commander tells Maclean’s they were aware of the tunnel systems well before they began their assault and devised their strategy partly based on their existence. “Maybe Trump didn’t know about them,” he says. “But then he shouldn’t be criticizing our strategy before he has all of the information. This is the same man who will now become the commander of the world’s most powerful army. Does that make me nervous? Of course it does.”