What Canada and America owe Haiti

Andray Domise on the two nations' brutal, ruinous record in Haiti, and why it must inform how asylum seekers are being treated today

Just over a hundred years ago, U.S. presidential candidate Woodrow Wilson barnstormed across the country, speaking of America’s dire need to expand the global market for American manufactured goods. In one speech, he spoke of a need for surplus manufactured goods to find a home in foreign lands, “or else there will be a congestion that will operate calamitously upon the economic conditions of the country.”

After Wilson assumed the presidency, he turned his gaze toward the Caribbean, and Haiti in particular. Aside from establishing another trade foothold in the region, the U.S. presence in Haiti would also provide a naval coaling station in Môle-Saint-Nicolas Harbor, thus securing access to the Panama Canal.

The State Department had reasons for concern in the region; lasting political instability plagued the nation, and in 1915 Haitian dictator Vilbrun Guillaume Sam was overthrown and murdered by a mob. Perhaps most worrisome of all, Germans established a commercial foothold in the country through the coffee industry, as well as a social one through intermarriage with the Haitian upper class. 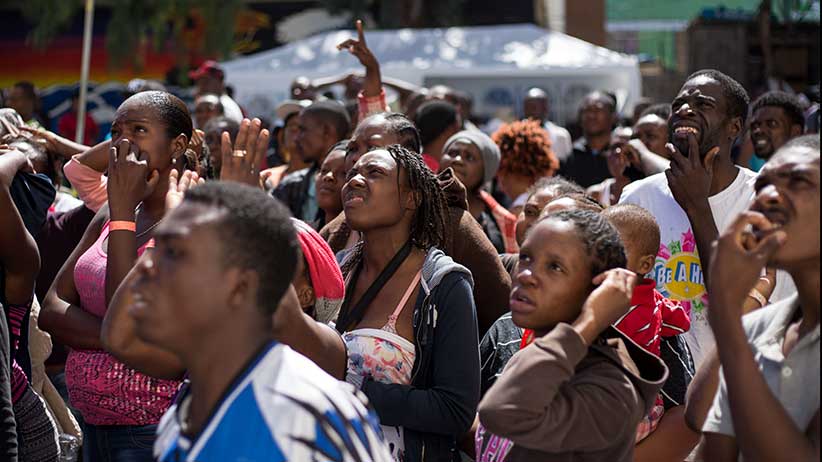 Haitian migrants seeking asylum in the United States, listen to announcements as they wait for their opportunity to get a spot at the Padre Chava soup kitchen and shelter in the Mexican border city of Tijuana, in Baja Calif., on Oct. 6, 2016.
(GUILLERMO ARIAS/AFP/Getty Images)

At first, the State Department under Wilson opened diplomacy with an offer of military assistance to Haiti, with the provision that it would relinquish control of its customs houses. When subsequent Haitian governments balked at the offers, the Wilson administration used Sam’s murder as pretext for marine invasion and occupation, under the humanitarian guise of peacekeeping. In a letter to Secretary of State William Jennings Bryan, Wilson offered that America “cannot consent to stand by and permit revolutionary conditions constantly to exist there.”

The American marines would go on to massacre thousands of resistance fighters, crush democratic opposition and assist in gutting what little economic self-determination that Haitians had until that point. Its financial reserves having already been moved to the U.S. in 1914, the Haitian Congress, stacked with pro-American lackeys, offered little resistance to the coming tide. American goods flowed into the island, only to be sold by Syrians, Lebanese and Italians who swept in to take control of the commercial economy.

READ MORE: The migrant surge on the border isn’t a crisis, it’s just a fiasco

While other nations and peoples enriched themselves through Haiti’s lands and resources, Haitians themselves were excluded from the fruits of their own nation and forced into varying states of crushing poverty throughout the country’s existence.

This, for the last hundred and more years, has been the story of the West’s relationship with the first and only nation established via slave revolt.

The Trump Administration recently announced it will discontinue the Temporary Protected Status designation for nearly 60,000 Haitians living in the U.S. The status was issued in early 2010, briefly after Haiti was devastated by an earthquake that killed an estimated 316,000 people and displaced roughly 1.5 million. Gross mismanagement of recovery efforts by foreign aid agencies, both government and private, not only resulted in profiteering and failure to restore Haiti’s infrastructure, but UN aid workers introduced a cholera outbreak that, as of this May, killed over 9,000 Haitians and sickened an additional 800,000.

Haitians working in the U.S. have integrated into their communities, own homes and have logged over $1 billion in money transfers back to Haiti in 2015. These facts aside, the announcement is particularly galling, given America’s direct hand in creating Haiti as it exists today.

Canada is not blameless either; it has pledged soldiers and military equipment to the cause of undermining Haiti’s democracy. And inevitably, the Canadian government will declare that despite our existing relief and integration infrastructure designed specifically for Haitian expats (especially within Montréal), we simply don’t have the room to accommodate the people whose freedom we helped eradicate.

In the period immediately following the 2010 earthquake, average citizens poured out donations in compassion towards helping Haiti recover. In turn, governments and NGOs took another opportunity to continue their centuries-long plunder and impoverishment of the country and its people. Haitian misery and death has quite literally been converted into unearned profit and goodwill. Of the $13.5 billion in relief aid pledged by governments and private donors (including $500 million raised by the Red Cross), little of it has landed in the hands of Haitian people and organizations.

Rather than pay local workers and businesses to rebuild their shattered country, the funding has instead been absorbed by flown-in foreign contractors and sweatshops. And rather than compensate Haitians for the pestilence and death visited on them by purported relief workers, the UN invoked its immunity clause to have a class-action lawsuit dismissed in court. It took nearly seven years for the UN to even admit its role in causing the outbreak.

It is difficult to overstate the degree to which the west, including the United States and Canada, have exacted economic, social, political and military violence on Haiti. In 1825, France sent warships to the Haitian coast and demanded compensation for depriving French slaveowners of their property—enslaved Black bodies—and bullied Haiti into a pledge of 150 million francs. A repayment of that debt, as of 2010, would have cleared US$22 billion.

To date, France still refuses to acknowledge, much less repay its gunpoint robbery. In 1991, the Haitian military (whose leader, Raoul Cedras, was reportedly trained and funded by the CIA) overthrew the government after President Jean-Bertrand Aristide pledged to hold it accountable for the corrupting influence of the drug trade. After returning to power in 1994, Aristide held terms in office before again being overthrown in 2004, not long after making an official demand of reparations from the French.

Canada played a significant role in Aristide’s ouster. Not only did the Chrétien* government host a conference on Haiti’s future (attended by U.S., French and Latin American officials, but none from Haiti), Canadian soldiers were provided to scuttle Aristide out of the country and offer support and security for the newly-installed provisional government. The result has been a stretch of unmitigated humanitarian disasters for over a decade, for which Canada has yet to accept any responsibility.

As a Black writer of Caribbean background, it would be irresponsible to omit a few personal facts, so forgive me if I step back for a second. Much of my writing is informed by years of research on the west’s policy towards the islands, particularly the west’s attitudes after the Haitian slave rebellion led to its independence from France in 1804. The roots of Black liberation are spread across the islands, from the Maroon rebellions in Jamaica, to the Garifuna pogroms that washed defeated freedom fighters against the shores of Honduras. In my view, there is no separating the current paternalistic western view of Haiti—poor, dysfunctional, corrupt—from the doctrines of white supremacy that asserted the natural state of the negro is in eternal bondage under the yoke of white men.

The white supremacy that underpins the Trump administration, as well as its supporters, has been sufficiently well documented elsewhere, so I’ll not rehash it now. But there will inevitably come a moment when the Trudeau government announces that, while it has the utmost sympathy for the plight of Haiti’s economic refugees, they will need to go through proper channels to find shelter here. That moment will put an exclamation mark on the cheerful complicity of an administration that got elected partially on its commitment to return Canada to an age of compassion and humanitarianism, and then failed to deliver on its promises.

The Trudeau government, after all, presided over the end to our own visa and special protections program for Haitian migrants, which was terminated in August of 2016.

As it is, we already expect the worst of the American government. The Haitian people have had no reason to assume otherwise, from the moment they freed themselves and raised the nation’s flag. But Canadians purportedly chose hope and compassion two years ago. We could pledge aid that actually ends up in the hands of Haitian people and local organizations. We could also reintroduce relaxed immigration rules that allow displaced Haitians to continue earning living wages and helping to rebuild their home country.

What happens next will not only determine who we are as a nation towards others in need, it will determine who Canada is towards Black people whom we reached beyond our borders to destabilize, subjugate and oppress.

Western nations, Canada included, owe Haiti. The question is not whether we have the capacity help. It’s whether we will ever choose to live up to our own vaunted standards and settle our debts.