What Canada can do for Kurds in Iraq 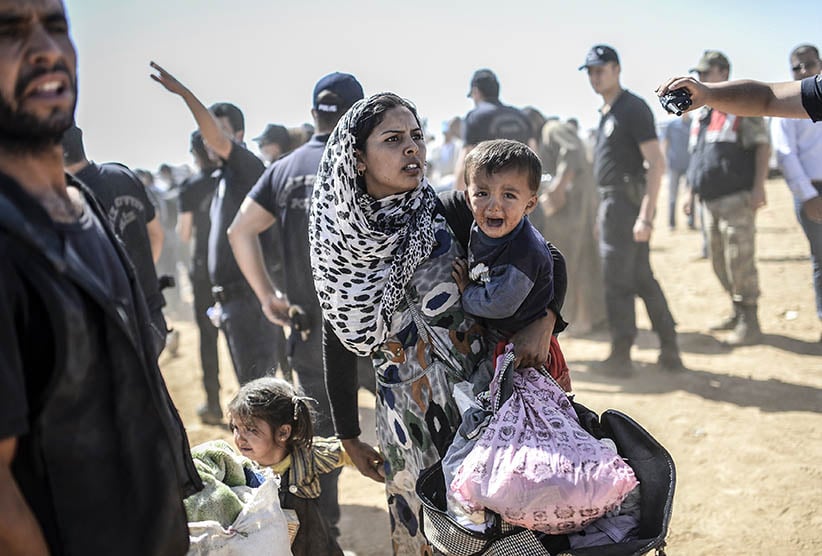 A Syrian Kurdish woman crosses the border between Syria and Turkey at the southeastern town of Suruc in Sanliurfa province on September 23, 2014. The UN refugee agency warned Tuesday that as many as 400,000 people may flee to Turkey from Syria’s Kurdish region to escape attacks by the Islamic State group. (BULENT KILIC/AFP/Getty Images)

Falah Mustafa Bakir, longtime foreign minister of the Kurdistan Regional Government in northern Iraq, has come away from meetings with top Canadian officials, including Defence Minister Harjit Sajjan, reassured that Canada’s commitment to confronting the Islamic State jihadist group will not diminish despite Ottawa’s pledge to withdraw CF-18s fighter jets from the air campaign against the group.

The Kurdistan Regional Government (KRG) is a semi-autonomous region in northern Iraq that has been at the forefront of the fight against Islamic State. Many Canadian airstrikes have targeted Islamic State positions opposite Kurdish lines. And Kurdish peshmerga soldiers have also been working closely with Canadian special forces trainers and advisers on the ground for more than a year.

“What we have been told is that Canada will not abandon the international coalition,” Bakir told Maclean’s during a visit to Canada this week.

“Yes, the decision has been made to reduce part of the air campaign, but Canada’s contribution to other parts, like providing training, capacity building, equipment or other types of military support will continue.”

Bakir says he has not yet been told exactly how Canada might increase its assistance to Iraqi and Iraqi Kurdish forces, but listed a number of areas in which his government needs help, including military hardware such as weapons, ammunition, bulletproof vests and night-vision goggles; medical training, including mobile battlefield clinics and ambulances; communications; and help dealing with mustard and chlorine gas attacks, which Islamic State has been accused of launching.

Bakir stressed the KRG’s gratitude for Canada’s help thus far and says he respects the Liberal government’s decision to end Canada’s participation in the air campaign against Islamic State, but he says airstrikes have been effective.

“The combination of airstrikes targeting ISIS targets and the peshmerga forces on the ground, that combination worked very well in pushing ISIS back and reclaiming territory,” he says.

“Yes, it’s true that you can’t defeat ISIS only from the air, but when you have reliable partners such as the peshmerga forces on the ground, it guarantees the success of any operation.”

As an example, Bakir cites the recent capture from Islamic State of the town of Sinjar, which Islamic State had held for more than a year after massacring hundreds of male members of the Yazidi religious minority and enslaving thousands of Yazidi women and girls. The town was liberated with few Kurdish casualties, he says, in part because of the close coordination between the international coalition launching airstrikes and Kurdish ground troops.

“We believe this is a shared responsibility. It is a common fight, and we are proud that our peshmerga are on the front line fighting this war. But we need our partners like Canada and the United States and other European countries who stand for values of freedom, democracy and rule of law in order to do it,” he says.

The KRG is sheltering nearly two million refugees and internally displaced people on its territory. Bakir says it has inadequate resources to care for them.

“We appreciate the decision that has been made to welcome certain number of Syrian refugees,” he says, a reference to Canada’s commitment to accept 25,000 Syrians over the next few months. “But we believe stabilization and solving their problems in the countries where they are would help a great deal.”

Bakir would also like Ottawa to open a consular office in the Iraqi Kurdish capital of Erbil. He says that would facilitate a strengthening of cultural and economic ties between Canada and the KRG.

“The people of Kurdistan are friendly and are faithful to their friends and to those who stand by them during times of difficulty and crisis,” he says, looking ahead to a time when, he hopes, relations between Canada and the KRG will be about more than military and humanitarian support.