What happened on Flight 918

CanJet crew praised for their heroics 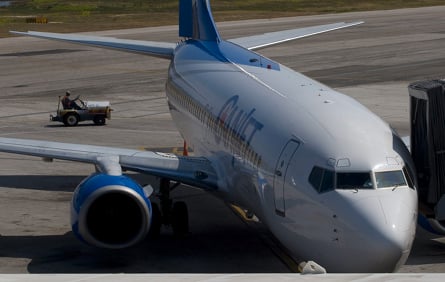 The obvious question still looms (how did a man with a gun get past airport security?) but this much appears settled: the hostage crisis aboard a Canadian airliner in Jamaica had a happy ending because of the calm, quick-thinking actions of CanJet employees.

As details of the overnight ordeal continue to trickle out, the eight-person crew—two pilots, five flight attendants and a plainclothes “security official”—are being described as heroes. They comforted distraught passengers. They scurried young children to the back of the plane. And they remained composed even after the hijacker fired a bullet through the open cabin door. In fact, it was one of the flight attendants—not a government negotiator—who convinced the agitated gunman to release all the passengers in exchange for their cash and jewelry. “She saved us,” one woman told reporters.

Kent Woodside, CanJet’s vice-president, praised the crew’s professionalism. “I’m just so proud how they dealt with it all,” he said during a news conference in Halifax. “In my view, that speaks to their training and their integrity.”

Although the specifics vary from airline to airline, all pilots and flight attendants in Canada are taught how to react to a hostage situation. Mandated by Transport Canada, the training is part of an annual refresher course known as Crew Resource Management (CRM). “It’s very difficult to get into specifics because then we start to tread into security-sensitive information,” says Capt. Craig Hall, an Air Canada Jazz pilot and the Canadian Director of the Air Line Pilots Association’s National Security Committee. “What I can tell you is that the objective is to make sure the crew is safe and secure, and by extension, the passengers. If we take care of the crew then they are able to take care of the passengers. We also want to ensure that we keep the situation in a manageable state.”

Joslyn Dicks, president of the Canadian Flight Attendants Union, says keeping passengers calm is always the top priority, regardless of the situation. “I don’t know how anybody ever gets prepared for what happened today, but yes, there is extensive training and we are given objectives on how to handle that,” says Dicks, whose union represents Air Canada Jazz flight attendants. “It’s like everything else, though. They can only train you, but at the end of the day it becomes about how you are as a person and how strong you are when you encounter that type of situation.”

The CanJet crew remains in seclusion, but the company has identified them as follows: Captain James Murphy, Halifax; First Officer Glenn Johnson, Montreal; Flight attendants Nicole Rogers, Halifax; Heidi Tofflemire, Halifax; Anu Goswami, Toronto; Tony Bettencourt, Toronto; Carolina Santizo-Arriola, Toronto; and air-care security officer Gary Knickle, Halifax. “Those folks love their jobs and care for their passengers,” says Peter Baxter of the Canadian Union of Public Employees, which represents CanJet flight attendants. “So to hear all these good reports coming back about the cabin crew and the officers on board doesn’t surprise me in the least.”

By all accounts, the hijacking came without warning. Flight 918 was on a late-night stopover in Montego Bay en route to Cuba when the man forced his way through security, and stormed the airliner not long before attendants were set to close the gate for takeoff.

Witness accounts indicated the young man was brandishing a handgun when he passed security; some reports suggested that he was wearing a workers’ pass as he made his way through the lobby of Sangster Airport. Once on the plane, passengers said, he demanded to leave the country, shouting, “This is a real hijacking. This is f-ing serious.”

The early phase of the standoff was harrowing for both passengers and crew.

On board were some 159 vacationers and eight crew (in all, 174 passengers were scheduled to board). The gunman reportedly blasted a flight attendant with a fire extinguisher, and fired his gun at an unknown target out the back door of the aircraft.

Fortunately for the passengers, a quick-thinking flight attendant convinced the man to accept cash, jewelry and passports in exchange for allowing them and two crew to leave the plane. Within an hour, all but six crew members were safely in the airport.

Still, negotiations dragged on for the next seven hours, by which time authorities had assembled an elite military unit called the Defence Force Counter-terrorism Operations Group. At 6:40 a.m.—with negotiations going nowhere—the commando-style squad stormed the plane and forced the hijacker to surrender without bloodshed. The remaining six crew members were freed without injury.

Police arrested a man later identified as 21-year-old Stephen Fray, a Montego Bay resident and the son of a prominent Jamaican businessman. The country’s information minister, Daryl Vaz, described him as a man with “mental challenges.”

The incident has raised concern about security measures at the Jamaican airport but Prime Minister Stephen Harper wasn’t dwelling on those failures, perceived or real. The PM happened to be in Kingston on his way home from the Summit of the Americas, and was to address the country’s parliament. Early this morning, he flew to Montego Bay to offer gratitude to the rescuers. “Today is a testament to the personal bravery of all those involved and the close co-operation between friends that has allowed us to save lives, and more importantly to escape this without any injuries at all,” he said. “Today is a day to be truly joyful. It’s very rare that we have events like this that end so well.”