What it's like to be deported from Trump's America

Planeloads of deportees land each day at an air force base in Guatemala, often dirty, anxious and disoriented after spending hours in shackles 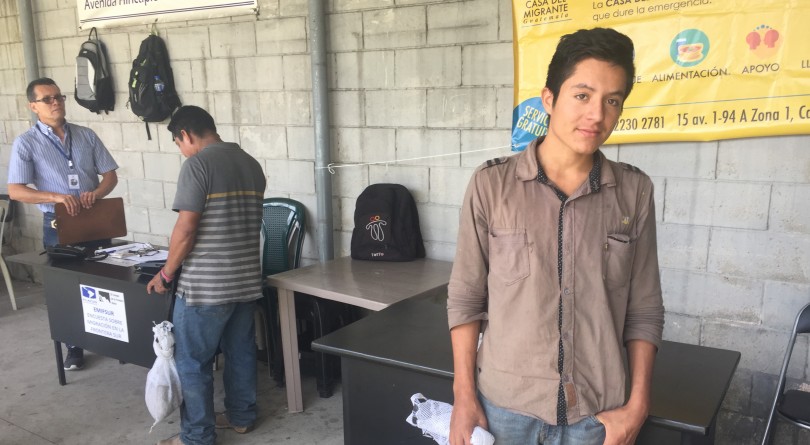 Shackled around his waist, wrists and ankles, this was not the way Samuel Noé Calanche Quiñonez envisioned his first flight ever. On July 19, the 18-year-old boarded a plane at McAllen Air Force base in Texas, with around 100 other deportees, mostly men.

“Bonita experiencia,” or “beautiful experience,” he says to me laughing sarcastically in a restricted area of the Guatemalan Air Force base in Guatemala City. Laughter is hard to come by around here. More common: disappointment.

“I’m disappointed because we all go with the expectation to arrive. We want to do something. Work. Because over there, there are opportunities that we don’t have here in Guatemala,” he says. Calanche has not spoken to his father or mother in the 20 days since he left for the U.S. They do not even know he was deported back home.

READ: Abdoul Abdi will not be deported. But how much of a win is it, really?

Lack of work and poverty is the main driving force behind Guatemalan migration. World Bank figures show more and more people cannot afford to put food on the table—59 per cent of the population live in poverty, despite strong economic growth.

Many deportees, such as Calanche, were caught crossing the U.S.-Mexico border illegally. Others lived and worked for years, up to 20 in some cases, undocumented before American authorities discovered them.

On this day, they all have the same thing in common: U.S. authorities are sending them back to Guatemalan soil.

In Guatemala though, local NGOs and human rights organizations are sounding the alarm over the deportation process—calling it a violation of human rights. Maclean’s obtained special access inside the Guatemalan Air Force base where the deportation flights arrive to observe first-hand the condition of deportees and the process they go through when they arrive.

“I believe the process violates the human rights of these people because they are chained inside the plane,” says Father Mauro Verzeletti, the director of Casa del Migrante, one of the main NGOs in the country that helps migrants and deportees—and the only one that operates a shelter.

“When you put someone in chains for a 5, 6, 7-hour trip, that causes real trauma. Such treatment violates all rights, no? It’s a racist act, xenophobic, and it is terroristic of the state towards migrants when it chains people to deport them to their country of origin,” he says.

An incident on one of the planes, chartered by U.S. Immigration and Customs Enforcement (ICE),  on July 11 demonstrates how easily things could turn tragic. On that day a fire broke out inside one of the planes, according to local human rights groups, including the Casa del Migrante. The deportees witnessed it all play out, all the while shackled without an easy way to escape if necessary. Thankfully, the plane ended up making an emergency landing in Mexico and the fire was put out.

“The plane practically entered into a situation of mechanical failure, which started a fire and this demonstrates that the U.S. is not interested in the lives of these people,” says Verzeletti. “The planes are very old…and we are warning that a possible tragedy could happen.”

Asked about the incident, an ICE spokesperson stated: “There was no fire aboard the removal flight operated by World Atlantic Airways. An incident occurred with a lightbulb mounted inside a wall resulting in an odor.  The ICE Air Operations staff and trained flight crew immediately addressed and reported the incident. The aircraft remained safe to occupy and operate at all times. ICE Air Operations opened an Aviation Safety Incident Report, and this incident remains under review by Aviation Safety and Compliance Officers.”

On the question of handcuffing passengers, ICE said only that “detainees were appropriately restrained.”

During the flights, deportees say they are provided with a snack. Officials uncuff them about 30 minutes before landing according to deportees.

On the day of his arrival back in Guatemala, Calanche’s flight is one of three departing the United States to Guatemala. Each plane brings about 100 to 135 Guatemalans back to their homeland. The number of flights has roughly doubled in the last four months, from 6-7 a week to 10-14 according to staff at the Casa del Migrante.

ICE contracts the planes through Classic Air Charter Services, which sub-contracts to two carriers, Swift International and World Atlantic Airways, according to a spokesperson. 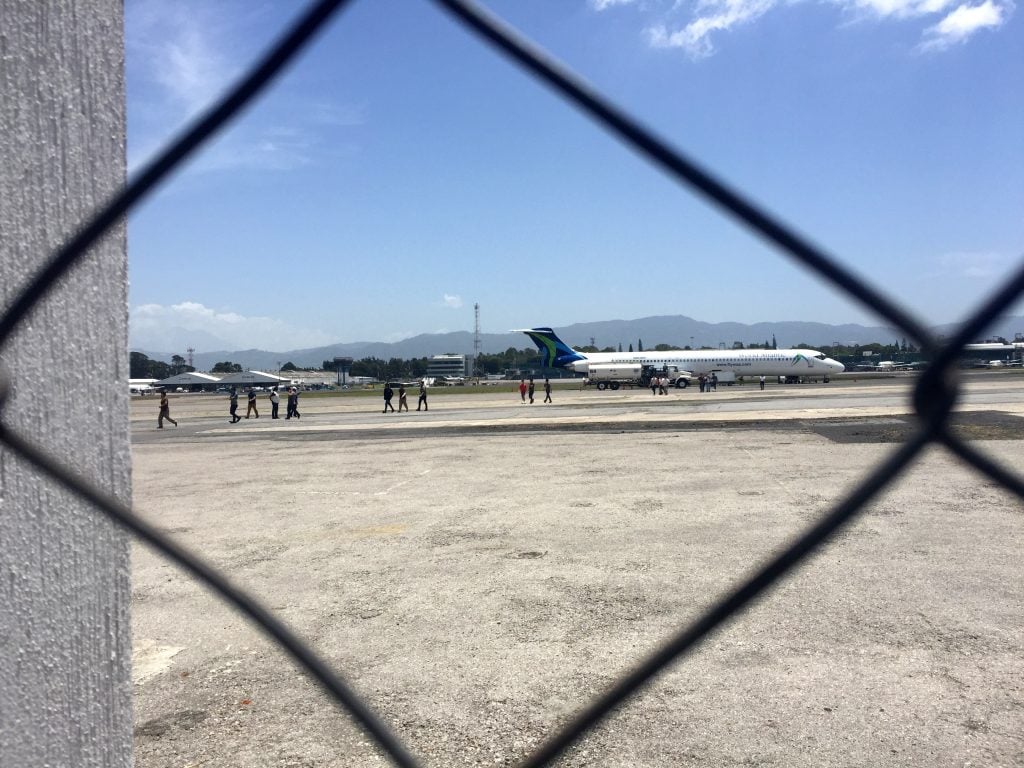 A plane charter by the U.S. government and carrying more than 100 deportees arrives at the Guatemalan Air Force base. Deportees walk across the tarmac before government officials process them inside. (Photograph by Ryan Hicks)

Once they walk off the white plane and across the tarmac, they enter a holding room with a brown bag sitting on each of the chairs. Guatemalan authorities provide a bottle of water, juice, and a sandwich—sometimes day-old and decomposing.

When they sit down, they see a row of kiosks. Authorities take their information and fingerprints. Police conduct a background check to see if the deportee faces any criminal charges in Guatemala, and if he or she does, is taken into custody.

They also see a sign that says, “Welcome to Guatemala. You are now in your country with your people.” An LED sign tells them the address of the air force base. But to add confusion to an already disorienting ordeal, the time on the clock is nine hours behind and the date reads “January 8, 2012.”

ALSO: The story behind the ‘little girl’ photo that’s turning the world against Trump’s border policy

While they wait, deportees pick up any medication they were given in the U.S. from health officials.

Before being released, officials hand out mesh bags containing what remains of each deportee’s possessions. Bags in hand, they line up against the door that separates them from the NGOs stationed in a separate outdoor area of the base waiting to offer them services.

Once they have accessed the help they need, they walk through a metal door and into the streets of downtown Guatemala City.

“People come tormented, anxious and worried because they do not know how to get back to their communities,” say Altán.

The first thing that hits you when the doors open and the deportees flood out is the smell. Imagine at least a hundred men who have not showered for days or weeks, some wearing the same clothes in which they crossed through the Rio Bravo.

Quickly though, you notice their faces. Many are disoriented, mixed with fatigue and relief.

You can also tell the difference between the people who authorities caught while crossing versus someone who has lived in the U.S. for longer.

“The migrant who is recently deported, recently crossed looks sad, tired, overwhelmed because they have debt, they mortgaged their home, and they’re still thinking that they have to go back and travel. Their interest is to go home, rest and try crossing again,” she says. Some even leave the confines of the air force base and head back northwards to try crossing again right away.

Those who have spent more time in the U.S. want more help, says Altán. “They want to make a phone call, to find a taxi because they have money and come with the desire to see their family, with a more positive attitude that someone who recently crossed [and was caught].”

Many men, like Samuel Noé Calanche Quiñonez, have lost weight. Their shirts hang off their shoulders like a coat hanger and their pants sit below their waist—some holding on to the belt loops so they don’t fall off.

He spent 10 days in custody in what deportees call “hieleras,” or ice boxes—rooms or cages pumped with cold air.

Several men showed Maclean’s what appears to be aluminum residue on their skin, which the deportees say came from the aluminum blanket U.S. authorities provide them in detention.

Before heading through the doors of the base, some stop and take advantages of local NGOs stationed on site: free phone calls to loved ones, help with transportation to their home regions, offers to connect them with jobs.

“You can give them a good reception and all that, but when they leave the base, the are confronted with the same reality,” says Father Verzeletti. “They are going to be in the street because there is a structural problem here that is not resolved.” 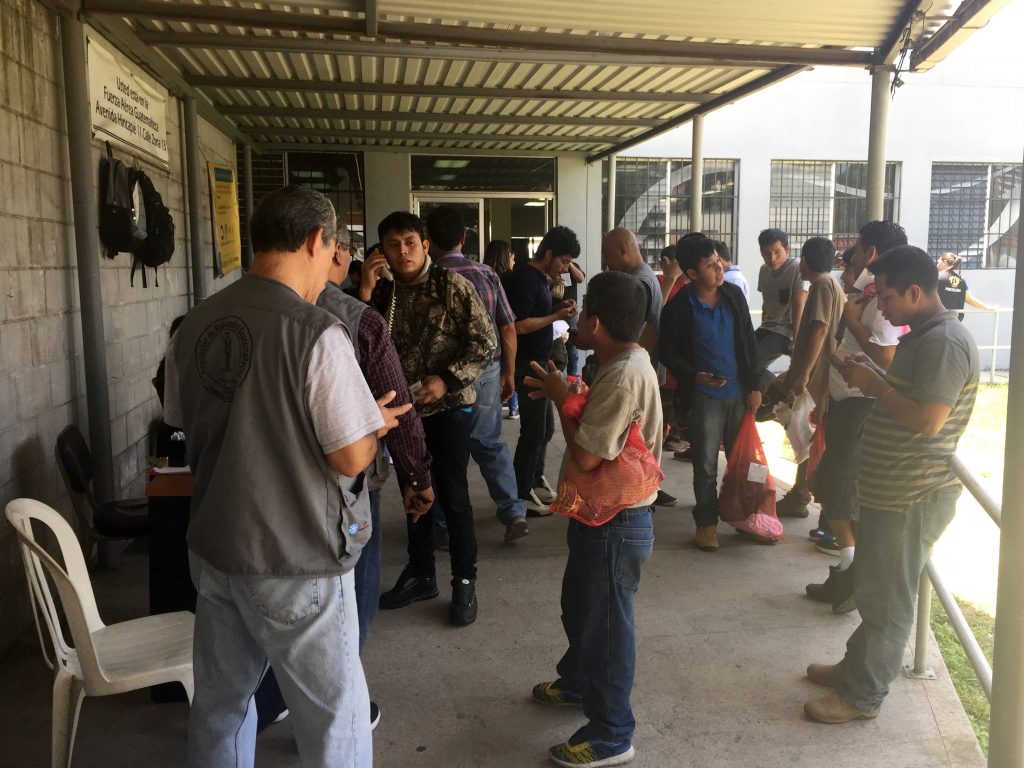 Outside the walls of the air force base, crowded around a metal doors, dozens of relatives and friends of deportees await their arrival. And the stories of failed migration are abundant.

Twenty-five year-old Emner López was deported a year ago after living in the U.S. for 10 years. He is waiting with mixed emotion for his uncle who is on the last flight of the day.

“The truth is I’m happy to see him again but at the same time sad for him because it’s not the same as over there,” he says.

López knows first-hand what lies ahead of his uncle. “I am going through the experience of trying to find work. This is why we migrate,” he says.

And he is not sure what his uncle is going to do after he arrives. “I don’t know if he’s going to stay here or try to go back because all his children are over there,” he says. “Living here is very difficult. Very.”

In some cases, the poor treatment of migrants in U.S. custody is working to deter them from attempting to migrate again. 18 year-old Calanche says he will not and instead is heading home to Petén, the country’s northern-most department.

Spending 10 days in five different “iceboxes,” eating three sandwiches a day, “doesn’t make you eager to go back,” he says. Once at home he says he will try to find work and if that does not work, he will start studying again. He has two more years until he completes mechanics school.

Mateo Hernandez on the other hand, as well as many others, plans on making the dangerous trek once again. The 21 year-old has not even left the confines of the air force base before telling me he is already planning on heading north.

“I’m going to rest three weeks and go back again,” says Hernandez, who lived in the U.S. for almost seven years and has a wife waiting for him back in Texas. “Right now, I have nothing.”

Ryan Hicks is a law student at McGill University in Montreal, journalist and 2018 McBurney Latin America Fellow. He is a former Quebec political correspondent for the CBC.