What 'the blob' tells us about ocean warming 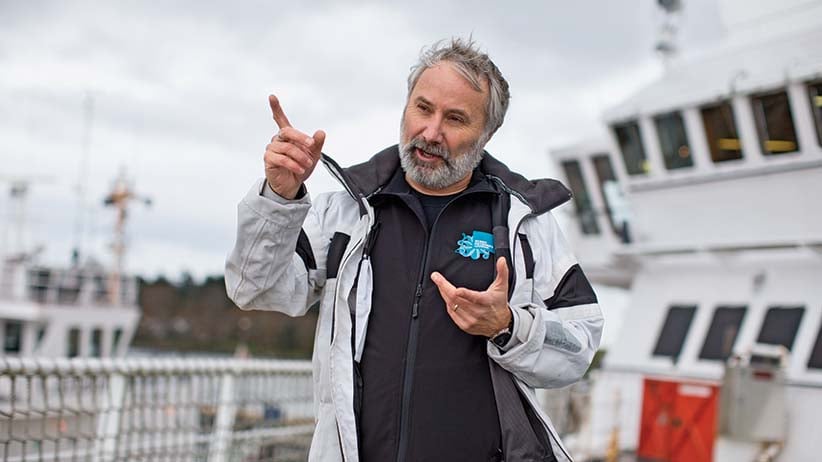 Oceanographer Richard Dewey is the associate director of science with Ocean Networks Canada, an initiative of the University of Victoria. Dewey is fascinated by an intensely warm ocean zone off the North American coast, dubbed “the blob.” It is wreaking havoc with the troubled Pacific, harming everything from salmon to killer whales; and it’s disrupting weather patterns across North America, causing droughts, intensifying hurricanes, plunging the northeast into record colds and helping to produce this year’s powerful El Niño. As the world prepares to convene in Paris for the UN Climate Change Conference, the blob provides a terrifying glimpse of what a changing climate might have in store. 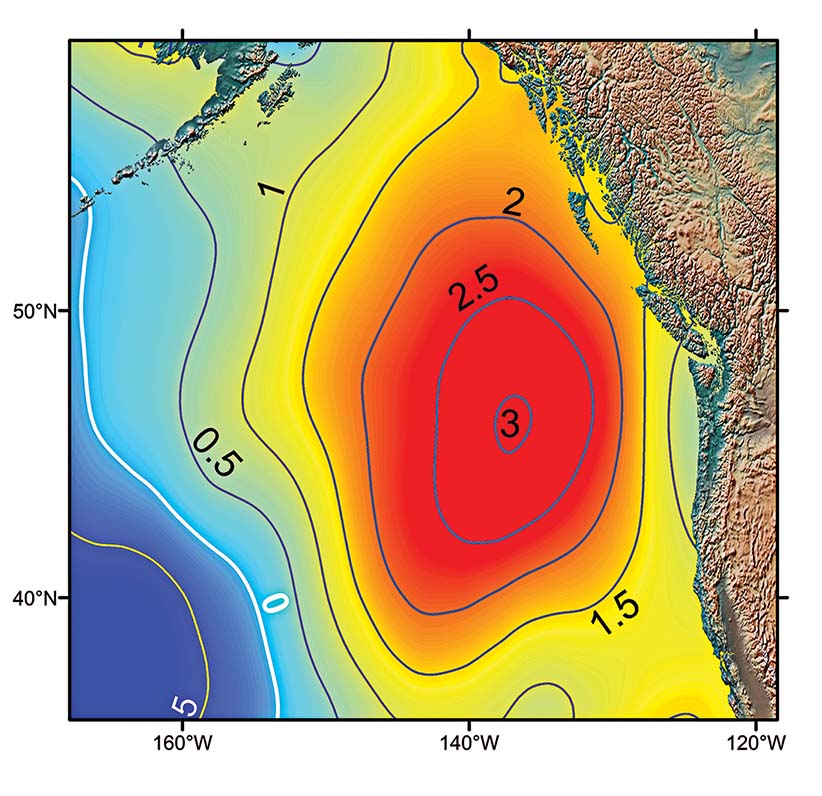 Q: What is the blob?

A: A very large region of the northeast Pacific Ocean that is significantly warmer than at any time in our recent records.

Q: How much warmer?

A: Almost 3° C. It’s really quite extraordinary. Statistically, it might be something we wouldn’t expect to see, even once in a millennium. And it’s lasted almost two years.

Q: Where is it, exactly?

A: It shows up as this huge bull’s eye in the North Pacific, centred in the Gulf of Alaska. It’s one million sq. km, roughly the size of Ontario, and it goes down beyond 100 m. It contains an extraordinary amount of heat.

Q: Do we know why it developed?

A: Typically in winter, in the northeast Pacific, the Aleutian Low, a large, low-pressure system known for cyclonic winds, mixes surface water in the north Pacific and brings up cold, nutrient-rich water from deep below. But the winter of 2013 was characterized by a very weak Aleutian Low and reduced ocean mixing—an extraordinary shift in atmospheric condition.

Q: And this is producing massive weather disruptions?

A: Yes. It’s caused Alaska to get warm, wet weather—very unusual for the northern state. The West Coast, from B.C. to California, has been bone-dry, with very long, dry, intensely hot summers and very mild winters, with essentially no snow. California has had the lowest snowpack and rainfall ever in the last two years. Fires continue to develop as a consequence of two years of intense droughts [there]. And it’s plunged central North America to record colds. All this is related to the blob and the associated atmospheric conditions.

Q: Do you have a theory for what caused the blob?

A: One possibility is that the major changes occurring in the Arctic are due to climate change over the last few decades. In 2012 [one year before the blob appeared], the Arctic Ocean recorded its lowest sea-ice extent on record. The whole northern hemisphere seems to have gone through extreme modifications as a result.

Q: Will the blob disappear?

A: As of this fall, it appears to be separating into a number of smaller, segmented blobs. I think that is good news: It could be breaking up. We’ll have to wait and see.

Q: Did the blob cause this year’s “Godzilla” El Niño, the biggest in 15 years?

A: There are good reasons to believe they’re connected—that this El Niño, which showed up a year-and-a-half after the blob, was in part initiated by it. It’s certainly contributed to the number and intensity of Pacific hurricanes this fall; they feed off warm ocean waters. When tropical storms travel over very warm water, they gain a tremendous amount of energy. Patricia went from a tropical storm to a very intense hurricane extremely rapidly as it passed over warm water off the Mexican coast in October.

Q: Looking ahead, what does all this mean?

A: That we need to be ready to adapt. Will California see more frequent and more severe droughts with climate change? That’s a possibility. Will changes in the Arctic keep Alaska warmer than usual? Possibly. Alaska would change dramatically, if it does. California needs snowpack in its mountains to fill its reservoirs. This is why we prefer to call it “climate change,” not “global warming.” The planet is not simply warming; rainfall and hydrological patterns are also changing. A change in rainfall might be more dramatic socially and environmentally than a two-degree change in temperature. That is key, and often overlooked.

Q: Can you explain the ways the blob is disrupting marine life?

A: The northeast Pacific is typically a very productive part of the ocean, with cold, nutrient-rich surface waters. But the absence of storms and strong winds meant the north Pacific did not mix nutrients from below. Usually, there’s a lot of krill-like zooplankton, the primary food for iconic species such as herring and salmon. But there has been almost no krill, so we’re seeing far fewer salmon returning to B.C. rivers this fall. And the few that are returning are showing up at 50 per cent their normal size. They really struggled to find sufficient food and build up the strength to make it to the rivers this fall. And they may not have the strength to reach spawning grounds.

Q: Southern resident killer whales eat almost nothing but salmon. Could the impacts be felt all the way up the food chain?

A: Certainly. In 2015, the coastal scientific community has been seeing extremely high fatalities of marine mammals, all the way from California to Alaska: Everything from sea lions and seals to large baleen whales—some of the top predators in the food chain. We’re still piecing together the puzzle. But when krill are not doing well in the north Pacific, that certainly filters all the way to top predators. That’s how the food chain works. At the same time, we’re seeing more jellyfish—many more jellyfish than krill. This is drawing more tropical species like sunfish and thresher sharks all the way to Alaska.

Q: Are businesses being affected?

A: In much of B.C., we’ve had almost two complete seasons without skiing. There was no snow. The hills were bare. Many resorts only opened for a week or two. There’s tremendous concern in the salmon-fishing community that this year’s return is quite reduced in the number and health of returning salmon. The warmer waters have also shut down shellfish fisheries. Aquaculture has been affected.

Q: Why is it crucial to understand the blob?

A: We haven’t seen anything quite this extraordinary before—ever. This could be a precursor of what climate change has in store.

Q: How do the two interact?

A: Climate change is a slow, steady background trend. But large-scale weather patterns may also be shifting. The shift we’ve seen over the last couple of years is certainly the largest in recent memory.

Q: What does that mean?

A: It could be a harbinger of things to come: It’s possible similar conditions could become more frequent, as we see the Arctic and other regions continue to change. Right now, we’re getting a glimpse into what the future might hold. We should prepare. Climate change is affecting large-scale atmospheric systems from the tropics to the Arctic. These extraordinary seasons could become the norm.

Q: Is the Pacific Ocean a cause for concern right now?

A: The Pacific is the largest body of water on the planet, covering almost one-third of the globe. What happens in the Pacific really does matter on a global scale, as we’re now seeing. We are learning first-hand a lot about how these large-scale atmosphere-ocean systems might respond under climate change—conditions most models don’t, or can’t, fully tell us. What we’ve seen in the last couple of years are new patterns, new behaviours. This could be what climate change is like.

Q: Are you concerned?

A: As a scientist, being able to watch and see the whole system change and reveal these new extraordinary patterns makes this an exciting time. But we need to be receptive, pay attention, not be too surprised when we are forced to experience change.

We’ve just lived the warmest 10 years on record. What have we learned? Can we adapt and minimize impacts? These represent enormous economic and social challenges. From a scientific perspective, we live in fascinating times. But as consumers, we have to adjust our thinking, be open to modifying our behaviours, and take some responsibility for what nature throws at us.