What you need to know about the protest in Hong Kong

A guide to the major issues and people in the dispute 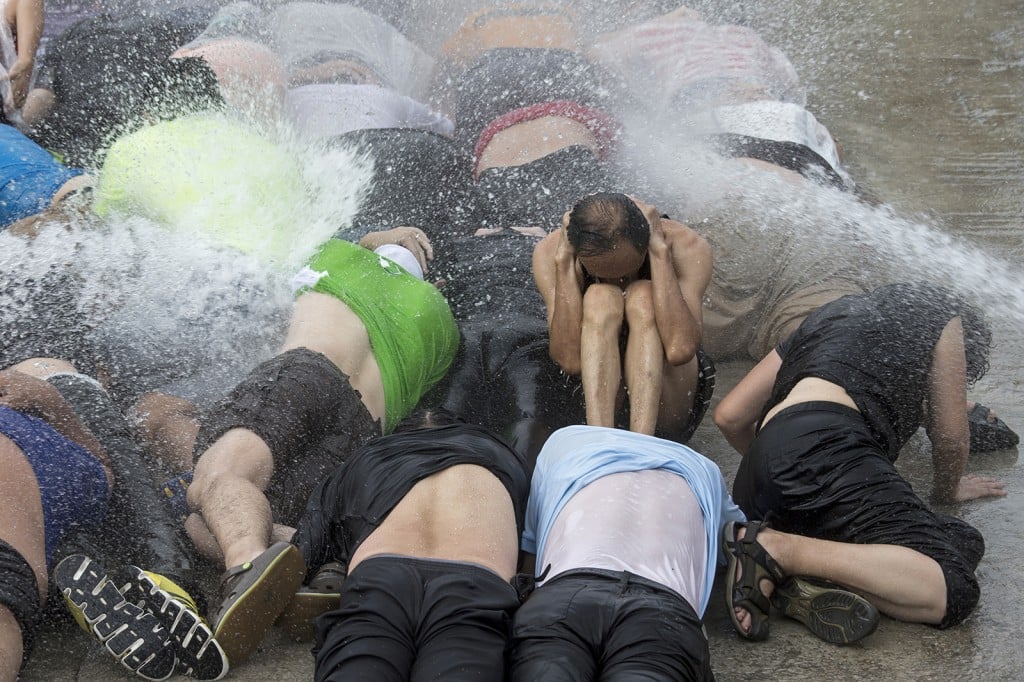 Pro-democracy activists brace themselves during a drill to simulate the scenario of being sprayed with a water cannon at the upcoming “Occupy Central” movement rally in Hong Kong. (The Associated Press)

HONG KONG — Pro-democracy protests in Hong Kong are drawing thousands of mostly young residents of this former British colony into the streets in a massive but peaceful movement of civil resistance to Beijing’s plans to screen candidates for the post of the city’s leader, or chief executive.

Here are the major issues and people in the dispute:

THE BACKGROUND
China took control in 1997 after agreeing to a policy of “one country, two systems” that gives the financial hub of 7.1 million a high degree of control over its own affairs and allows residents civil liberties absent on the Communist-ruled mainland. During Hong Kong’s 156 years under British rule, London chose the city’s governor in an arrangement that faced virtually no opposition, but residents now want more say in their government and future.

WHY THE PROTESTS?
The protesters are unhappy that Beijing has rejected open nominations for candidates for the first-ever elections for Hong Kong’s leader, promised for 2017. China wants candidates to be chosen by a committee of mostly pro-Beijing tycoons, a requirement many residents see as a reversal of promises for more democracy in their semi-autonomous territory. Some protesters are calling for the city’s unpopular chief executive, Leung Chun-ying, to step down.

WHAT’S HAPPENED SO FAR?
The protests began over a week ago as college students boycotted classes, but have gained support from other residents and political activists as the demonstrations spread across the city. On Sunday, police used pepper spray and tear gas to try to stop people from joining students who had gathered near the city government headquarters two days earlier. By Monday, thousands were still occupying major streets downtown, as police stood watch but took no overt action to force them out.

BEIJING’S DILEMMA
Since Xi Jinping took over as China’s president in 2013, the country’s leaders have tightened restrictions on public dissent, even in social media, imposing harsh prison sentences on activists and others seen as a threat to the Communist Party’s monopoly on power. The current protests, however, have created a political problem for Beijing. While China has to be careful not to crack down too harshly on the demonstrators in Hong Kong, whose free press ensures global visibility, it also is eager to end the protests in order to avoid emboldening mainland Chinese. So far, China has condemned the protests, but has not intervened.

HONG KONG’S TOP DOG
Leung Chun-ying, also known as C.Y. Leung, is a private businessman and former real estate executive with long-standing ties to Beijing. He has appealed to protesters to withdraw for the sake of Hong Kong’s image and stability.

LEADING STUDENT PROTESTER
Joshua Wong, a 17-year-old student protester, was a leader of the “Scholarism” movement, which opposed plans to require moral and patriotic education in Hong Kong. He was dragged away by police soon after students stormed into the government headquarters complex late Friday and was released from detention Sunday evening.

LEADING DEMOCRACY ACTIVIST
Benny Tai Yiu-ting, an associate law professor at the University of Hong Kong, began the peaceful civil disobedience movement Occupy Central With Love and Peace _ usually referred to as simply Occupy Central _ to resist Beijing’s tightening of its grip on the city and demand universal suffrage.

THE TYCOONS
Billionaire businessman Li Ka-shing, Asia’s wealthiest person, was among dozens of tycoons summoned to Beijing last week for meetings with top leaders as the political tensions in Hong Kong mounted. So far, Hong Kong’s capitalists have remained in the background as the protests have gathered momentum.